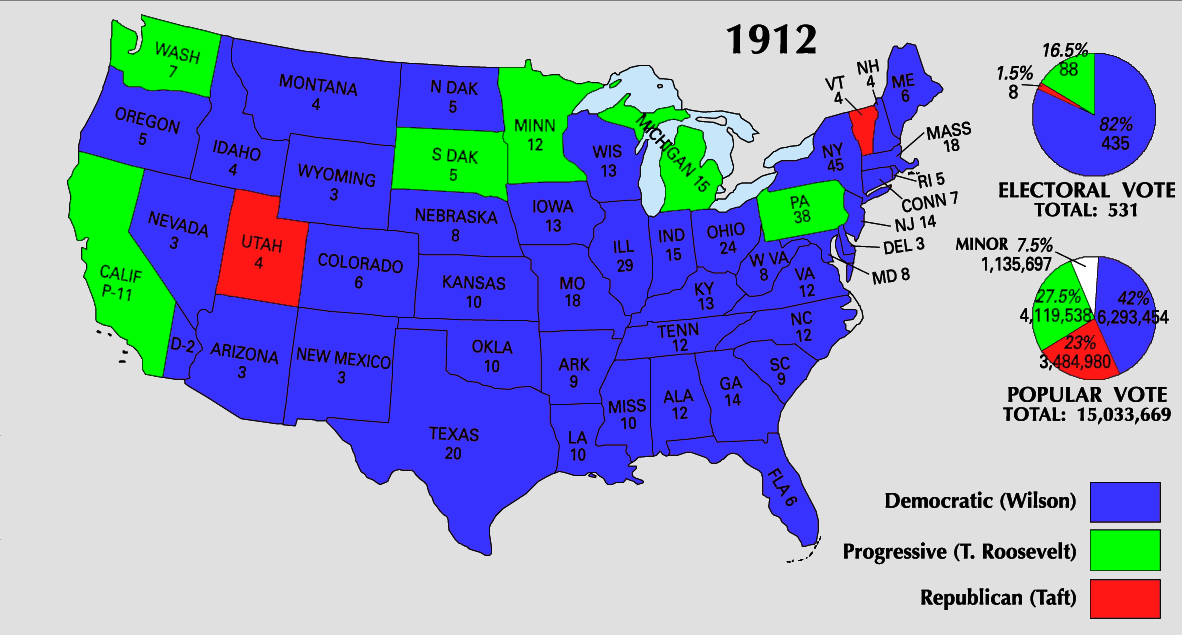 The United States presidential election of 1912 was fought among three major candidates, two of whom had previously won election to the office. Incumbent President was renominated by the Republican party with the support of the conservative wing of the party. After former President failed to get the Republican nomination, he called his own convention and created a new Progressive Party (nicknamed the “Bull Moose Party”). It nominated Roosevelt and ran candidates for other offices in major states. Democrat was nominated on the 46th ballot of a contentious convention, thanks to the support of . He defeated both Taft and Roosevelt in the general election, winning a huge majority in the despite only winning 42% of the popular vote, and initiating the only period between 1892 and 1932 when a Democrat was elected President. Wilson was the second of only two Democrats to be elected President between 1860 and 1932. This was also the last election in which a third party candidate came in second in the Electoral College.

President Theodore Roosevelt had declined to run for reelection in 1908, following the long-established tradition that Presidents were to leave office after two terms. He had tapped William Howard Taft as his successor, and Taft had gone on to win the election of 1908. During Taft's administration, a rift grew between Roosevelt and Taft; they became the leaders of the Republican Party's two wings: the progressives opposed the courts, favored restrictions the employment of women and children, favored conservation, were more favorable toward labor unions, and opposed tariffs on manufactured products. The conservatives were for business and insisted on judicial supremacy. Taft became identified with the conservative wing while Roosevelt was the leader of the progressive wing. By 1910 the split was deep.

For the first time some delegates to the national convention were elected in presidential preference primaries. were advocated by the progressive faction in the GOP, which wanted to break the control of political parties by bosses. Altogether, fourteen states held Republican primaries. won two of the first four primaries ( and ), and Taft won the other two early primaries ( and ). Beginning with his runaway victory in Illinois on April 9, however, Roosevelt won nine of the last ten presidential primaries (in order, , , , , , , , , and ), losing only to Taft.

The Republican Convention was held in from June 18 to June 22. Unfortunately for Roosevelt, Taft had started much earlier in rounding up delegates, and the delegates chosen by primary election were a minority. Taft had the support of the bulk of the party organizations in Southern states. These states had voted solidly Democratic in every presidential election since 1880, and Roosevelt objected that they were given one-quarter of the delegates when they would contribute nothing to a Republican victory (as it turned out, former Confederate states supported Taft by a 209-40 margin). When the Republican National Convention gathered, Roosevelt was challenging the credentials of nearly half of the delegates. By that time, however, it was too late. The delegates chose &mdash; once Roosevelt's top ally &mdash; to serve as chairman of the convention. Afterwards, the delegates seated Taft delegations in Alabama, Arizona, and California on tight contests of 597-472, 564-497, and 542-529, respectively. After losing California, where Roosevelt had won the primary, the progressive delegates gave up hope. They voted "present" on most succeeding roll calls. Not since the 1872 election had there been a major schism in the Republican party. Now, with the Democrats holding about 45% of the national vote, any schism would be fatal. Roosevelt's only hope at the convention was to form a "stop-Taft" alliance with LaFollette, but Roosevelt had alienated LaFollette, and the alliance could not form.

Unable to tolerate the personal humiliation he suffered at the hands of Taft and the Old Guard, and refusing to entertain the possibility of a compromise candidate, Roosevelt struck back hard. On the evening of June 22, 1912, Roosevelt asked his supporters to leave the Convention. Roosevelt maintained that President Taft had allowed fraudulent seating of delegates in order to capture the presidential nomination from progressive forces within the Party. Thus, with the support of convention chairman , Taft's supporters outvoted Roosevelt's men, and the convention renominated incumbents and , making Sherman the first Vice President since to be nominated for reelection.

Failing to make itself a believable third party, the Bull Moose Party ended up losing strength. Its candidates did poorly in 1914. It vanished in 1916 with most members following Roosevelt back into the Republican party. However, the Taft conservatives controlled the party and its platform after 1912, and thus some Progressives like joined the more liberal Democratic party.