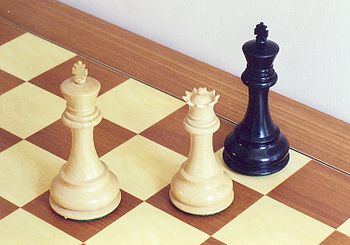 The black king has been checkmated; the game is over, assuming that there are no other pieces (not visible in the picture) that could capture the queen.

Checkmate (frequently shortened to mate) is a situation in chess (and in other boardgames of the chaturanga family) in which one player's king is threatened with capture (in check) and there is no way to meet that threat. Or, simply put, the king is under direct attack and cannot avoid being captured. Delivering checkmate is the ultimate goal in chess: a player who is checkmated loses the game. In normal chess the king is never actually captured – the game ends as soon as the king is checkmated because checkmate leaves the defensive player with no legal moves.[note 1] In practice, most players resign an inevitably lost game before being checkmated. It is considered bad etiquette to continue playing in a completely hopeless position (Burgess 2000:481).[note 2]

If a king is under attack but the threat can be met, then the king is said to be in check, but is not in checkmate. If a player is not in check but has no legal move (that is, every possible move would put the king in check), the result of the game is stalemate, and the game ends in a draw (but in other variants, it is a loss for the stalemated player). (See rules of chess.)

A checkmating move is denoted in algebraic chess notation with the hash symbol (#) – for example, 34.Qh8# or by "++". (The symbol "++" is sometimes used to indicate double check.)

A checkmate may occur in as few as two moves with all of the pieces still on the board (as in Fool's mate, in the opening phase of the game), in a middlegame position (as in the 1956 game called the Game of the Century between Donald Byrne and Bobby Fischer),[1] or after many moves with as few as three pieces in an endgame position.

In the first diagram, White checkmates easily by forcing the black king to the edge a rank at a time or a file at a time:

The checkmate with two queens or with two rooks is similar (Pandolfini 1988:20).

Checkmate can be forced even away from the edge of the board with two rooks and a king, or with a queen, rook, and king, while two queens are able to force checkmate in the center without the help of the king (Pandolfini 2009:32–33).

Here are the common fundamental checkmates when one side has only his king and the other side has only the minimum material needed to force checkmate, i.e. (1) one queen, (2) one rook, (3) two bishops on opposite-colored squares, or (4) a bishop and a knight. The king must help in accomplishing all of these checkmates. If the superior side has more material, checkmates are easier (Silman 2007:33).

The first two diagrams show representatives of the basic checkmate positions with a queen, which can occur on any edge of the board. Naturally, the exact position can vary from the diagram. In the first of the checkmate positions, the queen is directly in front of the opposing king and the white king is protecting its queen. In the second checkmate position, the kings are in opposition and the queen mates on the rank (or file) of the king. See Wikibooks - Chess/The Endgame for a demonstration of how the king and queen versus king mate is achieved.

With the side with the queen to move, checkmate can be forced in at most ten moves from any starting position, with optimal play by both sides, but usually fewer moves are required (Fine & Benko 2003:1–2). (Müller & Lamprecht 2001:16). In positions in which a pawn has just promoted to a queen, at most nine moves are required (Levy & Newborn 1991:144). In this position, White checkmates by confining the black king to a rectangle and shrinking the rectangle to force the king to the edge of the board:

The superior side must be careful to not stalemate the opposing king, whereas the defender would like to get into such a position. There are two general types of stalemate positions that can occur, which the winning side must avoid (Fine & Benko 2003:2).

The first diagram shows the basic checkmate position with a rook, which can occur on any edge of the board. The black king can be on any square on the edge of the board, the white king is in opposition to it, and the rook can check from any square on the rank or file (assuming that it can not be captured). The second diagram shows a slightly different position where the kings are not in opposition but the defending king must be in a corner.

With the side with the rook to move, checkmate can be forced in at most sixteen moves from any starting position (Fine & Benko 2003:2). Again, see Wikibooks - Chess/The Endgame for a demonstration of how the king and rook versus king mate is achieved.

White checkmates by boxing in the black king.

In this position, White checkmates by confining the black king to a rectangle and shrinking the rectangle to force the king to the edge of the board:

Here are the two basic checkmate positions with two bishops (on opposite-colored squares), which can occur in any corner. (Two or more bishops on the same color, which could occur because of pawn promotion, cannot checkmate.) The first is a checkmate in the corner. The second one is a checkmate in a side square next to the corner square. With the side with the bishops to move, checkmate can be forced in at most nineteen moves (Müller & Lamprecht 2001:17).

A second checkmate with two bishops

It is not too difficult for two bishops to force checkmate, with the aid of their king. Two principles apply:

Two bishops (and king) can force checkmate. From Seirawan.

In the position from Seirawan, White wins by first forcing the black king to the side of the board, then to a corner, and then checkmates. It can be any side of the board and any corner. The process is:

Note that this is not the shortest forced checkmate from this position. Müller and Lamprecht give a fifteen move solution, however it contains an inaccurate move by Black (according to endgame tablebases) (Müller & Lamprecht 2001:17). With optimal play by both sides, checkmate in this position requires seventeen moves. An optimal variation is

Of the basic checkmates, this is the most difficult one to force, because these two pieces cannot form a linear barrier to the enemy king from a distance. Also, the checkmate can be forced only in a corner that the bishop controls.

With the side with the bishop and knight to move, checkmate can be forced in at most thirty-three moves from any starting position (Müller & Lamprecht 2001:19), except those in which the defending king is initially forking the bishop and knight and it is not possible to defend both. However, the mating process requires accurate play, since a few errors could result in a draw either by the fifty-move rule or stalemate.

"...mastering it would take a significant chunk of time. Should the chess hopeful really spend many of his precious hours he's put aside for chess study learning an endgame he will achieve (at most) only once or twice in his lifetime?"

It is impossible to force checkmate with a king and two knights, although checkmate positions are possible (see the first diagram). In the second diagram, if Black plays 1... Ka8? White can checkmate with 2. Nbc7#, but Black can play 1... Kc8 and escape the threat. The defender's task is easy — he simply has to avoid moving into a position in which he can be checkmated on the next move, and he always has another move available in such situations (Speelman, Tisdall & Wade 1993:11).

In the third diagram, White can play 1. Nc6+ Ka8, but now if White plays 2. Nb5 threatening 3. Nc7#, Black is stalemated. It is sometimes possible to force checkmate with two knights against a pawn, because in some positions, having a pawn removes this stalemate defence.

Under some circumstances, two knights and a king can force checkmate against a king and pawn (or rarely more pawns). The winning plan, quite difficult to execute in practice, is to blockade the enemy pawn(s) with one of the knights, maneuver the enemy king into a stalemated position, then bring the other knight over to checkmate. (See two knights endgame.)

Three knights and a king can force checkmate against a lone king within twenty moves (assuming that the lone king cannot quickly win a knight) (Fine 1941:5–6). These situations are generally only seen in chess problems, since at least one of the knights must be a promoted piece, and there is very rarely a reason (e.g., avoidance of stalemate) to promote a pawn to anything other than a queen (see underpromotion).

White wins by Stamma's mate, with either side to move.

White also wins if Black is to move first:

This checkmate has occurred in actual games, see the game between Jesus Nogueiras and Maikel Gongora[2] from the 2001 Cuban Championship, (see diagram) which proceeded

There are also positions in which a king and a knight can checkmate a king and a bishop, knight, or rook; or a king and a bishop can checkmate a king with a bishop on the other color of squares or with a knight, but the checkmate cannot be forced if there is no other material on the board (see the diagrams for some examples). Nevertheless, it keeps these material combinations from being ruled a draw because of "insufficient mating material" or "impossibility of checkmate" under the FIDE rules of chess.[note 3]

In early Sanskrit chess (ca. 500-700) the king could be captured and this ended the game. The Persians (ca. 700-800) introduced the idea of warning that the king was under attack (announcing check in modern terminology). This was done to avoid the early and accidental end of a game. Later the Persians added the additional rule that a king could not be moved into check or left in check. As a result, the king could not be captured (Davidson 1949:22). Checkmate was thus the logical and only decisive way of ending a game (since if it was checkmate, any move would be illegal) (Davidson 1949:63–64).

Before about 1600 the game could also be won by capturing all of the opponent's pieces other than the king (annihilation or robado) (see bare king). In Medieval times players began to consider it nobler to win by checkmate, so annihilation became a half-win for a while, until it was abandoned (Davidson 1949:63–64).

Origin of the word

Moghadam traced the etymology of the word mate. It comes from a Persian verb mandan, meaning "to remain", which is cognate with the Latin word manco. It means "remained" in the sense of "abandoned" and the formal translation is "surprised", in the military sense of "ambushed" (not in the sense of "astonished"). So the king is in mate when he is ambushed, at a loss, or abandoned to his fate (Davidson 1949:70–71).

The term "checkmate" also has origins in the term "check", which means temporarily stop, and which also is in the chessplaying context related to the term "chess", which derives from the French word "echecs", which is derived from the alternating black and white pattern of an eschequier, or counting table, a pattern which was duplicated in larger form in some countries on the floor of the exchequer, a central bank, and whence such related terms as "checkers" and "checkered" were brought about.

The term checkmate in modern parlance is a dead metaphor for an irrefutable and strategic victory.[6]