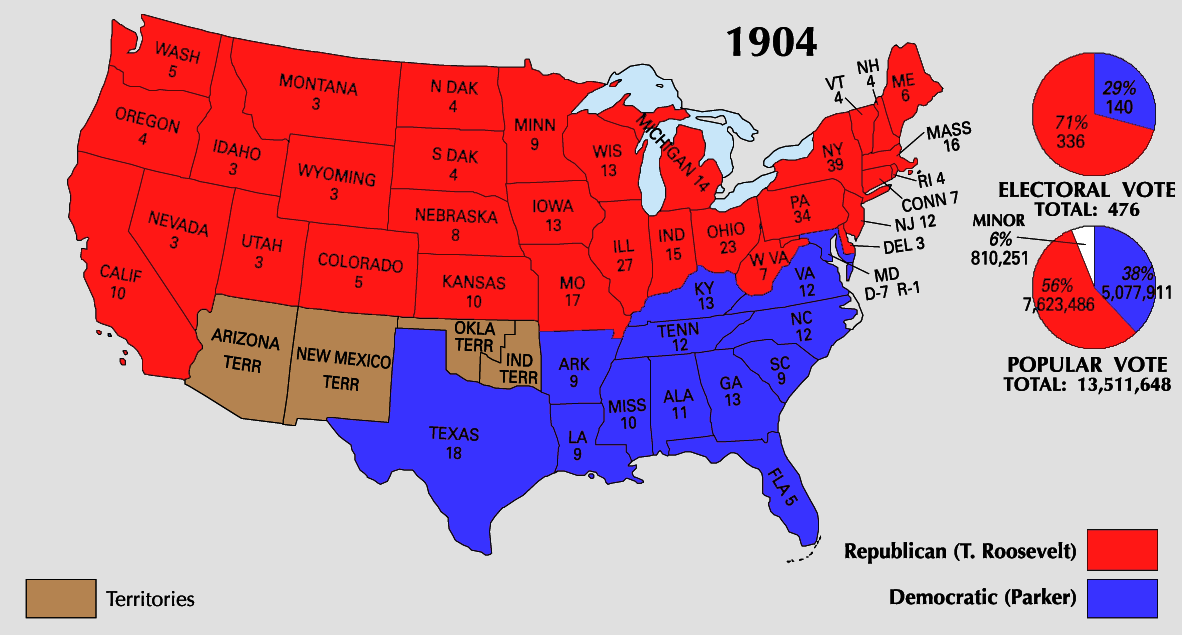 The United States presidential election of 1904 was held on November 8, 1904. Incumbent President , a Republican who had succeeded to the Presidency upon William McKinley's assassination, easily won a term of his own, thus becoming the first "accidental" president to do so.

With Roosevelt's popularity nearing its peak, , the nominee of 1896 and 1900, had decided to sit this one out, leaving what was considered the most worthless Democratic nomination since 1872 wide open. With former President refusing to come out of retirement as well, the Democrats met in Saint Louis in a surly and depressed mood. The only candidate who really wanted the nod was , but the delegates instead nominated an unknown named , a judge on New York state Court of Appeals, who accepted after he demanded, and got, an endorsement of the in the party's platform. 81-year-old millionaire industrialist of was nominated as his running mate, ostensibly to pay for the campaign with his own funds. During the campaign, he contributed $185,000 ($3.7 million in 2002 dollars), which was over a third of the very small election fund.

The Election of 1904 was the first election in which the Socialist Party participated. The was a highly factionalized coalition of local parties based in industrial cities and usually was rooted in ethnic communities, especially German and Finnish. It also had some support in old Populist rural and mining areas in the West. Prominent socialist Eugene Victor Debs was nominated for President and Benjamin Hanford was nominated for Vice President.

The lackluster Judge Parker made little headway against the wildly popular Roosevelt, who had already adopted popular reform positions such as increased regulation of the large corporations and conservation of natural resources, not to mention the "winning" of Panama, the Northern Securities suit, Conquest of the Philippines, the Venezuela affair, and so on and so forth. With the whole country cheering TR's campaign screeching "Perdicaris alive or Raisuli dead!" There was little Parker could do to avoid being run over.

There was a ray of hope for the Judge, however. 's carried a full page story about alleged corruption in the Bureau of Corporations. TR admitted certain payments had been made, but denied any "blackmail." Roosevelt was so beloved that the issue didn't have traction and Parker carried only the southern states, and the charismatic Roosevelt won the most decisive victory since 1872.

won in a landslide, taking every Northern and Western state. He also picked up Missouri.Source (Popular Vote): Leip PV source 2| year=1904| as of=July 28, 2005