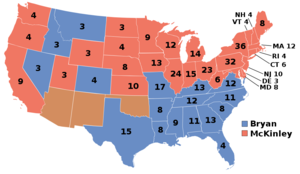 The United States presidential election of 1900 was held on November 6, 1900. It was a rematch of the 1896 race between Republican President and his Democratic challenger, . The return of economic prosperity and recent victory in the helped McKinley to score a decisive victory.

Republican candidates
*, President of the United States from

The 926 Republican delegates to the in renominated by acclamation. , the "boss" of the New York State Republican Party, did not like , New York's popular governor, even though he was a fellow Republican. Roosevelt's efforts to reform New York politics - including Republican politics - led Platt and other state GOP leaders to pressure President McKinley to accept Roosevelt as his new Vice-Presidential candidate, thus filling the spot left open when Vice President died in 1899. Although Roosevelt was reluctant to accept the vice-presidency, which he regarded as a relatively trivial and powerless office, his great popularity among most Republican delegates led McKinley to pick him as his new running mate. Ironically, Roosevelt would be elevated to the Presidency in September 1901 when McKinley was in .

The Populist Party, which four years earlier had supported Bryan, split into two factions. One group, the "Fusion" faction, wanted to merge with the Democrats. The Fusion faction held its convention in and nominated Bryan for President and Charles A. Towne for Vice President (Towne, the national chairman of the Silver Republican Party, later withdrew from the race). The "Middle of the Road" Populists wanted to maintain their identity as a separate political party; they met in Cincinnati and nominated and . The "Fusion" group was absorbed into the Democratic Party with this election; and though the "Middle of the Road" faction contested two future presidential elections, the Populists were no longer considered a serious political force after 1900. The Socialist Labor Party also divided; the larger faction formed the Social Democratic Party and nominated for president. This party was renamed the Socialist Party following the election. Both factions of the fielded candidates, though it was the last campaign of the National Prohibitionists. Other third party candidates included Seth H. Ellis of the Union Reform Party and Jonah F.R. Leonard of the United Christian Party.

The economy was booming in 1900, so the Republican slogan of “Four More Years of the Full Dinner Pail”, combined with victory in the brief in 1898, had a powerful electoral appeal. Teddy Roosevelt had become a national hero fighting in Cuba during the war, and as such he was a popular spokesman for the Republican ticket. In his speeches he repeatedly argued that the war had been just and had liberated the Cubans and Filipinos from Spanish tyranny: [ [Brands 1997: 400] ]

Four years ago the nation was uneasy because at our very doors an American island was writhing in hideous agony under a worse than medieval despotism. We had our Armenia at our threshold. The situation in Cuba had become such that we could no longer stand quiet and retain one shred of self-respect…. We drew the sword and waged the most righteous and brilliantly successful foreign war that this generation has seen.

Bryan's campaign was a reprise of his major issue from the 1896 campaign, . It was not as successful in 1900 because of the improved economy, and because gold was being inflated by new production from and , thus allowing more paper dollars to enter the national economy. Bryan's second major campaign theme attacked McKinley's ; Bryan argued that instead of liberating Cuba and the Philippines, the McKinley administration had simply replaced a cruel Spanish tyranny with a cruel American one. Bryan was especially harsh in his criticisms of the American military effort to suppress a bloody rebellion by Filipino guerillas. This theme won over some previous opponents, especially "hard money" Germans, former , and anti-imperialists such as .

Both candidates repeated their 1896 campaign techniques, with McKinley again campaigning from the front porch of his home in ; at its peak, he greeted sixteen delegations and 30,000 cheering supporters in one day. Meanwhile Bryan took to the rails again, traveling 18,000 miles to hundreds of rallies across the Midwest and East. This time, he was matched by , McKinley's running mate and the Governor of , who campaigned just as energetically in 24 states, covering 21,000 miles by train.

The triumph of the American army and navy in the war against Spain was a decisive factor in building Republican support. Democrats tried to argue that the war was not over because of the insurgency in the Philippines, which became their major issue. A perception that the Philippine War was coming to an end would be an electoral asset for the Republicans, and the McKinley administration stated that there were reductions of troops there. Republicans pledged that the fighting in the Philippines would die down of its own accord within sixty days of McKinley's reelection. [ [Miller 1982: 143] ; Detroit Evening News, September 7, 1900; San Francisco Call, September 8, 21, 1900; Boston Evening Transcript, September 20, 1900] However, as one lieutenant explained in a letter to his wife, “It looks good on paper, but there really has been no reduction of the force here. These battalions [being sent home] are made up on men…about to be discharged.” [ [Miller 1982: 148] ; Lt. Samuel Powell Lyon to his wife, April 12, 1900, Carlisle Collection]

In addition, Secretary of War Elihu Root had MacArthur's September 1900 report which he did not release until after the election. [ [Miller 1982: 143, 148] ] General Arthur MacArthur had been in command of the Philippines for four months, warning Washington that the war was not lessening and that the end was not even in sight. MacArthur believed that the guerrilla stage of the war was just beginning and that Filipinos were refining their techniques through experience. Furthermore, Philippine leader ’s strategy had popular support. MacArthur wrote:

The success of this unique system of war depends upon almost complete unity of action of the entire native population. That such unity is a fact is too obvious to admit of discussion; how it is brought about and maintained is not so plain. Intimidation has undoubtedly accomplished much to this end, but fear as the only motive is hardly sufficient to account for the united and apparently spontaneous action of several millions of people. One traitor in each town would eventually destroy such a complex organization. It is more probable that the adhesive principle comes from ethological homogeneity, which induces men to respond for a time to the appeals of consanguineous leadership even when such action is opposed to their interests and convictions of expediency. [ [Miller 1982: 150–151] ; 21 (1900): 605–606]

Nonetheless, the majority of soldiers in the Philippines did not support Bryan. Any mention of the election of 1900 in the soldiers' letters and diaries indicated overwhelming support for the Republican ticket of McKinley and Roosevelt. According to Sergeant Beverly Daley, even the “howling Democrats” favored McKinley. Private Hambleton wrote, “Of course, there are some boys who think Bryan is the whole cheese, but they don't say too much.” [ [Miller 1982: 187] ; Letters of Sergeant Beverly Daley, November 16, 1900, Private Hambleton, March 4, 1900.]

Despite Bryan's energetic efforts, the renewed prosperity under McKinley, combined with the public's approval of the , allowed McKinley to gain a comfortable victory. His popular and electoral-vote margins were both larger than in 1896; he even carried Bryan's home state of . As in 1896, Bryan did best in the traditionally Democratic "Solid South" and among farmers in the West.