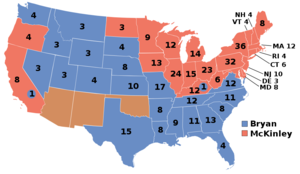 The United States presidential election of November 3, 1896 saw Republican defeat Democrat in a campaign considered by historians to be one of the most dramatic in American history. In the 1896 campaign is often considered to be a . McKinley forged a coalition in which businessmen, professionals, skilled factory workers and prosperous farmers were heavily represented; he was strongest in the Northeast, , and Pacific Coast states. Bryan was the nominee of the Democrats, the Populist Party, and the Silver Republicans. He was strongest in the South, rural Midwest, and Rocky Mountain states. Economic issues, including , the , , and the tariff, were crucial. Republican campaign manager invented many modern campaign techniques, facilitated by a $3.5 million budget. He outspent Bryan by a factor of five. The Democratic Party's repudiation of the (their pro-business wing, represented by incumbent President ), set the stage for sixteen years of Republican control of the White House, ended only by a Republican split in 1912 that resulted in the election of Democrat . However, although Bryan lost the election, his coalition of "outsiders" would dominate the Democratic Party well into the twentieth century, and would play a crucial role in the liberal economic programs of Presidents , , , and .

When the Democrats met for their convention in , most of the Southern and Western delegates were committed to implementing the free silver ideas of the . The convention repudiated President Cleveland's gold standard policies and then repudiated Cleveland himself. This, however, left the convention wide open: there was no obvious successor to Cleveland.

An attorney, former and unsuccessful U.S. Senate candidate named filled the void. A superb , Bryan hailed from and was widely regarded as a prominent spokesman for millions of Americans who were suffering from the following the . At the Democratic Convention, Bryan delivered what many historians regard as one of the greatest political speeches in American history, the "Cross of Gold" Speech. In this speech Bryan offered a passionate defense of farmers and factory workers struggling to survive the economic depression, and he attacked big-city business owners and leaders as the cause of much of the economic suffering. He called for reform of the monetary system, an end to the , and promised government relief efforts for farmers and others hurt by the economic depression. Bryan's speech was so dramatic that after he had finished many delegates carried him on their shoulders around the convention hall. The speech also united the convention delegates and earned Bryan their presidential nomination; he defeated his closest competitor, former Senator Richard "Silver Dick" Bland by a 3-to-1 margin. , a wealthy shipbuilder from , was chosen as the vice presidential nominee. It was felt that Sewall's wealth might encourage him to help pay some campaign expenses. At just 36 years of age, Bryan was—and remains—the youngest man ever nominated by a major party for President.

Despite Bryan's nomination, some Democrats continued to support President Cleveland and the . The "Cleveland Democrats" opposed Bryan's endorsement of and also resisted Bryan's push for the federal government to play a larger role in regulating the national economy. These "Gold Democrats" formed a third-party, the National Democratic Party, to promote their views. They chose a presidential ticket headed by John M. Palmer, a former governor of Illinois, for president and , a former governor of Kentucky, for vice-president. The National Democrats did not carry any states, but they did divide the Democratic vote in some states and inadvertently helped the Republicans to carry such states as Kentucky and California, among others.

Several third-parties were active in 1896. By far the most prominent was the the . Formed in 1892, the Populists represented interests in the South, West, and rural Midwest. In the 1892 presidential election Populist candidate had carried four Western states, and in 1894 the Populists had scored victories in congressional and state legislature races in a number of Southern and Western states. By 1896 some Populists believed that they could replace the Democrats as the main opposition party to the Republicans. However, the Democrat's nomination of Bryan—who agreed with many Populist goals and ideas—placed the party in a dilemma. Torn between choosing their own presidential candidate and supporting Bryan, the party leadership decided that nominating their own candidate would simply divide the forces of reform and give the election to the more conservative Republicans. At their national convention in 1896 the Populists chose Bryan as their presidential nominee. However, to demonstrate that they were still independent from the Democrats, the Populists also chose Georgia Senator as their vice-presidential candidate instead of Arthur Sewall. Bryan eagerly accepted the Populist nomination, but was vague as to whether, if elected, he would choose Watson as his Vice-President instead of Sewall. With this election the Populists began to be absorbed into the Democratic Party; within a few elections the party would disappear completely.

Other notable third-party efforts were presented by the Socialist Labor, Prohibition, National Prohibition and National Democratic parties each offering tickets for President and Vice President. The [http://www.ourcampaigns.com/RaceDetail.html?RaceID=273015 Silver Party] endorsed the Democratic ticket.

The primary issue of the 1896 campaign involved this economic question: would America remain on the , as McKinley and the Republicans wished, or would the nation's economy switch to following the theories espoused by Bryan and the Populists? Bryan argued that by leaving the gold standard and having paper money backed by silver instead of gold, it would allow more paper currency to enter the national economy (a popular Bryan slogan was "16-to-1", based on the claim that 16 silver-backed dollars could be printed for every one dollar backed by gold). Bryan and his supporters argued that this "easy money" would allow impoverished farmers in the South and West to get out of debt and pay their bills, and that having more paper money circulating in the economy would help lift the nation out of the economic depression which had started in 1893. However, McKinley and the Republicans responded that the gold standard was vital to the American economy, and that if the nation went off the gold standard paper currency would lose its value by half. To ridicule what they believed were Bryan's radical and unwise economic policies, the Republicans printed fake dollar bills which had Bryan's face and which read "IN GOD WE TRUST...FOR THE OTHER 53 CENTS", thus illustrating their claim that a dollar bill would be worth only 47 cents if it was backed by silver instead of gold.

Since he was being outspent by the Republicans by a five-to-one margin, Bryan decided his best chance to win the election was to conduct a vigorous national speaking tour by train; in that way he could speak to the voters directly. He was the first presidential candidate to travel across the nation and meet voters in person; prior to 1896 it had been considered undignified for presidential candidates to widely travel before an election. Nevertheless, Bryan's imposing voice and height made a deep impression on many who thronged to hear him. The novelty of such an event, combined with Bryan's spellbinding oratory and the passion of his beliefs, led to huge crowds turning out to see him. In many parts of the South and West Bryan supporters welcomed him with parades, speeches, and wild demonstrations of support. Although Bryan traveled to most sections of the nation, he focused his efforts on the , which he believed would be the decisive battleground in the election. In just 100 days, Bryan gave over 500 speeches to several million people, a remarkable feat at the time.

In contrast to Bryan's dramatic efforts, McKinley conducted a traditional "front porch" campaign from his home in . Instead of having McKinley travel to see the voters, Mark Hanna brought thousands of voters by train to McKinley's home; once there McKinley would greet the groups of voters and give a speech to them from his porch. McKinley labeled Bryan's proposed social and economic reforms as a serious threat to the national economy. With the depression following the Panic of 1893 coming to an end, support for McKinley's more conservative economic policies increased, while Bryan's more radical policies began to lose support among Midwestern farmers and factory workers. To ensure victory, Hanna paid large numbers of Republican orators (including ) to travel around the nation denouncing Bryan as a dangerous radical. There were also reports that some potentially Democratic voters were intimidated into voting for McKinley. For example, some factory owners posted signs the day before the election announcing that, if Bryan won the election, the factory would be closed and the workers would lose their jobs. McKinley gained a narrow but solid victory, carrying the core of the East and Northeast, while Bryan did well among the farmers of the South, West, and rural Midwest. The large German-American voting bloc supported McKinley, who gained large majorities among the middle class, skilled factory workers, railroad workers, and large-scale farmers. However, in the national popular vote the election was close, as McKinley took 51% to Bryan's 47%. In the McKinley received 271 electoral votes to Bryan's 176 (224 were needed to win).