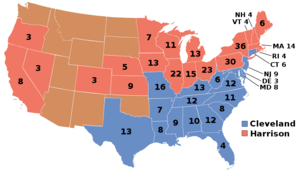 The ticket of and captured nearly a quarter million popular votes as the movement gained steam. Another group, the , was formed with as their nominee. The Union Labor Party garnered nearly 150,000 popular votes, but failed to gain widespread national support.

Cleveland set the main issue of the campaign when he proposed a dramatic reduction in tariffs in his annual message to Congress in December 1887. Cleveland contended that the tariff was unnecessarily high and that unnecessary taxation was unjust taxation. The Republicans responded that the high tariff would protect American industry from foreign competition, guaranteeing high wages, high profits, and high growth. The argument between protectionists and free traders over the size of the tariff was an old one, stretching back to the . In practice the tariff was practically meaningless on industrial products, since the United States was the low-cost producer in most areas (except woolens), and could not be undersold by the less efficient Europeans. Nevertheless the tariff issue motivated both sides to a remarkable extent.

Besides the obvious economic dimensions, the tariff argument also possessed an ethnic dimension. At the time, the policy of was most strongly promoted by the British empire, and so any political candidate who ran on free trade instantly was under threat of being labelled pro-British and thereby losing the swing Irish-American voting bloc. Cleveland neatly neutralized this threat by pursuing punitive action against Canada (which was still viewed as part of the British empire) in a fishing rights dispute.

Harrison was well funded by party activists and mounted an energetic campaign by the standards of the day, giving many speeches from his front porch in Indianapolis which were covered by the newspapers. Cleveland adhered to the tradition that presidential candidates did not campaign, and forbade his cabinet from campaigning as well, leaving his 75 year old vice presidential candidate Thurman as the spearhead of his campaign.

One of the most notorious electoral frauds was perpetrated for this election in . , Treasurer of the Republican National Committee, wrote a circular letter to Indiana's county chairmen telling them to "Divide the floaters into , and put a trusted man with the necessary funds in charge of these five, and make them responsible that none get away and that all vote our ticket."

A California Republican named George Osgoodby wrote a letter to Sir , the British ambassador to the U. S., under the assumed name of "Charles F. Murchison". "Murchison" described himself as a former Englishman who was now a California citizen and asked how he should vote in the upcoming presidential election. Sir Lionel wrote back and indiscreetly suggested that Cleveland was probably the best man from the British point of view.

The Republicans published this letter just two weeks before the election, where it had an effect on Irish-American voters exactly comparable to the "Rum, Romanism, and Rebellion" blunder of the previous election: Cleveland lost New York state and the presidency and Sackville-West was sacked as British ambassador. [ [Butterfield 1947 p. 253] and [Shenkman 2004] ]

Cleveland was defeated. He actually led in the popular vote over Benjamin Harrison (48.6% to 47.8%), but Harrison won the Electoral College by a 233-168 margin, largely by virtue of his 1% win in Cleveland's home state of New York. Had Cleveland won his home state, he would have won the electoral vote by a count of 204-197 (201 votes then needed for victory). Note that Cleveland earned 24 of his electoral votes from states that he won by less than 1% (Connecticut, Virginia, and West Virginia).

Cleveland thus became one of only four men (Andrew Jackson in 1824, Samuel Tilden in 1876, and Al Gore in 2000) to clearly win the popular vote but lose the presidency. As Frances Cleveland and the ex-president left the White House, she assured the staff that they would return in four years, which they did.

In 1968 the produced the , "" which centers around the election of 1888 and the annexing and subdividing of the into states (which was a central issue of the election).