Donald William Wuerl (born November 12, 1940) is an American cardinal of the Catholic Church. He is the sixth and current Archbishop of Washington, serving since 2006. He previously served as Auxiliary Bishop of Seattle (1986-87) and Bishop of Pittsburgh (1988-2006). He was created a cardinal by Pope Benedict XVI in 2010.

Donald Wuerl was born in Pittsburgh, Pennsylvania, the second of four children of Francis J. and Mary Anna (née Schiffauer) Wuerl.[1] He has two brothers, Wayne and Dennis, and a sister, Carol.[2] His father worked nights weighing freight cars for the Pennsylvania Railroad, and served in the Navy during World War II.[2] His mother died in 1944, and his father married Kathryn Cavanaugh in 1946.[2]

Wuerl received his early education at the parochial school of St. Mary of the Mount Church in the Mount Washington neighborhood of Pittsburgh, graduating in 1958.[3] He then attended the Catholic University of America in Washington, D.C., where he was a Basselin Scholar at the Theological College.[4] He there earned a Bachelor's degree (1962) and Master's degree (1963) in philosophy.[5]

He was ordained a priest on December 17, 1966.[6] His first assignment was as assistant pastor at St. Rosalia parish in Pittsburgh's Greenfield neighborhood and as secretary to then-Pittsburgh bishop John Wright, who was elevated to cardinal in 1969; Wuerl was his full-time secretary in Vatican City from 1969 until Wright's death in 1979.

Because Cardinal Wright had to use a wheelchair due to his severe arthritis in 1978, Wuerl, as Wright's secretary, was one of three non-cardinals permitted inside the conclave, which selected Karol Wojtyla as Pope John Paul II.[7]

Wuerl was rector at St. Paul Seminary in Pittsburgh from 1981 to 1985. In 1982, he was made executive secretary to Bishop John Marshall for a papally mandated study of U.S. seminaries.

Wuerl was appointed titular bishop of Rosemarkie and auxiliary bishop of the Archdiocese of Seattle on December 3, 1985,[6] which was controversial, in that he was to take over much of Archbishop Raymond Hunthausen's authority by being given "complete and final decision-making power" in several key areas.[8] He was given complete authority over liturgy, the archdiocesan tribunal, seminarians and priestly formation, laicized priests, and issues of health care and ministry to homosexuals.

Wuerl launched and hosted a television program, The Teaching of Christ, in 1990 and wrote an adult catechism with the same name. He taught at Duquesne University in Pittsburgh as a distinguished service professor. Wuerl has served as a chaplain since 1999 for the Order of Malta, Federal Association, U.S.A., a division of the Sovereign Military Order of Malta, commonly referred to as the Knights of Malta.[10] Wuerl has also written regular columns in Columbia, the major publication of the Knights of Columbus in the United States.[11]

Wuerl closed 73 church buildings, which included 37 churches, and reduced 331 parishes by 117 through merging while bishop of Pittsburgh; he was managing the remaining 214 parishes when he left in June 2006.[12] Wuerl's plan, The Parish Reorganization and Revitalization Project,[13] is now used as a model for other dioceses seeking parish suppression. The mansion that housed Wuerl for over two decades as well as his four predecessors in the Diocese of Pittsburgh was sold since the new bishop, David Zubik, decided to live at St. Paul's Seminary. The Jacobethan Revival house along Fifth Avenue, at 9,842 square feet (914.4 m2) with 39 rooms, which include 11 bedrooms, six full baths, and a half-bath, had an appraised value of $1.5 million and is one of the largest homes in the Shadyside neighborhood of Pittsburgh.[14] As of March 2009, the property was listed for sale at $2.5 million; it formerly enclosed an extensive collection of antiques, Oriental rugs, and art during Wuerl's residency.[15] The property was sold to an anonymous private trust for over $2 million.[16]

Wuerl was installed as archbishop of Washington on June 22, 2006[6] at the Basilica of the National Shrine of the Immaculate Conception and received the pallium from Pope Benedict XVI on June 29, 2006.

In April 2008, Wuerl, as archbishop of Washington, hosted the Apostolic Visit of Pope Benedict XVI to the District of Columbia, which included a visit to the White House, the celebration of Vespers at the Basilica of the National Shrine of the Immaculate Conception, Mass at the new Nationals Park, and an address at The Catholic University of America.

Wuerl has been chairman of the board of directors at the National Catholic Educational Association since December 12, 2005.[17][18] He is also chancellor at the Catholic University of America. In September 2010, Wuerl was appointed by the Congregation for the Doctrine of the Faith delegate in the United States to facilitate the implementation of the Apostolic Constitution Anglicanorum Coetibus issued Pope Benedict XIV in November 2009 to provide for those Anglican faithful who desire to enter into the full communion of the Catholic Church in a corporate manner. . He also heads the U.S. bishops’ ad hoc committee created for such implementation. Other members of the ad hoc committee are Bishop Kevin William Vann of Fort Worth, Texas, and Bishop Robert Joseph McManus of Worcester, Massachusetts. The committee will be assisted by Father Scott Hurd.[19]

From 1994 until 2003, as Bishop of Pittsburgh, Cardinal Wuerl served as a Member of the Board of Governors of The Pontifical North American College in Rome (Chairman, 1998–1999), representing the Pennsylvania-New Jersey Region (Region III) of the United States Conference of Catholic Bishops. In 2008, as Archbishop of Washington he was again elected to the College's Board of Governors, this time representing the Washington, DC-Delaware-Maryland-Virginia-West Virginia region of the Converence (Region IV).

Elevation to College of Cardinals

On November 20, 2010, Pope Benedict XVI elevated Archbishop Wuerl to the College of Cardinals in a public consistory held at Saint Peter's Basilica in Vatican City, Rome. He was created Cardinal-Priest of S. Pietro in Vincoli, (Saint Peter in Chains), in Rome. In December 2010 Cardinal Wuerl was appointed a member of the Congregation for the Clergy and the Pontifical Council for Promoting Christian Unity.[citation needed]

On Monday, October 24, 2011, the Holy Father, His Holiness, Pope Benedict XVI, named Cardinal Wuerl to be the Relator-General of the 2012 World Synod of Bishops meeting on the New Evangelization.[20] 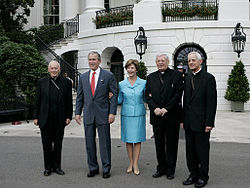 He is considered to be theologically conservative but not authoritarian. He supports determining whether a pro-choice Catholic politician should be denied Communion on an individual basis, once saying, "Our primary job is to teach and try to convince people. The tradition in our country has not been in the direction of refusing Communion, and I think it's served us well."[21]

During Fall 2009, the D.C. City Council proposed and ultimately passed a same-sex marriage bill. In November 2009, Wuerl signed an ecumenical statement known as the Manhattan Declaration calling on evangelicals, Catholics and Orthodox not to comply with rules and laws permitting abortion, same-sex marriage and other matters that go against their religious consciences.[22] The Catholic Church teaches that marriage is between a man and a woman and that the extension of the civil definition of marriage to same-sex couples undermines the common good of society as a whole.[23] In the debate on the D.C. same-sex marriage bill, the Archdiocese of Washington advocated for religious liberty provisions that would protect the Church's ability to provide social services (i.e. adoption) in accordance with Catholic teaching on marriage.[24] After the Washington Post characterized the archdiocese as giving an "ultimatum" to the city,[25] Wuerl clarified the Church's position in a letter to the Post, stating there was "no threat or ultimatum to end services, just a simple recognition that the new requirements by the city for religious organizations to recognize same-sex marriages in their policies could restrict our ability to provide the same level of services as we do now."[26] In December 2009, on the day of the bill's passage, same-sex marriage advocates still claimed that Wuerl had "refused to alter his official position" to reduce social services in the archdiocese.[27] On the same day the archdiocese, though expressing its view that the bill did not adequately protect religious liberty, nonetheless affirmed its commitment to serving the needs of the poor and its hope for "working in partnership with the District of Columbia consistent with the mission of the Catholic Church."[28] However, reflecting the requirements of the newly-enacted law upon adoption services in the District of Columbia, Catholic Charities of the Archdiocese of Washington was forced to end its foster care and public adoption program because it could not license same-sex couples for the program.[29]

Some traditionalist Catholics criticized a letter that Wuerl issued in response to Summorum Pontificum. The letter stated that "his permission must be received prior to making any permanent commitments by a parish for the public celebration, on a regular basis, of the 1962 form of the Roman liturgy as an extraordinary form of the Roman Rite." Wuerl argued in his letter that this restriction is in accord with Article 5 of Summorum Pontificum, which states that "public or regularly scheduled Masses be offered under the guidance of the bishop in accordance with canon 392, avoiding discord and favoring the unity of the whole Church."[30]

The full text of Article 5, Section 1 of Summorum Pontificum is as follows. It contains both the admonition to pastors to establish an extraordinary form when there is a stable group of faithful, and the provision that the pastor act under the guidance of his bishop in the manner Wuerl establishes:

Art. 5. § 1 : In parishes, where there is a stable group of faithful who adhere to the earlier liturgical tradition, the pastor should willingly accept their requests to celebrate the Mass according to the rite of the Roman Missal published in 1962, and ensure that the welfare of these faithful harmonises with the ordinary pastoral care of the parish, under the guidance of the bishop in accordance with canon 392, avoiding discord and favouring the unity of the whole Church.

Pastoral letters as Archbishop of Washington