In the United States presidential election of 1844, Democrat James K. Polk defeated Whig Henry Clay in a close contest that turned on foreign policy, with Polk favoring the annexation of Texas and Clay opposed.

Democratic nominee James K. Polk ran on a platform that embraced American territorial expansionism, an idea soon to be referred to as Manifest Destiny. At their convention, the Democrats called for the annexation of Texas and asserted that the United States had a “clear and unquestionable” claim to “the whole” of Oregon. By informally tying the Oregon boundary dispute to the more controversial Texas debate, the Democrats appealed to both Northern expansionists (who were more adamant about the Oregon boundary) and Southern expansionists (who were more focused on annexing Texas as a slave state). Polk went on to win a narrow victory over Whig candidate Henry Clay, in part because Clay had taken a stand against expansion, although economic issues were also of great importance. (The slogan "Fifty-four Forty or Fight!” is often incorrectly regarded as being part this president's election campaign rhetoric; it became a popular slogan in the months after the election, used by those proposing the most extreme solution to the Oregon boundary dispute).

The incumbent President in 1844 was John Tyler, who had ascended to the office of President upon the death of William Henry Harrison. Although Tyler had been nominated on a Whig ticket, his policies had alienated the Whigs and they actually expelled him from the party on September 13, 1841. Without a home in either of the two major parties, Tyler sought an issue that could create a viable third party to support his bid for the presidency in 1844.

Tyler found that issue in the annexation of Texas. When Texas achieved independence in 1836, it initially sought to be annexed by the United States. Opposition from the northern states prevented the United States from acting favorably on this request, and in 1838 Texas withdrew its request. There the issue lay until 1843, when Tyler and his newly-appointed Secretary of State, Abel P. Upshur, raised the matter again and started negotiations on annexation. When Upshur was killed in an accident on February 28, 1844, the treaty was almost complete. Tyler appointed John C. Calhoun Secretary of State as Upshur's replacement, and Calhoun completed the treaty; it was presented to the Senate on April 22. However, Calhoun had also sent a letter to British Minister Richard Pakenham that charged the British with attempting to coerce Texas into abolishing slavery. This claim was used to justify the annexation as a defensive move to preserve southern slavery. Calhoun presented the letter to Senate along with the treaty. Going into the presidential campaign season, Texas annexation was thus explicitly tied to southern slavery and suddenly emerged as the top issue. 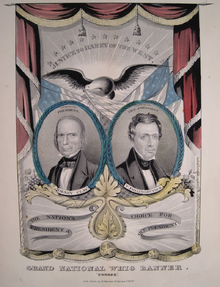 The Whigs held their convention on May 1. Clay, the party's most prominent congressional leader, was chosen on the first ballot despite having lost two prior presidential elections: in 1824 to John Quincy Adams as a Democrat-Republican, then in 1832 to Andrew Jackson as a National Republican. Theodore Frelinghuysen was nominated as Clay's running mate.

The Democrats met in Baltimore on May 27.

While Van Buren held a slim majority of delegates, his public stand against immediate annexation had increased the hostility of the opposition. Early in the convention, the delegates drew up rules for approving the platform and the candidate. At the instigation of Robert J. Walker of Mississippi, the convention re-established the rule that a Democratic candidate must receive a 2/3 majority of delegates to receive the nomination. (Ironically, the rule had first been used in 1832 to secure the nomination of Van Buren to the Vice Presidency over John C. Calhoun.) This fatally wounded Van Buren's candidacy; as it became clear that too many delegates were hostile to Van Buren for him ever to receive the necessary majority, his support collapsed.

Finally, on the eighth ballot, a new name was introduced: James K. Polk, who had intended to seek the vice presidential nomination. While he did not receive the necessary votes to win on this ballot, the momentum was clearly in his direction, and he won the necessary 2/3 on the following ballot, making Polk the first “dark horse” candidate.

The Democrats chose Silas Wright as Polk's running mate, but Wright refused the nomination. George Mifflin Dallas, who had finished a close second to Wright in the balloting, was then offered a spot on the ticket, and he accepted.

When advised of his nomination via letter, Polk replied: “It has been well observed that the office of President of the United States should neither be sought nor declined. I have never sought it, nor should I feel at liberty to decline it, if conferred upon me by the voluntary suffrages of my fellow citizens.” 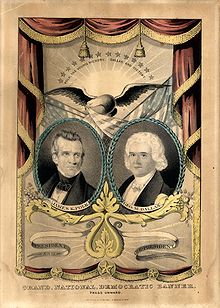 The National Democratic Tyler Convention assembled in Baltimore on May 27 and May 28, the same time as the Democratic National Convention. It nominated Tyler for a second term, but did not recommend a choice for Vice President. It is possible that the convention hoped to influence the Democratic National Convention.[1] Tyler was at first enthusiastic about his chances and accepted their nomination; his address was referenced in the New Hampshire Patriot and State Gazette on June 6, but the paper did not print the text of Tyler's letter. 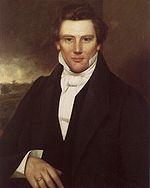 Joseph Smith, Jr., mayor of Nauvoo, Illinois and founder of the Latter Day Saint movement, ran as an independent. He proposed the redemption of slaves by selling public lands and decreasing the size and salary of the United States Congress; the closure of prisons; the annexation of Texas, Oregon, and parts of Canada; the securing of international rights on high seas; free trade; and the re-establishment of a national bank.[2] The campaign ended when he was assassinated while in prison on June 27, 1844. 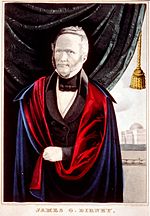 ] ran as the anti-slavery Liberty Party candidate, garnering 2.3% of the popular vote, and over 8% of the vote in Massachusetts, New Hampshire and Vermont. The votes he won were more than the difference in votes between Henry Clay and James K. Polk; some scholars have argued that Birney's support among anti-slavery Whigs in New York swung that decisive state in favor of Polk (see below). 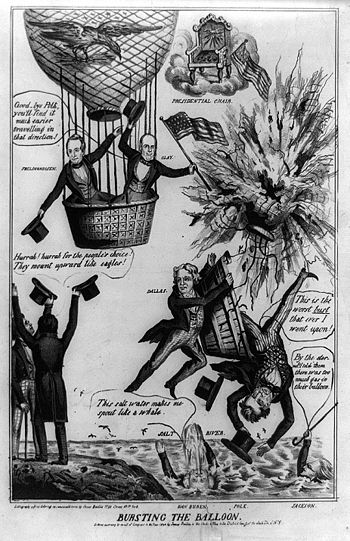 Tyler spent much of the summer with his new bride on their honeymoon in New York City. While there, he discovered that his support was quite soft. He also received appeals from Democrats to withdraw, including a letter from Andrew Jackson.[3] Tyler wrote a letter in which he withdrew from the race around August 25; it was announced in several newspapers on August 29, including the New Hampshire Patriot and State Gazette, the Berkshire County Whig, and the Barre Gazette. The New Hampshire Patriot and State Gazette stated that Tyler withdrew for fear that his candidacy would divide the votes going to Polk, and potentially lead to the election of Clay.

The Whigs initially played on Polk's comparative obscurity, asking “just who is James K. Polk?” as part of their campaign to get Clay elected.

Polk was committed to territorial expansion and favored the annexation of Texas. To deflect charges of pro-slavery bias in the Texas annexation issue, Polk combined the Texas annexation issue with a demand for the acquisition of the entire Oregon Territory, which was at the time jointly administered by the United States and the United Kingdom. This proved to be an immensely popular message, especially compared to the Whigs' economic program. It even forced Clay to move on the issue of Texas annexation, saying that he would support annexation after all if it could be accomplished without war and upon “just and fair” terms.

The election was very close run. The anti-slavery Liberty Party may well have played the role of spoiler:[4] in New York state, Birney received 15,800 votes—significantly more than Polk's slim margin of victory (5,100 votes). A victory in New York would have given Clay a decisive 141-134 edge in the electoral college. Some historians have therefore speculated that Clay's ambiguous stance on Texas cost him critical anti-slavery votes in New York, and tipped the overall election to the Democrats. On the other hand, Clay won an extremely narrow victory in largely pro-Texas Tennessee (123 votes); if he had adopted a more forthright anti-Texas position, he may well have lost that state's 13 electoral votes, enough to give the election back to Polk in any case.

(a) The popular vote figures exclude South Carolina where the Electors were chosen by the state legislature rather than by popular vote. 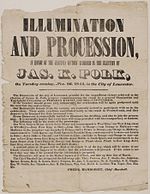 Polk's election confirmed the American public's desire for westward expansion. The annexation of Texas was formalized on March 1, 1845 before Polk even took office. As feared, Mexico refused to accept the annexation and the Mexican-American War broke out in 1846. With Polk's main issue of Texas settled, instead of demanding all of Oregon, he compromised and the United States and United Kingdom negotiated the Buchanan-Pakenham Treaty, which divided up the Oregon Territory between the two countries.