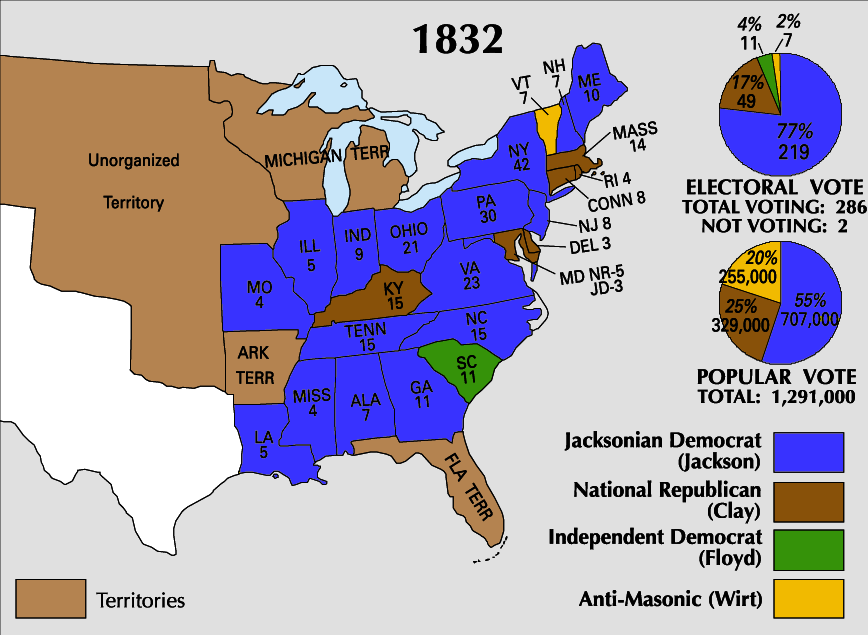 The United States presidential election of 1832 saw incumbent President , candidate of the Democratic Party, easily win reelection against of . Jackson won 219 of the 286 electoral votes cast, easily defeating Clay, the candidate of the National Republican party and candidate William Wirt. John Floyd, who was not a candidate, received the electoral vote of South Carolina.

This was the first national election for of , who was put on the ticket to succeed and four years later would succeed Jackson as President. Van Buren faced opposition for the Vice Presidency within his own party, however, and as a result 30 Pennsylvania electors cast ballots for native son William Wilkins.

The death of the in 1824 had left a void: there was no institutional method on the national level for determining the nominees for President. This void was filled by a political innovation; for the first time in United States history, the candidates were chosen by national conventions. The first national convention was held by the in in September 1831. The National Republican Party and the Democratic Party soon imitated them, also holding conventions in Baltimore. [Chase, James S. "Emergence of the Presidential Nominating Convention, 1789-1832" (1973).]

* , Supreme Court Justice from
* , former Secretary of the Treasury from
* William Wirt, former Attorney General from

The first Anti-Masonic candidates ran in the spring elections of 1828; Solomon Southwick was the candidate for Governor of New York and received 12% of the vote [http://www.ourcampaigns.com/RaceDetail.html?RaceID=111824] . Nationally, the Anti-Masonic Party was organized in a national convention held from September 11 to September 18, 1831 in Philadelphia, Pennsylvania. Ninety-six delegates attended from 10 states and the Michigan Territory. At this time, "conventions" were an innovative means of gathering people to discuss common interests; other conventions of the era included those for agricultural or social causes. A little over a year later, the Party was to hold the first national nominating convention in the history of the United States.

The first Anti-Masonic Party national nominating convention was held in the Athenaeum in Baltimore, Maryland from September 26, 1831 to September 28, 1831. There were 111 delegates present from 13 states (all from free states except for Maryland and Delaware). The delegates met behind closed doors for several days before the convention officially opened, in which the convention made some initial decisions. Several unofficial presidential ballots and one official ballot were taken, in which William Wirt defeated Rush, McLean for the nomination. The official ballot results were

The Barbour Democratic National Convention was held in June 1832 in . Jackson was nominated for president and Philip P. Barbour was nominated for vice president. Although Barbour withdrew, the ticket appeared on the ballot in five states (, Georgia, , , ).

The election campaign revolved around the . Jackson, who disliked banks and paper money in general, vetoed the renewal of the Bank's charter and withdrew federal deposits from the bank. Clay hoped to divide Jackson's supporters and curry favor in , the bank's headquarters, by attacking Jackson. His supporters attacked Jackson's use of presidential veto power, showing him as “King Andrew”. However, the attacks on Jackson generally failed, in spite of heavy funding by the bank, as Jackson convinced the ordinary population that he was defending them against a privileged elite. Jackson campaign events were marked by enormous turnout, and he swept Pennsylvania and the vast majority of the country.