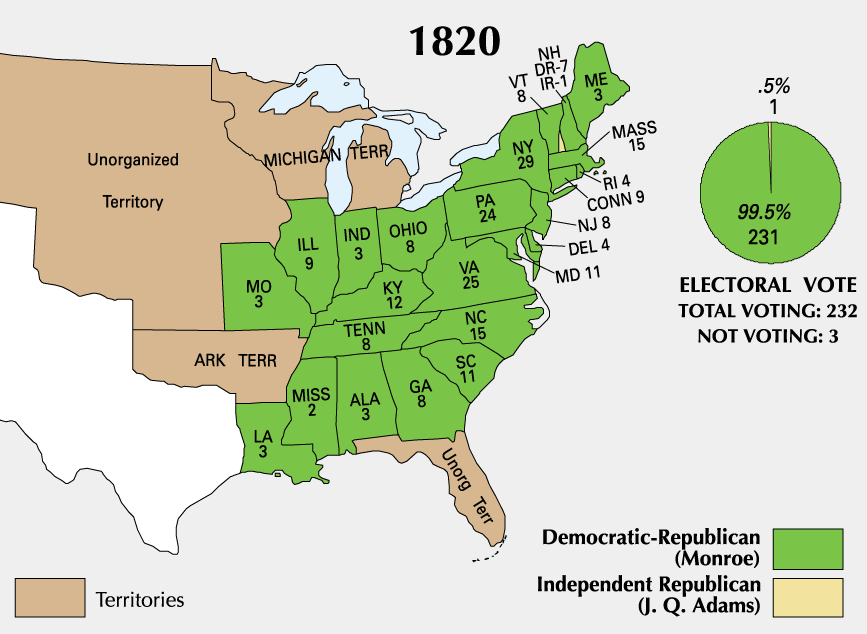 President and Vice President were re-elected without a serious campaign.

Despite the continuation of single party politics (known in this case as the ), serious issues emerged during the election in 1820. The nation had endured a widespread depression following the and the momentous issue of the extension of slavery into the territories was taking center stage. Nevertheless, James Monroe faced no opposition party or candidate in his reelection bid.

According to a popular story of the time, , an elector from cast a single ballot for to ensure that Washington would be the only president elected unanimously. Other reports assert that he was instead calling attention to his friend Adams as a potential future presidential candidate, or to protest against the "wasteful extravagance" of the Monroe Administration. [ [www.nevadaseniors.com/archive/NSC20060914.pdf "How Important is One Vote?"] "The NSC Foghorn" newsletter.]

had been entitled to 22 electoral votes four years earlier, but cast only 15 in 1820. This diminishing of power was brought about by the of that year that had made the region of — long part of Massachusetts — a free state to balance the pending admission of slave state .

, and also participated in their first presidential election in 1820, but it would be almost 15 years before another state was admitted to the Union. [ [http://www.u-s-history.com/pages/h261.html Election of 1820] ]

Since President Monroe's renomination was never in doubt, few Republicans bothered to attend the nominating caucus in April 1820. Only 40 delegates attended, with few or no delegates from the large states of Virginia, Pennsylvania, North Carolina, Massachusetts, and New Jersey. Rather than name the president with only a handful of votes, the caucus declined to make a formal nomination. Richard M. Johnson offered the following resolution: "It is inexpedient, at this time, to proceed to the nomination of persons for the offices of President and Vice President of the United States." After debate, the resolution was unanimously adopted, and the meeting adjourned. Thus, President Monroe and Vice President Daniel D. Tompkins became de facto candidates for reelection.

There was effectively no campaign, since there was no serious opposition to Monroe and Tompkins.

On March 9, 1820, Congress had passed a law directing to hold a convention to form a constitution and a state government. This law stated that “…the said state, when formed, shall be admitted into the Union, upon an equal footing with the original states, in all respects whatsoever.” [cite book |author=United States Congress |others=Act of March 6, ch. 23, vol. 3 |title=United States Statutes at Large |url=http://memory.loc.gov/cgi-bin/query/r?ammem/hlaw:@field(DOCID+@lit(sj06845)) |accessdate=2006-08-09 |year=1820 |pages=545–548] However, Congress reconvened in November 1820, the admission of Missouri became an issue of contention. Proponents claimed that Missouri had fulfilled the conditions of the law and therefore it was a state; detractors contended that certain provisions of the Missouri constitution violated the United States Constitution.

By the time Congress was due to meet to count the electoral votes from the election, this dispute had lasted over two months. The counting raised a ticklish problem: if Congress counted Missouri's votes, that would count as recognition that Missouri was a state; on the other hand, if Congress failed to count Missouri's vote, that would count as recognition that Missouri was not a state. Knowing ahead of time that Monroe had won in a landslide and that Missouri's vote would therefore make no difference in the final result, the Senate passed a resolution on February 13, 1821 stating that if a protest were made, there would be no consideration of the matter unless the vote of Missouri would change who would become President. Instead, the President of the Senate would announce the final tally twice, once with Missouri included and once with it excluded. [cite book |author=United States Congress |others=16th Congress, 2nd Session, February 13 |title=Senate Journal |url=http://rs6.loc.gov/cgi-bin/query/r?ammem/hlaw:@field(DOCID+@lit(sj01070)) |accessdate=2006-07-29 |year=1821 |pages=187–188]

The next day this resolution was introduced in the full House. After a lively debate, it was passed. Nonetheless, during the counting of the electoral votes on February 14, 1821, an objection was raised to the votes from by Representative of New Hampshire. He argued that since Missouri had not yet officially become a state that Missouri had no right to cast any electoral votes. Immediately, Representative John Floyd of Virginia argued that Missouri's votes must be counted. Chaos ensued, and order was only restored with the counting of the vote as per the resolution and then adjournment for the day. [cite book |publisher=Gales and Seaton |others=16th Congress, 2nd Session, February 14, 1821 |title=Annals of Congress |url=http://rs6.loc.gov/cgi-bin/query/r?ammem/hlaw:@field(DOCID+@lit(sj01070)) |accessdate=2006-07-29 |year=1856 |pages=1147–1165]

The sole electoral vote against Monroe came from , an elector from and former United States senator and New Hampshire governor. Plumer cast his electoral ballot for then-Secretary of State John Quincy Adams. While some accounts say that this was to ensure that Washington remained the only American president unanimously chosen by the Electoral College, others assert that he was instead calling attention to his friend Adams as a potential future presidential candidate or protesting against the "wasteful extravagance" of the Monroe Administration. [ [www.nevadaseniors.com/archive/NSC20060914.pdf "How Important is One Vote?"] "The NSC Foghorn" newsletter.] Plumer also eschewed voting for Tompkins for Vice President as "grossly intemperate" and having "not that weight of character which his office requires," and also "because he grossly neglected his duty" in his "only" official role as president of the senate by being "absent nearly three-fourths of the time"; [ [http://www.senate.gov/artandhistory/history/common/generic/VP_Daniel_Tompkins.htm "Daniel D. Tompkins, 6th Vice President (1817-1825)"] United States Senate web site. On the other hand, an editorial in the "New York Herald-Tribune" on June 21, 1932, argued that "The name of Daniel Tompkins deserves to be more kindly remembered than it has been."] Plumer instead voted for Richard Rush.

Even though every member of the Electoral College was pledged to James Monroe, there were still a number of Federalist electors who voted for a Federalist vice president. The votes for Richard Stockton came from Massachusetts. The entire Delaware delegation voted for Daniel Rodney for Vice President. Finally, Robert Goodloe Harper's vice presidential vote was cast by an elector from his home state of Maryland.

(a) "Only 15 of the 24 states chose electors by popular vote."
(b) "Those states that did choose electors by popular vote had widely varying restrictions on suffrage via property requirements."
(c) "There was a dispute as to whether Missouri's electoral votes were valid, due to the timing of its assumption of statehood. The first figure excludes Missouri's votes and the second figure includes them."

(a) "There was a dispute over the validity of Missouri's electoral votes, due to the timing of its assumption of statehood. The first figure excludes Missouri's votes and the second figure includes them."

(a) "There was a dispute over the validity of Missouri's electoral votes, due to the timing of its assumption of statehood. The first figure excludes Missouri's votes and the second figure includes them."