The Director of National Intelligence (DNI), is the United States government official subject to the authority, direction and control of the President, who is responsible under the Intelligence Reform and Terrorism Prevention Act of 2004 for:

Under 50 U.S.C. § 403-3a, it is desired that either the Director or the Principal Deputy Director of National Intelligence be an active duty commissioned officer in the armed forces or have training or experience in military intelligence activities and requirements. Only one of the two positions can be held by an officer at any given time. The statute does not specifically state what rank the commissioned officer will hold during his tenure in either position, but trends lean towards an officer holding the rank of a four-star general or admiral. The most recent DNI was retired Navy four-star admiral, Dennis C. Blair, whose resignation became effective May 28, 2010.[3] On July 20, 2010, the President nominated retired Lt. Gen. James R. Clapper for the position. Clapper was confirmed by the Senate on August 5, 2010, replacing acting Director David C. Gompert.

Establishment of the DNI position was one of the recommendations in the report by the 9/11 Commission investigating the September 11 attacks. The report, which was released on July 22, 2004, identified major intelligence failures that called into question how well the Intelligence Community protected US national and homeland security interests against attacks by foreign terrorists.

Soon thereafter Senators Dianne Feinstein, Jay Rockefeller and Bob Graham introduced legislation to create a Director of National Intelligence, S. 2645, introduced on June 19, 2002. Other, similar, legislation soon followed. After considerable debate on the scope of the DNI's powers and authorities, the United States Congress passed the Intelligence Reform and Terrorism Prevention Act of 2004 by votes of 336-75 in the House of Representatives, and 89-2 in the Senate. President George W. Bush signed the bill into law on December 17, 2004. Among other things, the law established the DNI position as the designated leader of the United States Intelligence Community and prohibited the DNI from serving as the CIA Director or the head of any other Intelligence Community element at the same time. In addition, the law required the CIA Director to "report" his agency's activities to the DNI.

On February 17, 2005, President George W. Bush named U.S. Ambassador to Iraq John Negroponte to the post, pending confirmation by the Senate. It was reported that President Bush's first choice for Director of National Intelligence was former Director of Central Intelligence Robert M. Gates, who was serving as president of Texas A&M University; however, Gates declined the offer.[7] Negroponte was confirmed by a Senate vote of 98 to 2 in favor of his appointment on April 21, 2005, and was sworn in by President Bush on that day.

On February 13, 2007, John Negroponte was sworn in as Deputy Secretary of State, and John Michael McConnell became the 2nd Director of National Intelligence.

Donald M. Kerr was confirmed by the U.S. Senate to be Principal Deputy Director of National Intelligence on Thursday, October 4, 2007. He was sworn in on Tuesday, October 9, 2007.

Kerr, of Virginia, was most recently the Director of the National Reconnaissance Office, and he was previously the Deputy Director for Science and Technology at the U.S. Central Intelligence Agency (CIA). Earlier in his career, he was the Assistant Director of the Justice Department's Federal Bureau of Investigation (FBI). He received his Ph.D. from Cornell University.

Declan McCullagh at News.com wrote on August 24, 2007 that the DNI site apparently was configured to repel all search engines to index any page at DNI.gov. This effectively made the DNI web site invisible to all search engines and in turn, any search queries.[8]

Ross Feinstein, the Spokesman for the DNI said that the cloaking was removed as of Monday, September 3, "We're not even sure how (the robots.txt file) got there" – but it was again somehow hidden on September 4. Another blog entry by McCullagh on September 7, states that the DNI site should, again, now be open to search engines.[9]

Office of the Director of National Intelligence (ODNI)

The Intelligence Reform and Terrorism Prevention Act of 2004 established the Office of the Director of National Intelligence (ODNI) as an independent agency to assist the DNI. The budget for the ODNI – and the Intelligence Community equal 43.5 billion. The ODNI has about 1,500 employees.[citation needed] The National Counterterrorism Center is a major organization within the ODNI.

On March 23, 2007, DNI Mike McConnell announced organizational changes, which include:

The Office of the National Counterintelligence Executive is also responsible to the DNI. 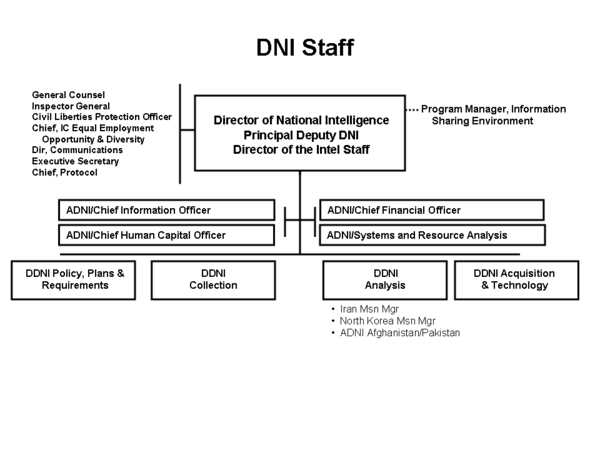 Director of the Intelligence Staff

The Office of the Director of the Intelligence Staff (DIS) is responsible for synchronizing and integrating efforts across the DNI staff and components. Offices that fall under the DIS include:

The Office of the DDNI for Collection looks across the entire collection business enterprise to develop corporate understanding of needs, requirements, and capabilities to ensure that a holistic view is taken on current and future collection systems. The Deputy Director for Collection brings together key IC stakeholders to get senior level insight into issues.[12]

The DDNI for Collection is supported by four Assistant Deputies:

Directors of the Intelligence Staff