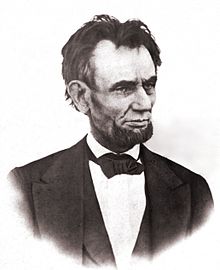 Abraham Lincoln, who shaved his beard into a goatee at various points during his presidency.

Goatee refers to a style of facial hair incorporating hair on a man’s chin. The exact nature of the style has varied according to time and culture.

Traditionally, goatee refers solely to a beard formed by a tuft of hair on the chin. In modern American English, it is often used to refer to the style of facial hair traditionally called the Vandyke, a combination of a goatee and a mustache.

The style dates back to Ancient Greece and Ancient Rome, where the god Pan was traditionally depicted with one. When Christianity became the dominant religion and began coopting imagery from pagan myth, Satan was given the likeness of Pan, leading to Satan traditionally being depicted with a goatee in medieval and renaissance art, an image which persists into the modern era.[1]

The goatee became popular again in the late 19th century, becoming one of the characterizing physical traits of the bohemians in Paris. In America, Abraham Lincoln wore a goatee at various points in his presidency.

The goatee would not become popular again until the 1940s, when it became a defining trait of the beatniks in post-World War II America. The style remained popular amongst the counter culture until the 1960s and then fell out of popularity again.