The Messerschmitt Me 264 Amerika was a long-range maritime reconnaissance aircraft developed during World War II for the German Luftwaffe. It was intended to support U-boat operations far into the Atlantic, serving both as a scout to direct the attack, as well as launching attacks of its own.

The design was later selected as a competitor in the Reichsluftfahrtministerium's (the German Air Ministry) "Amerika Bomber" programme, which intended to develop a strategic bomber capable of attacking New York City from bases in France or the Azores. Three prototypes were built, but production was abandoned to allow Messerschmitt to concentrate on fighter production while another design, the Junkers Ju 390, had been selected in its place as a maritime reconnaissance aircraft.

The origin of the Me 264 design came from Messerschmitt's long-range reconnaissance aircraft project, the P.1061, of the late 1930s. A variant on the P.1061 was the P.1062 of which three prototypes were built, with only two "engines" to the P.1061's four, but they were, in fact, the more powerful Daimler-Benz DB 606s, each comprising a pair of DB 601 inverted V-12 engines, themselves derided by Reichsmarschall Hermann Goering as "welded-together engines" in August 1942. In early 1941, six P.1061 prototypes were ordered from Messerschmitt, under the designation Me 264. This was later reduced to three prototypes.

The progress of these projects was initially slow, but after Germany had declared war on the United States, the Reichsluftfahrtministerium (RLM) started a more serious programme for a very long range bomber, with the result that a larger, six-engine aircraft with a greater bomb load was called for. To meet this demand, proposals were put forward for the Junkers Ju 390, Focke-Wulf Ta 400 and a six-engine Messerschmitt Me 264B. As the Junkers Ju 390 could use components already in use for the Ju 290 this design was chosen. The Me 264 was not abandoned however as the Kriegsmarine (German Navy) separately demanded a long-range maritime patrol and attack aircraft to replace the converted Fw 200 Condor in this role.[2] As a result, the two pending prototypes were ordered to be completed as development prototypes for the Me 264A ultra long-range reconnaissance aircraft. [3]

The Me 264 was an all-metal, high-wing, four-engine heavy bomber of classic construction. The fuselage was round in cross-section and had a cabin in a glazed nose, comprising a "stepless cockpit" with no separate windscreen section for the pilots, which was common for most later German bomber designs. A strikingly similar design was used for the B-29, of slightly earlier origin. The wing had a slightly swept leading edge and a straight trailing edge. The empennage had double tail fins. The undercarriage was a retractable tricycle gear with large-diameter wheels on the wing-mounted main gear.

The planned armament consisted of guns in remotely-operated turrets and in positions on the sides of the fuselage. Overall, it carried very little armour and few guns as a means of increasing fuel capacity and range. The Me 264 had four 1,700 PS (1,250 kW) BMW 801G engines. In order to provide comfort on the proposed long-range missions, the Me 264 featured bunk beds and a small galley complete with hot plates.

The first prototype, the Me 264 V1, was flown on 23 December 1942. It was powered at first by four Jumo 211J inline engines of 990 kW (1,340 hp) each. In late 1943, these were changed to the BMW 801G radials which delivered 1,290 kW (1,750 hp). Trials showed numerous minor faults, and handling was found to be difficult. One of the drawbacks was the very high wing loading of the Me 264 in fully loaded conditions: 356kg/m²; comparable aircraft, such as the B-29 Superfortress at 337 kg/m² wing loading, and Ju 390 at 209 kg/m², had less. The high wing loading led to performance problems across the whole flight envelope, in particular bad climb performance, loss of maneuverability and in-flight stability, and the need for high take-off and landing speeds. This first prototype was not fitted with weapons or armour, but of the following two prototypes, the Me 264 V2 had armour for the engines, crew and gun positions, although it was decided to complete the Me 264 V2 without defensive armament and vital equipment and the Me 264 V3 was to be armed and have the same mentioned armoured parts.

In 1943, the Kriegsmarine withdrew their interest in the Me 264 in favour of the existing Ju 290 and the planned Ju 390, with the Luftwaffe preferring the unbuilt Ta 400 and the Heinkel He 277 as Amerika-Bomber candidates in May 1943, based on their own performance estimates.[4] As a consequence, in October 1943, Erhard Milch ordered the cancellation of further Me 264 development to concentrate on the development and production of the Me 262 jet fighter-bomber. Late in 1943, the second prototype, Me 264 V2, was destroyed in a bombing attack.[3][5] On 18 July 1944, the first prototype, which had entered service with Transportstaffel 5, was damaged during an Allied bombing raid and was not repaired. The third prototype, which had not been fully completed, was destroyed during the same raid. 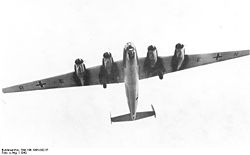