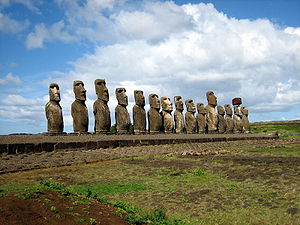 i/ˈmoʊ.aɪ/, or mo‘ai, are monolithic human figures carved from rock on the Chilean Polynesian island of Easter Island between the years 1250 and 1500.[1] Nearly half are still at Rano Raraku, the main moai quarry, but hundreds were transported from there and set on stone platforms called ahu around the island's perimeter. Almost all moai have overly large heads three-fifths the size of their bodies. The moai are chiefly the living faces (aringa ora) of deified ancestors (aringa ora ata tepuna).[2] The statues still gazed inland across their clan lands when Europeans first visited the island, but most would be cast down during later conflicts between clans.

The 887 statues'[3] production and transportation is considered a remarkable creative and physical feat.[4] The tallest moai erected, called Paro, was almost 10 metres (33 ft) high and weighed 82 tons;[5] the heaviest erected was a shorter but squatter moai at Ahu Tongariki, weighing 86 tons; and one unfinished sculpture, if completed, would have been approximately 21 metres (69 ft) tall with a weight of about 270 tons.

Six of the fifteen moai at Ahu Tongariki 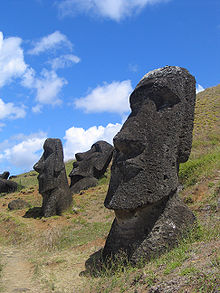 Moai set in the hillside at Rano Raraku

The moai are monolithic statues, their minimalist style related to forms found throughout Polynesia. Moai are carved in relatively flat planes, the faces bearing proud but enigmatic expressions. The over-large heads (a three-to-five ratio between the head and the body, a sculptural trait that demonstrates the Polynesian belief in the sanctity of the chiefly head) have heavy brows and elongated noses with a distinctive fish-hook-shaped curl of the nostrils. The lips protrude in a thin pout. Like the nose, the ears are elongated and oblong in form. The jaw lines stand out against the truncated neck. The torsos are heavy, and, sometimes, the clavicles are subtly outlined in stone. The arms are carved in bas relief and rest against the body in various positions, hands and long slender fingers resting along the crests of the hips, meeting at the hami (loincloth), with the thumbs sometimes pointing towards the navel. Generally, the anatomical features of the backs are not detailed, but sometimes bear a ring and girdle motif on the buttocks and lower back. Except for one kneeling moai, the statues do not have legs.

Though moai are whole-body statues, they are commonly referred to as "Easter Island heads". This is partly because of the disproportionate size of most moai heads and partly because, from the invention of photography until the 1950s, the only moai standing on the island were the statues on the slopes of Rano Raraku, many of which are buried to their shoulders. Some of the "heads" at Rano Raraku have been excavated and their bodies seen, and observed to have markings that had been protected from erosion by their burial.

All but 53 of the 887 moai known to date were carved from tuff (a compressed volcanic ash). At the end of carving, the builders would rub the statue with pumice from Rano Raraku, where 394 moai and incomplete moai are still visible today (there are also 13 moai carved from basalt, 22 from trachyte and 17 from fragile red scoria).[6] 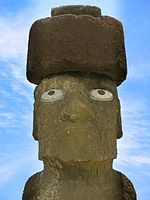 Easter Island statues are known for their large, broad noses and strong chins, along with rectangle-shaped ears and deep eye slits.

In 1979, Sergio Rapu Haoa and a team of archaeologists discovered that the hemispherical or deep elliptical eye sockets were designed to hold coral eyes with either black obsidian or red scoria pupils. The discovery was made by collecting and reassembling broken fragments of white coral that were found at the various sites. Subsequently, previously uncategorized finds in the Easter Island museum were re-examined and recategorized as eye fragments. It is thought that the moai with carved eye sockets were probably allocated to the ahu and ceremonial sites, suggesting that a selective Rapa Nui hierarchy was attributed to the moai design until its demise with the advent of the Birdman religion, Tangata Manu.

Some moai had pukao on their heads; these were carved out of red scoria, a very light rock from a quarry at Puna Pau. 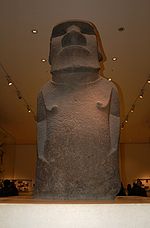 Hoa Hakananai'a in the British Museum

When first carved, the surface of the moai was polished smooth by rubbing with pumice. Unfortunately, the easily worked tuff from which most moai were carved is also easily eroded, and, today, the best place to see the surface detail is on the few moai carved from basalt or in photographs and other archaeological records of moai surfaces protected by burial.

Those moai that are less eroded typically have designs carved on their backs and posteriors. The Routledge expedition of 1914 established a cultural link[7] between these designs and the island's traditional tattooing, which had been repressed by missionaries a half-century earlier. Until modern DNA analysis of the islanders and their ancestors, this was key scientific evidence that the moai had been carved by the Rapa Nui and not by a separate group from South America.

At least some of the moai were painted; Hoa Hakananai'a was decorated with maroon and white paint until 1868, when it was removed from the island. It is now housed in the British Museum, London. 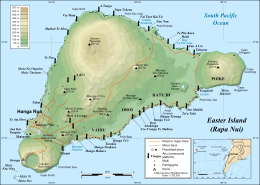 The statues were carved by the Polynesian colonizers of the island, mostly between circa 1250 CE and 1500 CE.[1] In addition to representing deceased ancestors, the moai, once they were erected on ahu, may also have been regarded as the embodiment of powerful living or former chiefs and important lineage status symbols.

Completed statues were moved to ahu mostly on the coast, then erected, sometimes with red stone cylinders (pukao) on their heads. Moai must have been extremely expensive to craft and transport; not only would the actual carving of each statue require effort and resources, but the finished product was then hauled to its final location and erected.

The quarries in Rano Raraku appear to have been abandoned abruptly, with a litter of stone tools, many completed moai outside the quarry awaiting transport and almost as many incomplete statues still in situ as were installed on ahu. In the nineteenth century, this led to conjecture that the island was the remnant of a sunken continent and that most completed moai were under the sea. That idea has long been debunked, and now it is understood that:

The moai were either carved by a distinguished class of professional carvers who were comparable in status to high-ranking members of other Polynesian craft guilds, or, alternatively, by members of each clan. The oral histories show that the Rano Raraku quarry was subdivided into different territories for each clan.

Since the island was treeless by the time the Europeans first visited, the movement of the statues was a mystery for a long time; pollen analysis has now established that the island was almost totally forested until 1200 CE. The tree pollen disappeared from the record by 1650, and the statues stopped being made around that time.

It is not known exactly how the moai were moved across the island, but the process almost certainly required human energy, ropes, and possibly wooden sledges (sleds) and/or rollers, as well as leveled tracks across the island (the Easter Island roads).

Oral histories recount how various people used divine power to command the statues to walk. The earliest accounts say a king named Tuu Ku Ihu moved them with the help of the god Makemake, while later stories tell of a woman who lived alone on the mountain ordering them about at her will. Scholars currently support the theory that the main method was that the moai were "walked" upright (some assume by a rocking process), as laying it prone on a sledge (the method used by the Easter Islanders to move stone in the 1860s) would have required an estimated 1500 people to move the largest moai that had been successfully erected. In 1998, Jo Anne Van Tilburg suggested fewer than half that number could do it by placing the sledge on lubricated rollers. In 1999, she supervised an experiment to move a nine-ton moai. They attempted to load a replica on a sledge built in the shape of an A frame that was placed on rollers. A total of 60 people pulled on several ropes in two attempts to tow the moai. The first attempt failed when the rollers jammed up. The second attempt succeeded when they embedded tracks in the ground. This was on flat ground; further experiments may be necessary to determine whether this will work on rougher terrain.[10] 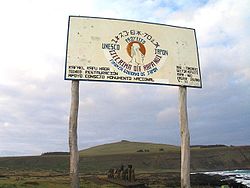 In 1986, Pavel Pavel, Thor Heyerdahl and the Kon Tiki Museum experimented with a five-ton moai and a nine-ton moai. With a rope around the head of the statue and another around the base, using eight workers for the smaller statue and 16 for the larger, they "walked" the moai forward by swiveling and rocking it from side to side; however, the experiment was ended early due to damage to the statue bases from chipping. Despite the early end to the experiment, Thor Heyerdahl estimated that this method for a 20-ton statue over Easter Island terrain would allow 320 feet (100 m) per day. Other scholars concluded that it was probably not the way the moai were moved.[10][11]

Around the same time, archaeologist Charles Love experimented with a 10-ton replica. His first experiment found rocking the statue to walk it was too unstable over more than a few hundred yards. He then found that placing the statue upright on two sled runners atop log rollers, 25 men were able to move the statue 150 feet (46 m) in two minutes. In 2003, further research indicated this method could explain the regularly spaced post holes where the statues were moved over rough ground. He suggested the holes contained upright posts on either side of the path so that as the statue passed between them, they were used as cantilevers for poles to help push the statue up a slope without the requirement of extra people pulling on the ropes and similarly to slow it on the downward slope. The poles could also act as a brake when needed.[12]

After the 1722 Roggeveen visit, all of the moai that had been erected on ahus were toppled, with the last standing statues reported in 1838 by Abel Aubert Dupetit Thouars, and no upright statues by 1868,[13] apart from the partially buried ones on the outer slopes of Rano Raraku. Oral histories indicate that this was part of a deadly conflict among the islanders, rather than an earthquake or other cause. Most of the moai were toppled forward to where their faces were hidden and often were toppled in such a way that their necks broke. Today, about 50 moai have been re-erected on their ahus or museums elsewhere.[clarification needed][citation needed]

Eleven or more moai have been removed from the island and transported to locations around the world, including six out of the thirteen moai that were carved from basalt. 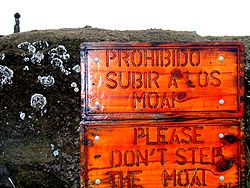 It is forbidden for visitors to climb on the moai.

The Rapa Nui National Park and the moai are included on the 1994 list of UNESCO World Heritage sites and consequently the 1972 UN convention concerning the protection of the world's cultural and natural heritage.

The EISP (Easter Island Statue Project) is the latest research and documentation project of the moai on Rapa Nui and the artifacts held in museums overseas. The purpose of the project is to understand the figures' original use, context, and meaning, with the results being provided to the Rapa Nui families and the island's public agencies that are responsible for conservation and preservation of the moai.