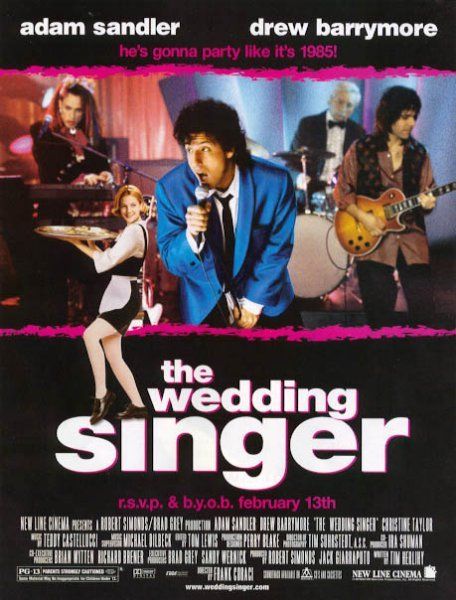 "The Wedding Singer" is a written by and directed by that stars as Robbie Hart, a , and as Julia Sullivan, the object of his affections.

"The Wedding Singer" was later adapted into a stage musical with the same title, debuting on Broadway in early and closing on New Year's Eve.

In 1985, Robbie Heart (Adam Sandler) is a wedding singer from the town of . Engaged to his long-time girlfriend, Linda (), he meets and befriends a waitress, Julia Sullivan (), at the reception hall where he is performing one night. Julia is also engaged, to fiancé Glenn Gulia ().

On his wedding day, Robbie is devastated when he is left standing at the altar and tries to soldier on, but his despair hinders his performances. Julia tries to cheer him up, and later asks him to help her plan her wedding. Initially reluctant, Robbie eventually agrees, and their friendship blossoms as they spend more time together and become closer.

Julia's cousin, Holly (), asks to be set up on a double date with Robbie and Glenn. Julia becomes jealous when Holly throws herself at Robbie. Julia drinks to excess and when Holly takes her to the bathroom, Glenn openly admits to Robbie that he is a who has been cheating on Julia for some time and doesn't intend to stop doing so after marrying her. After Robbie rebuffs her advances, Holly figures out that he loves Julia.

Julia and Robbie are increasingly confused by their deepening feelings for each other. Robbie decides to try to get a real job to make real money and impress Julia, but his attempts fail as not only is he unable to do so, but Julia becomes angry at him for assuming she's marrying Glenn for his money. Robbie goes to a bar to start drinking, where his best friend Sammy (), a limo driver and wannabe womanizer, meets him. Robbie tells him that he's in love with Julia and that Glenn cheats on her, but he doesn't want to break up her wedding. He decides that he wants be like Sammy and start sleeping with various girls for the rest of his life so he can be happy, but Sammy tells Robbie that he is miserable and that all he really wants is someone to comfort him.

Robbie finally decides to confess his feelings, and heads to Julia's house. Robbie sees Julia happily admiring her reflection in the mirror and mistakenly believes that she is looking forward to marrying Glenn, when in fact she is pretending that she is married to Robbie. Heartbroken, he gets drunk and finds Glenn in the middle of his bachelor party. Robbie calls him out for cheating on Julia, and Glenn punches him in the face and insults him. Robbie walks home and waiting for him is Linda, who says that she wants to get back together. In the morning, Julia goes to tell Robbie how she feels about him, but she is astonished when Linda answers the door. Linda introduces herself as Robbie's fiancée to a disheartened Julia, who leaves sadly. She runs to Glenn and tells him she wants to get married right away, and he happily offers to take her to .

Robbie is inspired by a 50th wedding anniversary celebration to chase after Julia. Holly tells him where Julia has gone, so he, Sammy, and Holly rush to the airport, where Robbie buys a ticket on the next plane to Las Vegas, forced to fly , because the coach tickets are sold out.

On board the flight, obvious signs of Glenn and Julia's incompatibility begin to manifest themselves. Meanwhile, Robbie tells his story to his fellow first class passengers, including (playing himself), who are sympathetic to him. When Robbie overhears a flight attendant () complaining about a rude man in coach, he believes it might be Glenn from exact comments he made earlier, so he peeks into the coach section and finds Julia and Glenn there. With the help of Billy Idol and the flight crew, Robbie sings over the loudspeaker a song he has just written especially for Julia, called "Grow Old With You", based on Julia's comment that she always imagined the "right guy" as being someone she could see herself growing old with. He emerges from first class to sing to an ecstatic Julia. Glenn tries to stop him, but is stopped by the flight crew, Idol and a large fan of his.

The movie closes as Julia and Robbie get married, as the band, with (uncredited, who also played a drunken earlier in the film) on guitar and vocals, plays the song "True".