The University of Ulster (formerly shortened to UU; Irish: Ollscoil Uladh[3][4][5], Ulster Scots: Universitie o Ulstèr[6] or Varsitie o Ulster)[7] is a multi-campus, co-educational university located in Northern Ireland. It is the largest single university in Ireland, discounting the federal National University of Ireland. UU was established in 1968 as the New University of Ulster and can trace its roots back to 1845 when Magee College was established in Derry and 1849, when the School of Art and Design was inaugurated in Belfast. The university incorporated its four campuses in 1984 under the UU banner; these are located in Belfast, Coleraine (site of the administrative headquarters), Magee College in Derry, and Jordanstown. A fifth distance learning campus, Campus One, delivers online programmes; mainly at graduate level.

The university has one of the highest further study and/or employment rates in the UK, with 95% of graduates being in work or undertaking further study six months after they have completed their degree.[10] In the field of biomedical sciences, UU obtained a 5* rating, as well as being ranked joint first in the UK, following the Research Assessment Exercise in 2001. In the 2008 RAE 86% of research activity at the university was rated as being of international quality, with 20% being classified as world-leading. Of particular note are the submissions within Biomedical Sciences, the University of Ulster Institute of Nursing Research[11] and Celtic Studies which were all ranked within the top three UK universities[10]

The New University of Ulster incorporates Magee College founded in 1865 in Derry. Magee College was a college of the Royal University of Ireland from 1880 and later became associated with the University of Dublin (better known as Trinity College) when the Royal University was dissolved in 1908 and replaced by the National University of Ireland. In 1953 Magee College broke its links with Dublin and became Magee University College. It was hoped that this university college would become Northern Ireland's second university after The Queen's University of Belfast. However, this did not happen and instead it was subsumed into the New University, primarily as a result of the unwillingness of the Unionist government at Stormont to have the second university sited in overwhelmingly nationalist Derry, in which "The Troubles" were just beginning to break out. The decision caused an outcry at the time[citation needed]. The university was built at Coleraine as part of the UK government's expansion of higher education in the 1960s. Coleraine today is the university's headquarters and main campus. The University incorporated the campus site of the former Ulster Polytechnic in 1984. This was the first, and as of 2010, only merger in UK higher education whereby what is now called a plate glass university merged with what would now be a post-1992 university.

Jordanstown campus was once known as Ulster Polytechnic

The University's course provision is the largest in Northern Ireland, covering arts, business, engineering, information technology, life and health sciences, management, and social sciences. Courses have a strong vocational element and the majority include a period of industrial or professional placement.

The University of Ulster has a strong reputation for innovation. In order to create new pathways into higher education the University of Ulster initiated its Online Distance Learning (ODL) project called Campus One. The Campus One programme provides an alternative mode of study, with a range of courses available online to students all over the world. Campus One courses range from full postgraduate programmes, professional development and continuing development courses; through to short business-focused courses all offered over the Internet.

The University contributes a higher than national average to local research and development activity and has a strategic research focus.

The University of Ulster is particularly strong in the field of biomedical sciences, and a Centre for Molecular Biosciences (located at Coleraine) is one of the major projects developed by the University. The Biomedical Sciences department obtained 5* ratings as well as being joint first in the UK, following the UK – wide Research Assessment Exercise (RAE) in 2001. It was the only UK university to retain a 5* rating for biomedical sciences in the 2001 RAE - part of a performance that saw significant improvement and consolidation of the 1996 results. A 5* research rating was also awarded in the field of Celtic studies. The University performed strongly in the 2008 RAE. Full details of Ulster's RAE results are available at http://research.ulster.ac.uk/rae/rae2008.html

The faculties of the University (and the dean of each faculty listed after), are:

The University of Ulster currently maintains 5 sites across Northern Ireland, as well as one "Online" site. In February 2009 the university announced the movement of many courses from the Jordanstown campus to the main Belfast campus and a consolidation of student numbers at Coleraine and the reuse of university grounds for a business park.[12] 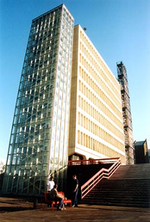 Coleraine was the primary campus of the New University of Ulster

The Coleraine campus (UUC) is the administration headquarters of the University and is the most traditional in outlook, with a focus on science and the humanities. The traditional focus is primarily as a result of it always being a university campus as opposed to the more vocational type courses offered at the polytechnic at Jordanstown. The Coleraine campus includes the only optometry school in Northern Ireland and is indeed one of only two on the island of Ireland. 2009 will see the University launch a new Master of Pharmacy (MPharm) course at Coleraine. The campus includes the Riverside Theatre, the third-largest professional theatre in Northern Ireland. The Coleraine campus is situated on the banks of the River Bann with views to the North Coast and County Donegal hills.

The Portrush site was part of the Coleraine Campus and home to the School of Hotel, Leisure and Tourism. Portrush is a town east of Coleraine on the North Coast of Northern Ireland.

The Portrush Campus closed in 2008 and courses were relocated to the Coleraine and the newly developed Belfast campuses.

The UUJ Gaelic football team (blue) in action against Fermanagh (green) in the 2009 Dr. McKenna Cup

The Jordanstown campus (UUJ) is located in Jordanstown, 7 miles outside Belfast and concentrates on engineering, health and social science, and is the home of the highly successful Ulster Business School. The 114-acre (0.46 km2) Jordanstown campus is set in a leafy suburb approximately seven miles (11 km) from Belfast city centre and situated at the foot of the Antrim Hills overlooking Belfast Lough. UUJ is home to the Sports Institute for Northern Ireland and has a range of Sports facilities including a new high performance centre. The Buildings are mostly situated around a central Mall with on-site stores and services. A number of high-demand undergraduate courses at UUJ have extremely high entry requirements such as Physiotherapy, Diagnostic and Therapeutic Radiography, Speech and Language Therapy, Occupational Therapy, Clinical Physiology, Communication Advertising and Marketing (CAM), Law, Sport and Exercise Science/Sports Studies. 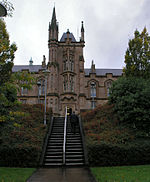 The main building of the Magee campus opened in 1865

The Magee campus (UUM) in Londonderry is a mixture of historic and new buildings in a Victorian residential area of the city. It was named after Martha Magee and opened in 1865 as a Presbyterian Christian arts and theological college.[13] Today, it has no religious affiliation and provides a broad range of undergraduate and postgraduate degree programmes in disciplines ranging from computer science, computer games and robotics to psychology and nursing, as well as research excellence[14] with the Intelligent Systems Research Centre located there. The campus is within walking distance to the shopping and entertainment districts and is serviced by transport links. Since 1984, development of the university has focused on the expansion of the Magee campus.[13] 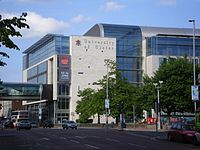 The Belfast campus (UUB) is the University’s home of the School of Art and Design, and completed major redevelopment in 2008. The Building is situated in the Cathedral Quarter of the City. This is becoming a fashionable area of the city which has been developing rapidly in recent years. There are many social and cultural activities in Belfast, the capital of Northern Ireland. Southern Belfast, where most student accommodations are found, has many restaurants, pubs, theatres and shops. Students at the Belfast campus can use the fine recreation facilities at the larger Jordanstown campus. Transportation between the two sites is quick and frequent. Total enrolment: 1,100 students.

The Freshwater Laboratory, although not a campus was a base of the University and consisted of on-campus accommodation, classrooms and testing labs. Courses offererd were all based on studying agriculture, wildlife in Lough Neagh, water testing and other aquactic courses.

The base closed around ten years ago, and still remains standing, the buildings and on-site accommodation is in a run down state and was recently bought by Magherafelt District Council.

The remaining site is located on the edge of Lough Neagh, down the Point Road in Ballymaguigan. The area today has become popular with the locals for camping, fishing and boating.

Campus One, the Virtual Campus of the University of Ulster, was launched on 8 October 2001.[16] It represents a revolutionary new route to learning via the World Wide Web and was selected by the European Commission to deliver World's First Higher Educational Programme in Hydrogen Safety Engineering. Campus One, a 'University at Your Fingertips', provides an online portal through which all of the University of Ulster's e-learning courses are made available on a global scale. The virtual campus incorporates existing e-learning courses with new post and undergraduate programmes, all of which can be accessed and completed via Campus One from anywhere in the world. Campus One is the first e-learning network of its kind in the UK and Ireland, and has been developed in association with academic partners in the USA and Hong Kong, ensuring its e-learning programmes to have global reach and relevance.

Main article: List of alumni of the University of Ulster