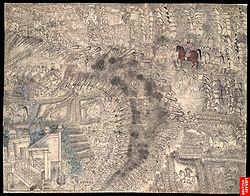 Najib-ud-daula, also known as Najib Khan, was a noted Rohilla tribal chief in 18th century Rohilkhand, who in the 1740s founded the city of Najibabad in Bijnor district, India, and succeeded Safdar Jang as Nawab Wazir of the Mughal Empire. Later in his career he was known as Najib-ud-daula, Amir-ul-umra, Shuja-ud-daula.[1]From 1757 to 1770 he was governor of Saharanpur, ruling over Dehradun. Many architectural relics of the period of Rohilla he oversaw remain in Najibabad, which he founded at the height of his career as a Mughal minister.[2]

Najib Khan belonged to the umarkhel section of Mandanhs. He migrated from Swabi, Afghanistan now in Pakistan in the northwest to Rohilkhand in 1739 to join his uncle Bisharat Khan, who had settled with his band of Pathans at Bisharatnagar, near Rampur [3]. In 1749, Ali Mohammed, who had captured most of Rohilkhand by 1740, gave Najib Khan a northern portion [4], where he established the present day city of Najibabad, a state of Najibabad independent from other Rohilla tribes, and received the title, ‘Najib-ud-daula’. 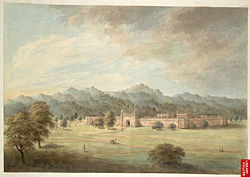 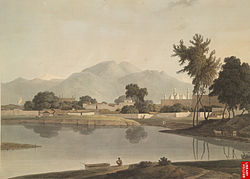 Najibabad, ca 1784-94, the triple domed Jami Mosque and the entrance gate to the Rohilla palace

In 1757, Najib-ul-Daula, who was then the governor of Saharanpur under Mughal Empire, invaded the city of Dehradun, with his army of Rohillas, and ruled the area for the next decade. His rule was known for its administration, and development of land resources, leading to wide spread development and prosperity in the area, with emphasis on agriculture and irrigation. Many mango groves created during the area still exist today. Though after his death in 1770, the area again fell into the hands of warring sides of Raj puts, Gujjars, Sikhs and Gurkhas, who successively ruled the region, leading to its downfall [5]

In the Third battle of Panipat, during the Imperial Maratha Conquests, he allied himself with the Durranis led by Ahmad Shah Durrani (also known as Ahmad Shah Abdali [6], against the Marathas. Najib Khan was shrewd enough to understand changed ground realities after third battle of Panipat . His cunning political acumen was used by Ahmed Shah Abdali to isolate Marathas & preventing them from getting even single ally during their conflict with Durrani power. His opposition to signing of treaty, with Marathas was the main cause of battle being fought at Panipat. He not only provided, Ahmed Shah Abdali, with 40,000 Rohilla troops but also 70 guns to the combined forces. He also convinced Shuja-ul-Daula, the Nawab of Oudh, to join Ahmad Shah Abdali's forces against the Marathas. In this battle, the Maratha's were defeated and as a consequence Rohilla increased in power.

After the war he was made vizier of Mughal emperor.[clarification needed]. He had to become vizier of Delhi state with empty treasury & territory confining to boundaries of Delhi city .He negotiated bought peace with Marathas in 1768 by surrendering Doab.

Najib Khan was an Afghan soldier of fortune; he attained the hand of the daughter of Dunde Khan, one of the chieftains of the Rohilkhand Pathans. Rewarded by this ruler with the charge of a district, now Bijnor, in the North-west corner of Rohilkhand, he had joined the cause of Safdarjung, when that minister occupied the country; but on the latter's disgrace had borne a part in the campaigns of Ghazi-ud-din. When the Vizier first conceived the project of attacking the government, he sent Najib in the command of a Mughal detachment to occupy the country, about Saharanpur, then known as the Bawani Mahal, which had formed the jagir of the Ex-Vazir Khan Khanan.

This territory thus became in its turn separated from the Empire, and continued for two generations in the family of Najib. He ruled the dwindled Empire for nine years, and died a peaceful death, leaving his charge in an improved and strengthened condition, ready for its lawful monarch. He was highly esteemed by the British in India.

Rohilkhand was invaded by the Marathas to retaliate against the Rohilla participation in the Panipat War. Eventually, he made a pact with the Marathas, who rose to power in 1769-70, in 1770, he advanced with Maratha army under, Scindias and Holkars, and went on to defeat Rahmat Khan, the Nawab of Rohilkhand, who has earlier made himself, the head of Etawah, after the Third Battle of Panipat 1761. [7], but he soon fell ill and died on October 30, 1770[8]/ 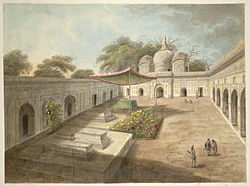 The Jami Mosque, at Najibabad, with graves of Nawabs of Najibabad and their family, ca. 1814-15 painting.

After his death he was succeeded by his son Zabita Khan. His cemetery is still in present day, Najibabad, where the Patthargarh Fort still exists.

A few years later, in the subsequent Rohilla War, the Rohillas were attacked by Awadh with help from British East India Company forces. When Hafiz Rahmat Khan was killed, in April 1774, they were defeated, and Rohilkhand was plundered; and later, the Rohilla power east of the Ganges was crushed, and the final treaty by which the territory was incorporated in Awadh was concluded at Lal Dhang. The District was ceded to the British by the Nawab of Awadh, Saadat Ali Khan II in 1801 [4].