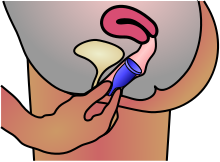 Insertion of a menstrual cup in the vagina

There are two types of menstrual cup currently available:

The first type is a bell-shaped cup made of rubber (latex), silicone or thermoplastic elastomer (TPE). It is reusable and designed to last for up to 10 years. Some brands recommend replacement each year, as it is a hygiene product. Other brands recommend replacement after 5–10 years, stating that people have been comfortable using them up to 10 years. These bell-shaped silicone or rubber cups must be removed before penetrative vaginal sex.[2]

The second type, Instead Softcup, also known as "Softcup", is a soft, flexible, menstrual cup made of polyethylene and resembles the contraceptive diaphragm. There are two types of Softcup: a disposable version designed for disposal after one use, and a reusable version, designed for re-use for one menstrual cycle. Softcups may be worn during intercourse for mess-free sex, though they are not contraceptive devices.[2]

Menstrual cups are safe when used as directed and no health risks related to their use have been found.[3][4] One case report in the journal Gynecologic and obstetric investigation noted that menstrual cups could theoretically increase the likelihood of endometriosis and adenomyosis and described one woman who developed the disorders after use of a menstrual cup.[5] However, the U.S. Food and Drug Administration declined to remove menstrual cups from the market, saying that there was insufficient evidence that the risk was more than merely theoretical.[6] The University of British Columbia is currently conducting a clinical study comparing the safety and user satisfaction rates for tampons and menstrual cups.[7] The Journal of Women's Health has published a clinical study demonstrating the acceptability and safety of the Instead Softcup in both clinical and pre-clinical testing.[8] There have been no reported cases of toxic shock syndrome occurring with the use of menstrual cups.

Small size (left) and large size (right). The stem may be trimmed

Most brands have a smaller and a larger size. The smaller size is normally recommended for persons under 25 or 30 who have not given birth vaginally. The larger size is normally recommended for persons over 25 or 30, or who have given birth vaginally. The menstrual cups with the smallest size diameter are recommended for teenagers. As well as width, length also needs to be considered. If a person's cervix sits particularly low, they may need to consider a shorter length cup. Shape is also important, as people vary in shape preferences for comfort. Capacity is important to people who have heavier flows; however, all of the menstrual cups currently available have higher capacity than a regular tampon.[9]

Like umbilical cord blood, menstrual blood is known to be a good source of stem cells. Hygina [2] and Madmoicell [3][4] have developed cups for the express purpose of collecting menstrual fluid for stem cell research. 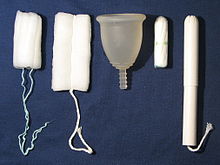 Menstrual cups are more cost-efficient and environmentally friendly than tampons, as they are reusable (with the exception of the Softcup). They also carry less risk of Toxic Shock Syndrome (see section on Rely tampons), as the illness most often results from bacteria entering the bloodstream through tearing of vaginal tissue.[citation needed] This results from the drying caused by tampons or other absorption products. Some people opt for a menstrual cup because it does not absorb natural vaginal secretions as a tampon or sponge would.[16]

The cup offers a discrete nature that pads and tampons cannot provide. Rather than carrying these items for the purpose of changing every few hours, one need only wear the one cup and empty it in the comfort of one's home at the end of the day.

Predicting the beginning of one's menstrual cycle can be a little tricky, so many people apply a pad or insert a tampon at the beginning of the day it is supposed to start. If one's cycle has not begun, one will still want to dispose of the pad at the end of the day, or check the tampon within the recommended eight-hour time-period. Both need to be disposed of, but the cup only needs to be cleaned and reinserted. No products are wasted.

In addition, most disposable tampons are made of artificial fibers that break away and are left inside the vagina, which does not occur with use of a menstrual cup.[citation needed] 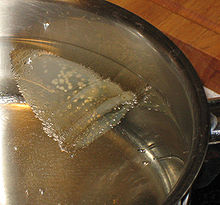 Using menstrual cups can be more time-consuming for those just starting to use them. For some people, menstrual cups are more difficult to insert and remove than tampons [17] and may also be a bit messier.[17] It often takes a few cycles to learn how to efficiently insert and remove the cup, as they create a seal in the vaginal canal. If lubrication is necessary for insertion, make sure it is water-based, as some lubricant ingredients can be damaging to the silicone. [5] Another potential time-consumer is cleansing. The manufacturers recommend washing the cup every 12 hours with a mild, unscented cleanser. [6]

Cup manufacturers urge the use of clean water for cleansing. This may not feasible in all countries or conditions, and alternative ways of managing menstrual flow will need to be employed.