Gustavo Adrián Cerati Clark (born August 11, 1959) is an Argentine rock musician, singer-songwriter, composer and record producer. He was the frontman, lead vocalist, lead guitarist and lead songwriter of the Argentine rock band Soda Stereo, one of the most influential bands of latin rock music. In the early 90s, with Amor Amarillo, he pursued a solo career. His work both as a solo artist and with Soda Stereo positioned him as one of the most influential rock musicians of Latin America.[1][2] He is currently in a coma after suffering a stroke on May 15, 2010.[3]

He was born on August 11, 1959 in Buenos Aires, capital of Argentina. He was involved musically since childhood. His first musical foray was in a group of broomsticks formed in grammar school. As a student he was seen intermittently, every year wearing a newsletter with 24 or 25 warnings. Besides music, he had other hobbies: drawing, creating comic book characters such as "super-brain" (like Superman, but with the peculiarity that the kryptonite was not anything, just the mediums came to disturb him, unable to feel).

Business for sports (I practiced swimming and athletics) won second place in a contest of the magazine Billiken, after running the 100 meters in intercollegiate competition. One of the key activities performed during those early years was to lead the school choir Instituto San Roque, where he later had to comply with a suspension burp during a celebration of Mass (He could return to office after winning a prize singing at the Coliseum, and donate to the institution.)

As a teenager worked as a sales representative for Laboratory Boehringer Argentina, in mid-1981. Then years later he led the Argentine military.

His early musical influences were bands like The Police (who offers a tribute to the song Bring On The Night, where he sings and plays bass, with Andy Summers on guitar and Vinnie Colaiuta on drums), Queen (recorded a cover of Some Day One Day with Soda Stereo) and The Cure. Also David Bowie, Brian May of Queen and Ritchie Blackmore of Deep Purple.

In high school he formed the groups with which he won a Christmas song competition on Channel 9. He then formed two bands simultaneously, "Savage", rock and blues, and "strong voice" of fusion music. Savage was also formed by two singers English and used a cabaret act in front of Centennial Park. He also formed a trio called "Trike" 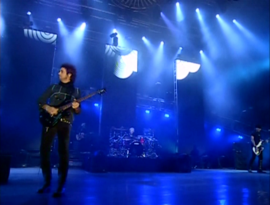 In 1982 he established a close relationship Cerati music and friendship with Héctor "Zeta" Bosio, which was to prove decisive in the future of both. They knew before they were partners in the career of advertising at the University of Salvador, [2] but only deepened their friendship deep relationship in the summer of 1982 in Punta del Este, where they decided to return to Buenos Aires and form Soda Stereo. Zeta and Gustavo shared the same tastes and musical dreams and began a search for integrating a punk rock group inspired by The Police (which was introduced in Argentina that year), with their own songs in Spanish. In that search, pre-integrated Soda Morgan band together, then the Stress group (along with Charlie Amato and drummer Pablo Guadalupe) and Erekto Project (with Andres Calamaro) [7].

Finally, the two musicians began to plan the formation of a band that would play songs. At that time know Charly Alberti who formed the trio The Stereotypes. [8] After a brief period in which various configurations tested, including at times musicians like Daniel Melero Richard Coleman and others, ended up preferring the form of trio and changed the name Soda Stereo.

From the beginning the group took to build his own image, aided by Alfredo Lois (college roommate) took care of the aesthetic details, makeup, hairstyles, and later, the top of the first albums and staging recitals. [8] The first concerts were in July 1983 at the disco Airport and Stud Free Pub Since then toured the circuit of pubs, with an obligatory stop at the Cafe Einstein and Zero, which by then represented the center of the scene less commercial of the moment, where bands played as High and Virus. 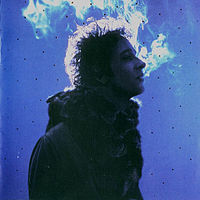 Bocanada's cover album. "Bocanada" (1999) was the first solo album that Cerati made after the Soda Stereo separation. It showed a new sound, but received very good reviews from experts and fans.

Cerati recorded two solo albums while playing with Soda Stereo. These albums are:

Cerati's solo albums since the breakup of Soda Stereo are:

Cerati is known for his lead and rhythm guitar talents and for his ability to play intricate lead solos on guitar while singing in key. In his album Ahí vamos his guitar playing is featured prominently as opposed to the heavy use of electronic samplers as in Bocanada. Ahí Vamos was certified platinum in Argentina in only one day.

Cerati has several electronic music alter egos as well, namely Plan V, Ocio and Roken. He has produced albums for other artists, most notably Sueños en Tránsito for Nicole and Mar for Leo García as well as for the band Friccion. He is a contributing artist on several albums for artists such as Caifanes, Los Calzones, and Shakira.

Despite stating that the Grammys do not matter to him,[4] he attended the Latin Grammys ceremony on November 2, 2006[5][6] where he won for Best Rock Album and Best Rock Song.[7][8]

On March 10, 2007 Cerati played a free concert in Buenos Aires, Argentina. The show was held in a popular square and main streets were closed. The concert was the closure of the Summer Programme of the city government. The government estimated that between 150,000[9] and 200,000[10] people attended.

On July 7, 2007 he performed at Live Earth with Shakira in Germany. 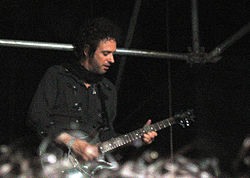 Cerati was married to Chilean model Cecilia Amenábar from 1992 until 2002. They had two children: Lisa and Benito. Amenábar contributed vocals and double bass to Cerati's first solo album, Amor Amarillo.

On May 15, 2010, Cerati suffered a stroke[12] due to a decompensation after his performance in Caracas, Venezuela. He was hospitalized in Centro Médico La Trinidad in Caracas under medical surveillance. Three days later, according to the Venezuelan media,[13] Cerati underwent surgery to relieve pressure on his brain due to the ischemic stroke he suffered.

On June 7, 2010, Cerati was finally transferred to Argentina and hospitalized in the FLENI Neurological Institute in Buenos Aires.[14] Doctors there began treatment with antibiotics due to a respiratory tract infection.[15] The following day, doctors reported extensive brain damage due to the stroke, according to the Agence France-Presse.[16] Cerati currently remains in a coma.

While performing at Rock in Rio Madrid on June 5, 2010, Colombian singer Shakira, a close friend of Cerati, debuted a new song, the title track from her upcoming Spanish album "Sale el Sol" (The Sun Comes Out), dedicated to Gustavo Cerati. The song states that the sun will rise even after the storm and that there is light at the end of the tunnel.[17]

A month after the stroke, Claudio E. Pensa M.D., medical director of the FLENI Neurological Institute, issued a statement to the press stating that Cerati's medical condition remained unchanged and that he would only provide new information if changes were to occur.[18]

Viejas Locas singer Cristian “Pity” Alvarez, during a performance in Cordoba on June 20, 2010, claimed that Cerati was already dead, but his decease was withheld due to financial issues.[19] On June 21, Álvarez and the rest of Viejas Locas issued a statement expressing their wishes for Cerati's full recovery.[20]

On Cerati's official webpage his family issued two statements, with the first on June 20, 2010 thanking and acknowledging the medical staff in Venezuela for their work, as well as the efforts of the personnel of Evenpro and Cerati's roadies and musicians.[21] On June 27, 2010 the family's second statement was released, which affirmed that Cerati is receiving good medical care and asked fans to disregard any malicious rumors related to his health.[22]

On December 2, 2010 a statement was issued by ALCLA Clinic's medical director stating that, neurologically, Cerati is reacting to thermal stimuli.[23]

The Irish rock band U2 remembered Gustavo Cerati in one of their concerts in Ciudad de La Plata, Argentina, on March 2011 during the intro of their song "Moment of Surrender". Bono said "We would like you to think about Gustavo Cerati. We send him our love and respect, and he will hear our voices tonight", earning a standing ovation from 60,000 fans at the Único Stadium.[24] 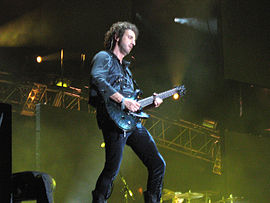 Cerati with his PRS Custom.

Gustavo has an extensive collection of guitars. The guitar he uses most is the PRS Custom Multifoil, which he has used for more than 20 years and is his characteristic guitar, but unlike other musicians that only use one or just a few guitars, he uses several, varying them depending on the song that he's playing in order to achieve the right sound. The guitars he most uses are:

Cerati Gustavo has done a lot of collaborations with other artists, some of the highlights are: