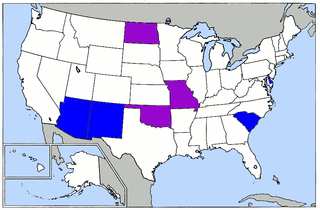 Mini-Tuesday was the name given to the February 3, 2004 U.S. presidential primary where several states, which to that point had participated in "Super Tuesday," cast their votes for the Presidential nominees of the 2004 Presidential election.[1][2] Mini-Tuesday was also called Super Tuesday I (with the March Super Tuesday called Super Tuesday II, in reference to their respective chronological order).[1] With the large number of states moving their election dates up to Mini-Tuesday for the 2008 election cycle, pundits have largely shied away from using the term again, instead choosing to reappropriate the term "Super Tuesday" to better represent the primaries held on that approximate date.[citation needed] The date is also known as "Super Duper Tuesday," "Giga Tuesday," and "Tsunami Tuesday," among others, with the term "Mini Tuesday" falling to apparent disuse for the time being.[3]

Kerry handily won the biggest prize of the day by securing 51% of the vote in Missouri. Edwards placed second with 25%. All other candidates were in the single digits.

In a major victory, Edwards took his birth state of South Carolina, garnering 45% of the vote to Kerry's 30%.

Kerry made a strong showing in Arizona by winning the support of 43% of voters. Clark placed second with 27%. Arizona was the only state primary in which Dean acquired any delegates. His 14% share of the vote netted him just one delegate.

On March 12, 2003 - A state Senate committee in Arizona backed a Republican measure to save $3 million by forgoing that state's primary. District and county conventions will be held in April.

Oklahoma was the most hotly contested state of Mini-Tuesday 2004. Clark needed it to stay in the race, while Edwards wanted it so that he could walk away with two victories. In the end, both candidates got 30% of the vote, with Clark slightly ahead of Edwards. Kerry also placed strongly with 27%.

Lieberman took second place in Delaware with 11% of the vote. However, as this was insufficient to gain him any delegates, he dropped out of the race after a bad showing in the other primaries. Kerry carried the state with 50% of the vote and all thirteen delegates.

Regional meetings in April will choose delegates for a State Convention in mid-May.

In both New Mexico and North Dakota, Kerry placed first by a wide margin and Clark came in second to score a small number of delegates. Additionally, Dean achieved moderate success in New Mexico by netting 18% of the vote and three delegates.