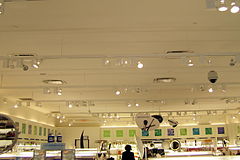 This cosmetics store has lighting levels over twice recommended levels[1]

Over-illumination is the presence of lighting intensity (illuminance) beyond that required for a specified activity. Over-illumination was commonly ignored between 1950 and 1995,[2] especially in office and retail environments; only since then has the interior design community begun to reconsider this practice.

The concept of over-illumination encompasses two separate but related concerns:

Lighting accounts for roughly 9% of U.S. residential electricity use[3] and close to 40% of U.S. commercial building electricity use.[4] Money and energy could be saved by, for example, turning off office building lights overnight, using natural light whenever possible, and taking full advantage of occupancy sensors or simply flipping manual light switches in unoccupied spaces. In response to these concerns, the design and architecture communities are making greater use of indirect sunlight in modern commercial buildings.[citation needed] 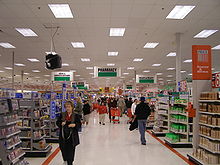 Some big-box retail stores are over-illuminated.

Generally speaking, under-illumination occurs indoors when light levels fall below 320 lux for general office use. Task lighting levels of just 75 lux to 100 lux are not uncommon in contemporary office environments. For comparison, the midday sun provides about 32,000 to 100,000 lux depending on latitude, time of year and cloud cover. The term over-illumination first came into reasonably broad use in the early 1990s, when the lighting, health and energy conservation fields realized its effects. Production of glare is a de facto indication of over-illumination, since that causes optical processing conflicts and confusion to the brain in processing optical inputs.[citation needed] Over-illumination is sometimes grouped with unnatural spectra because negative health effects may result from the excess illumination, and also because certain artificial lights (such as fluorescent lamps) provide intense illumination in certain frequency bands, unlike daylight, whose spectral power distribution is fairly even over the visible spectrum. The most desirable spectrum is that of natural light, which the body is attuned to and uses to set the circadian rhythms.[5]

Furthermore, over-illumination generally does not refer to the extreme conditions of snowblindness or arc eye, in which ultraviolet light can induce physical damage to the cornea.

Lighting unoccupied areas is a significant waste of energy. Many office buildings are illuminated overnight and on weekends. In some cases, this is so that janitors working overnight do not have to bother turning lights on and off. Lighting of unoccupied areas can be reduced by installation of occupancy sensors or timers.

Energy can also be wasted by operating outdoor lighting during daylight. In many cases this arises because the lights are controlled by timers, which must be reset periodically as the times of sunset and sunrise vary throughout the year.

Forsaking use of sunlight 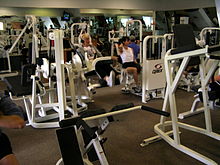 A fitness club that is illuminated mostly by natural light

Forsaking use of sunlight is often a design decision made by the architect or their subcontractor. Overlooking opportunities for skylights can be an issue with many building designs, but lack of coordination of interior light banks with indirect sunlight is even more common. At a minimum, the building design should offer sufficient independent light banks so that building occupants may select the most suitable combination of natural to augmented light. Very frequently entire floors of office buildings are designed with only one switch, so that perimeter areas near natural light are illuminated with the same level of artificial light as the dimmest interior zones. This lack of independent controls also would require an entire office floor of say 10,000 square feet (1,000 m2) to be fully illuminated if one office worker stays late for evening work. This can occur with even the most eminent of architects. Frank Lloyd Wright designed Marin County Civic Center in 1957 with only one or two switches serving very large office pools. This reportedly costs Marin County several thousand dollars per year in electricity costs.

Failure to use occupancy sensors

Occupancy sensors are used primarily for bathrooms, conference rooms and storage areas. This is an energy waste issue and not a health issue. The payback time of most occupancy sensors is in the range of two to five years, and yet first-cost economics prevent the installation of occupancy sensors in the majority of cases where they would save energy and lighting maintenance costs.[citation needed]

Failure to delamp or use available lighting controls

Failure to delamp or use available lighting controls is a common issue associated with over-illuminated buildings. Many instances of "designed in" over-illumination can be corrected by simple actions of building managers, following an illumination survey. In many instances over-illumination can be solved by removing a fraction of the lights or fixtures from a ceiling lighting system. In other cases a lighting retrofit can be conducted to replace older, less energy efficient fixtures with newer ones. Lighting retrofits can also be designed to reduce over-illumination; retrofits have typical payback periods of two to four years. In simpler cases many fluorescent ceiling illumination systems have multiple switch settings that allow tuning of the light intensity delivered,[2] the most common version of this control being the "three-level switch", also called A/B switching. Much of the benefit of the excess illumination reduction comes from a better ratio of natural light to fluorescent light that can result from any of the above changes. Research has been conducted showing worker productivity gains in settings where each worker selects his or her own lighting level.[6]

Health effects of over-illumination or improper spectral composition of light include increased headache incidence, worker fatigue, medically defined stress, decrease in sexual function and increase in anxiety.[7][8][9][10] The health consequences are particularly significant of improperly matching the color spectrum of sunlight when illuminating the workplace.[8][11][12]

Migraine headaches have been cited by some individuals as being caused by excessive light. In one survey over-illumination was listed as the number two trigger for migraines, with 47% of the respondents reporting bright light as the principal trigger of their migraine episode.[7] Not only does bright light induce headache, but certain spectral distributions can increase the incidence of headache.[12]

Fatigue is a common complaint from individuals exposed to over-illumination, especially with fluorescent media.[8] Some studies have shown that the flicker and over-illumination combined in some fluorescent systems yield particularly high fatigue incidence. Research on circadian rhythm in humans indicates that one reason for fatigue stems from the incorrect color spectrum of fluorescent light.[citation needed]

Stress and anxiety are frequent outcomes from working in a setting of intense (especially fluorescent) lighting. Research has shown that annoyance from bright light leads to medical stress.[9] It is clear that brighter, less spectrally correct light induces clinically measurable stress,[13] and it is suggested that for children this over-illumination may interfere with the learning process. For example, children experiencing any form of stress are more likely to suffer from dysgraphia, a problem in learning to write. Task performance can also be compromised for people conducting work under artificial (e.g. fluorescent as opposed to natural light).[10] The annoyance with purely artificial light and preference by office workers for natural light has been demonstrated by a number of studies spanning eastern and western cultures.[14] Fluorescent lighting has also been linked to aggravating other psychological disorders such as agoraphobia.[15]

Hypertension effects of over-illumination can lead to aggravation of cardiovascular disease and erectile dysfunction, which impacts are outcomes of long term cumulative exposure and associated systematic increases in blood pressure. The mechanism of this effect seems to be stress by related upregulation of adrenaline production akin to the fight-or-flight response.[16][17] When adrenalin is released into the bloodstream it causes vasoconstriction, a known precursor to both hypertension and erectile dysfunction. Analogous female sexual side effects are thought to result in the female anatomy from reduced blood flows.

Circadian rhythm disruption is primarily caused by the wrong timing of light in reference to the circadian phase. It can also be affected by too much light, too little light, or incorrect spectral composition of light. This effect is driven by stimulus (or lack of stimulus) to photosensitive ganglion cells in the retina. The "time of day", the circadian phase, is signalled to the pineal gland, the body’s photometer, by the suprachiasmatic nucleus. Bright light in the evening or in the early morning shifts the phase of the production of melatonin (see phase response curve). An out-of-sync melatonin rhythm can worsen cardiac arrhythmias and increase oxidized lipids in the ischemic heart. Melatonin also reduces superoxide production and myeloperoxide (an enzyme in neutrophils which produces hypochlorous acid) during ischemia-reperfusion.[12][18]

In practice, adverse outcomes seem to arise most commonly among workers subject to intense fluorescent light, which is poorly matched to the spectrum of sunlight. According to one set of researchers,[who?] the body translates this condition as "total darkness" and resets the circadian clock incorrectly.[12] Not only does this result in fatigue, but also immuno-suppressive behavior that has been shown to be linked to increased cancers. The research indicates that increasing the ratio of natural light to artificial solves much of the problem, provided the total illumination level is not driven excessively high. Many of these health impacts may be primarily due to the spectrum of the light rather than the overall level of illumination, but more research is required to establish this.

Excessive energy use is often tolerated because the person who bears the cost is not the one making day to day decisions about lighting. Building managers and not building owners usually structure such things as janitorial use of lighting, setting or installation of timers, or the choice of lighting fixtures. Another contributor is a leasing structure, common in the U.S., where the tenant pays none of the electricity costs.

There are also myths which continue to propagate, including better lighting decisions. One such is the idea that it costs more to turn fluorescent lighting off and on again than to keep it running. According to the U.S. Department of Energy, the amount of electricity consumed in lighting up a fluorescent lamp is equal to a few seconds or less of normal operation.[19][20] Taking into account the extra wear on the bulb caused by turning it off and on, the lamp has to not be needed for between five and fifteen minutes, depending on the type of lamp and other factors.[20] Another myth is that more light is better, which is contradicted by health data.

Building automation and lighting control solutions are now available to help reduce energy usage and cost by eliminating over-illumination. These solutions provide centralized control of all lighting within a home or commercial building, allowing easy implementation of scheduling, occupancy control, daylight harvesting and more. Many systems also support demand response and will automatically dim or turn off lights to take advantage of DR incentives and cost savings.

Many newer control systems are using wireless mesh open standards (such as ZigBee), which provides benefits including easier installation (no need to run control wires) and interoperability with other standards-based building control systems (e.g. security).[21]