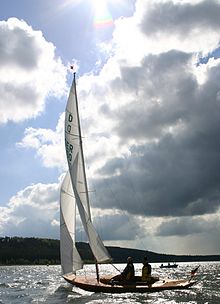 Wooden dragon, built by Abeking & Rasmussen (1954) on the Großer Brombachsee

The International Dragon is a one-design keelboat.

The Dragon was designed by Norwegian Johan Anker in 1929. In 1948 the Dragon became an Olympic Class, a status it retained until the Munich Olympics in 1972. The Dragon's long keel and elegant metre-boat lines remain unchanged, but today Dragons are constructed using the latest technology to make the boat durable and easy to maintain. GRP construction was introduced in 1973 and the rigging has been regularly updated.

The Dragon Class is actively represented in over 26 countries in 5 Continents. There were 1444 boats registered in 2004 and the number of boats built has averaged 45 per year. There are many more which are used for day sailing or cruising. The World Championships are held in every odd year and the European Championships are held annually. The Gold Cup, which can only be held in certain specified European countries, is unique in that all six races count without discard. It is held annually and often attracts over 100 entries, usually starting in one fleet.

A strong Class Association manages the class rules carefully to ensure safety, high quality and uniformity. Spars and sails have a wide range of adjustment during racing, allowing a skillful crew to optimize the boat for any conditions. Crew weight limits, and restrictions on hiking out allow the Dragon to be raced successfully by a range of ages and genders. It is possible to trail the Dragon behind many four-wheel drive vehicles. It is often dry-sailed.

The International Dragon Association (IDA) was founded on 31st October 1961 with London as its headquarters. The principal objects of the IDA are:

The World Championship is held in alternate years in all areas where Dragons are sailed, and must be one of the most difficult regattas to win in the sailing world. Many of the world's finest sailors have spent years trying to lift this trophy presented by Prince Constantine of Greece.

This event attracts worldwide media attention and a lifetime's respect for the winner. Regional Championships (European, North American,(Pan-pacific) are held in the other years, where competition is no less intense.

Entry to the event is by qualification at National level. 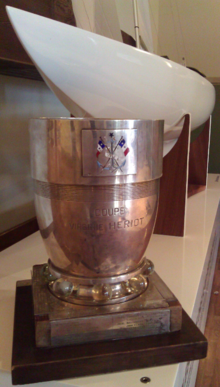 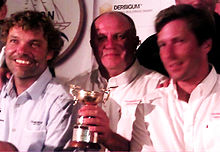 The Winners of the 2011 Dragon Gold Cup: Markus Wieser, Sergey Pughchev and Matti Paschen with the Gold Cup.

Members of the Clyde Yacht Clubs' Association created specific rules for this competition and donated a perpetual trophy made of pure gold for an annual international race. From the beginning, the Gold Cup was considered a family event for the Dragon Sailors and could be raced by yachts of the International Dragon Class belonging to any country, and for this reason was a very well attended event.

Until 1965, the year of the first Official World Championship, the Gold Cup was considered the unofficial World Cup. The first rules created by the Clyde Yacht Clubs' Association established that the Cup should be sailed annually and that the Cup should be retained by the winner for one year only. It also established that the event should take place in rotation in the following countries: Scotland, France, Sweden, Germany, Holland and Denmark.

With the revision of the rules in 1997, the number of hosting countries was enlarged to eleven: Belgium, Denmark, France, Germany, Ireland, Netherlands, Norway, Portugal, Spain, Sweden and the United Kingdom.

The hosting country and the Organising Authority continue to be selected by the Clyde Yacht Clubs' Association in conjunction with the International Dragon Association and the number of participants was limited to 120.