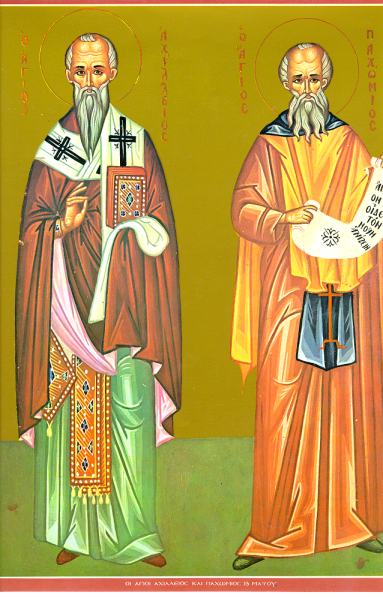 Achillius was metropolitan of in , , and is remembered primarily for his vehement defense of orthodoxy during the Council of Nicea and a he performed in testimony against .

Taking up a stone, Achillius called to the Arians: 'If is a creature of God, as you say, tell to flow from this stone.' The heretics kept silent, amazed at this demand by St. Achillius. Then the saint continued: 'And if the is equal to the Father, as we believe, then let oil flow from this stone.' And oil flowed out, to the amazement of all.

Upon returning from the Council, Achillius is reputed to have "cast down many pagan temples, built many churches, [and] cast out many demons".

We must mention especially, St. Achilius, in the fourth century, whose feast is on 15 May, and who is celebrated for his miracles.

Achillius died in Larissa in the year 330. When Samuel, King of Bulgaria, conquered Thessaly, he translated the s of Achillius to , to an island in a lake that was subsequently named after the saint.

* [http://www.goarch.org/en/chapel/saints.asp?contentid=56 Achilles, Bishop of Larissa] , from the Greek Orthodox Archdiocese of America: "Apolytikion", "kontakion", and a reading for 15 May
* [http://www.oramaworld.com/product_info.php/cPath/1000_1700_1705_1730/products_id/10161 Icon of Achillios] at OramaWorld.com
* [http://www.culture.gr/2/21/212/21211n/e212kn08.html Basilica of St. Achilleios at Lake Prespa] from the Hellenic Ministry of Culture
* [http://www.ditikimakedonia-region.com/en_contents.asp?category=109&id=138Saint Achillios] : article on the islet which houses the ruins of the basilica
*no icon [http://www.katolsk.no/biografi/alarissa.htm Den hellige Achilles av Larissa]