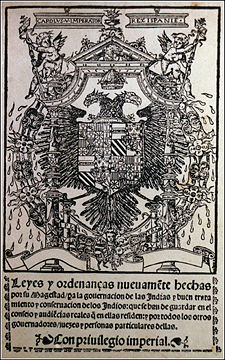 The New Laws, in Spanish Leyes Nuevas, issued November 20, 1542 by King Charles V of Spain regarding the Spanish colonization of the Americas, are also known as the "New Laws of the Indies for the Good Treatment and Preservation of the Indians", and were created to prevent the exploitation of the Indigenous peoples of the Americas by the Encomenderos (large enterprise landowners) by strictly limiting their power and dominion. [1]

Blasco Núñez Vela, the first Viceroy of Peru tried to enforce The New Laws which caused the encomenderos to revolt in a large scale rebellion in which he was killed by the landowning faction lead by Gonzalo Pizarro. Having seen the effects of the New Laws in the Viceroyalty of Peru, Antonio Mendoza, Viceroy of New Spain decided not to enforce the New Laws in his territories, in order to avoid conflict with the encomenderos. In this way due to massive pressure from the landowning classes the New Laws were never implemented in the two largest colonies of the Spanish Empire.

The New Laws were the results of a reform movement spurred by what was seen as the failure of the decades-old Leyes de Burgos (Laws of Burgos), issued by King Ferdinand II of Aragon on December 27, 1512. These laws were the first set of rules created to control relations between the Spaniards and the recently conquered indigenous people, but they appeared to have simply legalized the system of forced Indian labor. During the reign of King Charles V, the reformers gained steam, with Spanish missionary Bartolomé de las Casas as a notable leading advocate. His goal was the abolition of the encomienda system, which forced the Indians to abandon their previous lifestyle and homelands, and destroyed their culture and traditions. He was able to influence the King, and the fruit of the reformers' labor was the New Laws. His active role in the reform movement earned Bartolomé de las Casas the nickname, "Defender of the Indians".

The New Laws consisted of many regulations on the encomienda system, including its solemn prohibition of the enslavement of the Indians and provisions for the gradual abolition of the encomienda system. The New Laws stated that the natives would be considered free persons, and the encomenderos could no longer demand their labor. The natives were only required to pay the encomenderos tribute, and if they worked, they would be paid wages in exchange for their labor. The laws also prohibited the sending of indigenous people to work in the mines unless it was absolutely necessary, and required that they be taxed fairly and treated well. It ordered public officials or clergy with encomienda grants to return them immediately to the Crown, and stated that encomienda grants would not be hereditarily passed on, but would be canceled at the death of the individual encomenderos.

When the New Laws were passed, every European man in Peru learned that his allotment of land and Indians could be confiscated if he was guilty of having taken part in the civil disturbances of Francisco Pizarro and Almagro. As a result, the promulgation of the New Laws caused great unrest in the Spanish Americas, leading to a revolt in Peru, led by Gonzalo Pizarro. Pizarro headed protesting landowners who took to arms in order to "maintain their rights by force."

Gonzalo Pizarro was invited by the Supreme Court to assume control over its government after marching from Bolivia to Lima with his troops. Pizarro forced himself upon Lima and Quito. The revolt led to the overthrow of Viceroy Blasco Núñez Vela, who had attempted to impose the decrees. Pizarro and his army defeated and killed Núñez Vela in 1546. Pizarro's power stretched all the way to Panama. Charles V and the court became alarmed and were convinced that the immediate abolition of the encomienda system would bring economic ruin to the colonies. To deal with the revolt, Charles V sent Pedro de la Gasca, a bishop and diplomat in the service of the king, without an army but with full powers to rule and negotiate a settlement. However, Pizarro declared Peru independent from the King. La Gasca saw fit to suspend the New Laws. Pizarro was later captured and "executed as a traitor of the King."

Most of the ordinances of the New Laws went on to be incorporated into the general corpus of the Laws of the Indies, except where they were superseded by newer laws.

A weaker issue of the New Laws was issued in 1552.