North Finchley is a suburb of London in the London Borough of Barnet, situated 7 miles (11.3 km) north-west of Charing Cross.

North Finchley is centred on Tally Ho Corner, the junction of the roads to East Finchley, Finchley Central and Whetstone. 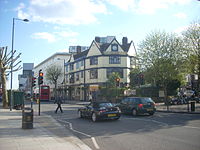 It is primarily a residential and shopping area, with several supermarkets and many restaurants. The artsdepot, a local community arts centre including a gallery, a studio and a theatre, opened on October 23, 2004, in an attempt to revitalise the area and to fill a gap created by the demolition of the Gaumont cinema, and what had become an open air market.

The area has mainly 19th century housing ranging from quaint Victorian cottages to substantially larger Victorian double-fronted houses. There is also a dominant Edwardian style toward Woodside Park and Nether Street but with some modern houses, probably built between 1930s and 1960s, towards Friern Barnet. On Friern Barnet Lane there are some mansion style properties and on Tally-Ho corner, a development of luxury flats, above the artsdepot with views over Mill Hill and Hertfordshire. There are few Local Authority estates in the area but the largest, and still pleasant, is in Woodside Park where ex-Spice Girl Emma Bunton grew up.

The new North Finchley bus station opened in 2004, but closed several months later due to safety issues after a pensioner walked into the shelter through the wrong entrance, was hit by a bus, and died. The bus station was reopened in March 2007 after safety improvements were implemented. They included the addition of a barrier at the exit and a public address system. A week after the reopening, the barriers were declared faulty."Incompetence", Hendon and Finchley Times, 2007-03-21, http://www.hendontimes.co.uk/mostpopular.var.1276595.mostviewed.incompetence.php  The barrier was refitted a week after the fault was declared.

The original bus station was close to the site of the new one. It had a single bus lane next to where the “artsdepot” now stands and it was closed shortly before construction began of that and the new bus station. The old bus station was served by routes 82, 260 and 134 which all terminated at North Finchley. However, due to the direction the new bus station now faces, it is served by routes 82 and 460, which cover that part of the suspended 260 route between North Finchley and Willesden, as that route was shortened. It is also served by through routes 221 and 125 to Edgware and Finchley Central, respectively. The Cricketers pub used to stand adjacent to the old bus station.

On 26 July 1994 a bomb exploded outside Balfour House, a prominent building on North Finchley High Street and home to an Israeli charity. Earlier, on the same day, a bomb had exploded outside the Israeli embassy.[1] As of mid-2008, a police presence is still evident in front of Balfour House.

Finchley was created an urban district of Middlesex in 1894. In 1932 it was created as the Municipal Borough of Finchley, but in 1965 the municipal borough was abolished and its area became part of the London Borough of Barnet.