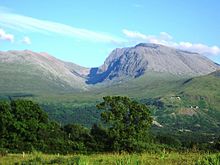 Ben Nevis is the highest Munro in Britain

The Munros of Scotland are known for presenting challenging conditions to hikers, particularly in winter when a number of fatalities are reported each year. Nevertheless, a popular practice amongst hillwalkers is "Munro Bagging", the aim being to climb all of the listed Munros. As of 2009, more than 4,000 have reported completing their round. The first continuous round of the Munros was completed by Hamish Brown in 1974, whilst the current holder of the record for the fastest continuous round is Stephen Pyke who completed his 2010 round in just under 40 days.

Before 1891 and the publication of Munros Tables there was considerable uncertainty about the number of peaks in Scotland over 3,000 feet. Estimates ranged from as few as 31 in the guides written by M.J.B. Baddeley, up to 236 listed by Robert Hall in the third edition of The Highland Sportsman and Tourist, published in 1884. One of the aims of the Scottish Mountaineering Club, formed in 1889, was to rectify this situation and accurately document all of Scotland's mountains over 3,000 feet. Sir Hugh Munro, a founding member of the Club, took on the task using his own experience as a mountaineer, as well as detailed study of the Ordnance Survey Six-inch to the mile and One-inch to the mile map series.[1][2]

Munro's research produced a set of tables which were published in the Scottish Mountaineering Club Journal in September 1891. They listed 538 summits over 3,000 feet, of which 283 were regarded as "separate mountains"; the term Munro applies to the latter, while the lesser summits are known as tops. Munro did not set any measure of topographic prominence by which a peak qualified as a separate mountain, and much debate has since taken place over how distinct two hills must be if they are to be considered as two separate Munros.

The Scottish Mountaineering Club have carried out a number of revisions of the tables, both in response to new height data on Ordnance Survey maps and to address the perceived inconsistency as to which peaks qualify for Munro status. In 1992, the publication of Alan Dawson's book Relative hills of Britain, showed that three tops not already considered summits, had a prominence of more than 500 feet (152 m).[citation needed] Given this they would have qualified as Corbett summits had they been under 3,000 feet. In the 1997 tables these three tops, on Beinn Alligin, Beinn Eighe and Buachaille Etive Beag, gained full Munro summit status. Dawson's book also highlighted a number of significant tops with as much as 60 metres (197 ft) of prominence which were not listed as Munro subsidiary tops. The 1997 tables promoted five of these to full Munro status.[citation needed]

Other classification schemes in Scotland, such as the Corbetts 2,500–3,000 ft (760–910 m) and Grahams 2,000–2,500 ft (610–760 m), require a peak to have a prominence of at least 500 feet for inclusion. The Munros however, still lack a rigid set of criteria for inclusion, with many summits of lesser prominence listed, principally due to time or distance factors rendering their summits difficult to reach. The 1997 tables ironed out many anomalies, but despite it being the highest-profile hill list in UK, in a number of people’s eyes, the list still is, and will probably remain, not wholly satisfactory.[citation needed]

During May and July 2009 several mountains were re-surveyed by the Munro Society to determine a more accurate height reading for those mountains which are known to be close to the 3,000 ft figure. In a press release on 10 September 2009 it was announced that the mountain Sgurr nan Ceannaichean, south of Glen Carron, has a height of 913.43 metres (2,996.8 ft).[3] As a result of the re-surveys the Scottish Mountaineering Club removed the Munro status of Sgurr nan Ceannaichean and this mountain is now a Corbett.[4]

The current revision of the tables, published in 2009, lists 283 Munros and 227 further subsidiary tops. 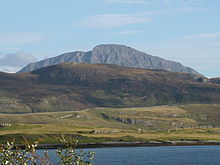 Ben Hope is the most northerly Munro 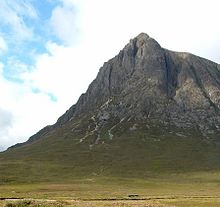 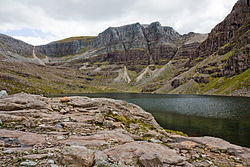 The triple buttresses of Coire Mhic Fearchair on Beinn Eighe

Despite their relatively modest height compared with some continental ranges, walking and climbing in the Scottish mountains may be made treacherous by their latitude and exposure to Atlantic and Arctic weather systems. Even in summer, conditions can be atrocious; thick fog, strong winds, driving rain and freezing summit temperatures are not unusual.

Winter ascents of certain Munros are widely accepted to provide among the most challenging ice climbs in Europe. Some walkers are unprepared for the often extreme weather conditions on the exposed tops and many fatalities are recorded every year, often resulting from slips on wet rock or ice.

Some hillwalkers climb Munros with an eye to climbing every single one, a practice known as "Munro bagging". Having climbed all of them, a walker is entitled to be called a Munroist. Munro-bagging is a form of peak bagging.

Perhaps the most famous Munro is Ben Nevis in the Lochaber area. It is the highest peak in the British Isles, with an altitude of 1,344 metres (4,409 ft). Other well-known Munros include:

As of 2009, more than 4,000 people have completed the Munros.[5] The SMC, who maintain a list of those Munroists who have reported completing the Munros, have attempted to popularise the archaic spelling of compleation.[6]

Hugh Munro never completed his own list, missing out on Càrn an Fhidhleir and Càrn Cloich-mhuillin (downgraded to a "top" in 1981).[7] Sir Hugh is said to have missed the Inaccessible Pinnacle of Sgurr Dearg, on the Isle of Skye, which he never climbed.[8] However the "In Pinn", as it is known colloquially within Scottish mountaineering, was only listed as a subsidiary top on his list (despite being several metres higher than Sgurr Dearg, which was listed as the main top).[9]

The first "compleationist" was to be the Reverend A. E. Robertson, in 1901.[7] However, research has cast doubt on this claim, and it is not certain that he reached the summit of Ben Wyvis.[10] Also it is known that Robertson did not climb the Inaccessible Peak of Sgurr Dearg.[11] If Robertson is discounted, the first Munroist is Ronald Burn, who completed in 1923. Burn is also (indisputably) the first person to climb all the subsidiary "tops".[7]

The person with the most rounds of Munros is Steven Fallon from Edinburgh, who has 'completed' thirteen rounds as of 2006.[12]

Chris Smith became the first Member of Parliament to complete the Munros when he reached the summit of Sgurr nan Coireachan on 27 May 1989.[13]

Ben Fleetwood is probably the youngest person to have completed a round. He climbed the final Munro of his round – Ben More – on 30 August 2011 at the age of 10 years and 3 months.[14] The youngest compleationist to have done the round without the presence of a parent or a guardian is probably Andy Nisbet, who finished his round in 1972 aged 18 years and 1 month.[14]

In the winter of 2005/06, Steve Perry completed a continuous unsupported round entirely on foot (and ferry).[citation needed] He is also the first person to have completed two continuous Munro rounds, having also walked Land's End to John O'Groats via every mainland 3,000 ft mountain between 18 February 2003 and 30 September 2003.[18]

Charlie Campbell, a former postman from Glasgow, held the record for the fastest round of the Munros between 2000 and 2010.[citation needed] He completed his round in 48 days 12 hours, finishing on 16 July 2000, on Ben Hope.[citation needed] His record was broken by Stephen Pyke of Stone, Staffordshire, in 2010 who completed the round in 39 days, 9 hours. Pyke's round started on the island of Mull on 25 April 2010 and finished on Ben Hope in Sutherland on 3 June 2010. He cycled and kayaked between Munros; no motorised transport was used. He was backed by a support team in a motor home, but had to camp out in the more remote areas.[19]

On 18th September 2011 Alex Robinson and Tom O'Connell finished their self-propelled continuous round on Ben Hope in a time of 48 days 6 hours and 56 minutes setting the second fastest time ever. At the age of just 21, Alex also became the youngest person to have completed a continuous round without the use of any motorised transport.

The SMC recognises six peaks in England, fifteen in Wales and thirteen in Ireland that would be Munros or Munro Tops if they were in Scotland. These are referred to as Furth Munros, i.e. the Munros furth of Scotland.[20]