Face the Music (New Kids on the Block album)

Face the Music (New Kids on the Block album) 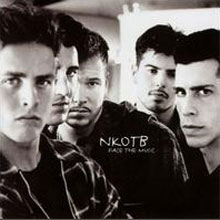 "Face the Music" is the fourth album by (short for New Kids on the Block), released in January 1994.

In 1993, after about two years out of the , the New Kids went back into the studio and began recording their fourth studio album (sixth overall), before splitting up a year later. By this point, due to a strong backlash and allegations of , the group pushed for a more mature image and song selection that would appeal to fans. In addition, they had grown out of the "New Kids" name; was 20, was 21, and were 24, and was 25 years old. Jordan Knight, Wahlberg, and Wood fought for creative input and control on the album, as most of their material was previously rejected in favor of professional song-writers.

Having been dogged with an "uncool" stigma the years previous, the boys decided to sever their ties with producer and songwriter , who had been instrumental in their early success. At the request of , they shortened their name to the more mature-sounding NKOTB and developed a harder sound with which they hoped to reconnect with members of their fanbase, and appeal to a wider audience. "Dirty Dawg" did fairly well on the charts, but a Canadian station () banned the due to its suggested violence and misogynistic themes. Although not a major commercial success, the critical reception was positive, and a cross-country tour was in the works. However, NKOTB only could find bookings at nightclubs and theatres, a far cry from the arenas and stadiums they had been accustomed to playing in while in their peak years. During the tour, Jonathan Knight dropped out of the band due to increased s and anxiety, and the rest of the group decided to cancel the rest of the tour.