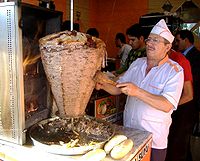 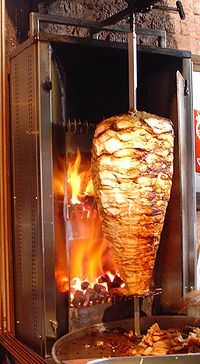 Shawarma is a Middle Eastern[1][2] sandwich-like wrap of shaved lamb, goat, chicken, turkey, beef, or mixed meats. The meat is placed on a spit, and may be grilled for as long as a day. Shawarma is a fast-food staple across the Middle East, Europe and the Caucasus.

Shawarma has many variants in preparation, serving style, and name. The word shawarma (

/ʃəˈwɑːrmə/) comes from the Turkish word çevirme [tʃeviɾˈme] 'turning', though the dish is usually called döner kebab 'turning kebab' in Turkish. In Greek, it was formerly called ντονέρ /doˈner/, and now called gyros 'turned'; in Armenian, it is "tarna", literally meaning "to turn".

Shawarma is made by alternately stacking strips of fat and pieces of seasoned meat (beef, lamb or marinated chicken) on a stick—an onion or tomato is sometimes placed at the top of the stack for additional flavoring. The meat is roasted slowly on all sides as the spit rotates in front of, or over, a flame for hours (see rotisserie). Traditionally a wood fire was used; currently, a gas flame is common. While specialty restaurants might offer two or more meat selections, some establishments have just one skewer.

While cooking, the meat is shaved off the stack with a large knife, an electric knife or a small circular saw, dropping to a circular tray below to be retrieved. Shawarma is eaten as a fast food, made up into a sandwich wrap with pita bread or rolled up in an Armenian Lavash flatbread together with vegetables and dressing. A variety of vegetables come with the shawarma which include: cucumber, onion, tomato, lettuce, eggplant, parsley, pickled turnips, pickled gherkins, and cabbage. You have the option to get French fries in some countries including: Jordan, Syria, Lebanon, Palestine, Israel, Turkey, Egypt, Saudi Arabia, also countries in Europe such as Romania, Germany, Bulgaria and even the U.K.[3] Other options include thick cut French fries served inside the lavash to help soak up the sauce and juices keeping them inside the wrap.[4]

Dressings include: tahini (or tahina), Amba sauce (pickled mango with Chilbeh), hummus, or flavored with vinegar and spices such as cardamom, cinnamon, and nutmeg. Chicken shawarma is served with garlic mayonnaise, toum (garlic sauce), pomegranate concentrate, or skhug (a hot chili sauce). Once the shawarma is made, it might be dipped in the fat dripping from the skewer and then briefly seared against the flame.

Beef can be used for shawarma instead of lamb, and turkey is used instead of chicken. In Saudi Arabia, goat is as common as beef or lamb. Less common alternatives include fish and sausage. Some shawarma stores use hot dog buns or baguettes, but most have pita and lavash. Sometimes, beef shawarma—despite its name—contains some lamb in addition to the beef, to ensure juiciness. 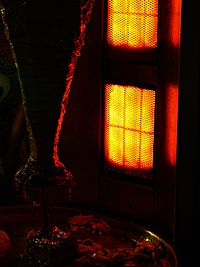 Shawarma in the UAE

In some regions of Canada, the term "shawarma" is interchangeable with donairs. In the Montreal region, chicken "shawarma" is often confused with chicken kebabs, known as "Shish taouk". 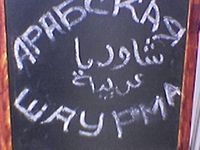 A shawarma ad in Russian and Arabic, Moscow 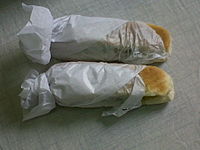 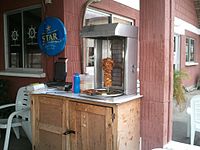