The North Geelong Warriors Football Club, (previously known as North Geelong Croatia), is a Croatian backed football (soccer) club from the regional Victorian city of Geelong. The club continues to have strong links to and support from the city’s large Croatian community. The club is a regular participant in the Australian-Croatian Soccer Tournament, which it has hosted 4 times. North Geelong also competes in the annual Geelong Community Shield Cup (previously known as the Geelong Advertiser Cup) which the club has dominated throughout the years and has won a total of 17 Cup titles (the most titles won by a club).

North Geelong holds the record in the Geelong Community Shield Cup with 7 consecutive wins from 1991 - 1997. North Geelong's biggest victory in a final was in 1996 at Stead Park with a record breaking 8-1 thrashing of rivals Geelong. The Geelong Cup is in its 31st year with North Geelong winning half of the Cup's titles.

By 1984 the club had risen up to Division 2 where they remained until they won the Division 2 title in 1989, getting promoted to Division 1. 1990 saw Melbourne Croatia legend Brank Culina take over as coach, he would lead the side for 3 seasons. He would go on to have an incredible impact on the club in what would be its most successful period. In 1991 they won the Division 1 title, finishng a point ahead of Knox City. So in 1992 the club entered the Victorian Premier league for the very first time. In its inaugural season the club surprised everyone finishing first and collecting the Minor Premiership. The club went on to make the Grand Final. They faced former National Soccer League champions Brunswick Juventus at Middle Park. North Geelong’s George Karkaletsis opened the scoring on the 22nd minute. Brunswick equalized 4 minutes later. The match remained 1-1 at full time, taking it into extra time. North Geelong ripped Brunswick apart scoring 3 unanswered goals from Adrian Cervinski, Robert Markovac and Robert Cosic. It was an unprecedented event, the only time a newly promoted side had won the title in their first season. Players in this championship side included Steve Horvat, Adrian Cervinski and David Cervinski. All three players would become successful players in the National Soccer League. All three were a part of the Melbourne Knights National Soccer League championship side of the mid 90s. 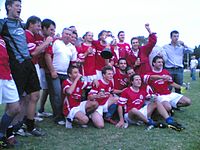 1993 was another successful season. The club finished third in the regular season, making the finals for a second year in a row. But this time their finals campaign did not prove to rewarding as in the previous season. The club lost both its finals matches, including a heartbreaking loss in extra time to Sunshine George Cross.

The next three seasons saw the club miss out on finals action, finishing mid table. But some joy came with the club producing another star player in Josip Skoko. 1997 proved to be a disastrous season for the club, finishing 2nd last and being relegated to Division 1. In 1999 the club was relegated to Division 2. It had been a quick fall from the top. The club remained in Division 2 for the next 6 seasons, with poor results. All that changed by 2005, club legends Adrian Cervinski and David Cervinski had returned to the club. The club won the championship in 2005, losing only 4 matches and being promoted to Division 1.

The club went into the 2006 Division 1 season with high hopes, they were undefeated in their first 7 games. But slowly they fell away, eventually finishing a respectable 4th and missing out on promotion to the Victorian Premier League. With a number of players leaving the squad at the start of the 2007 season, North Geelong struggled throughout the season and were subject to relegation. However with a new batch of players and new coach Vinko Buljubasic the club came 4th at the end of the 2008 season. In 2009 the club was promoted back into the State League Division 1 after clinching the Division 2 title. After an inconsistent 2010 season, the club finished in 8th spot, well clear of relegation, but also lower than expectations. In the summer of 2011, Vinko Buljubasic was relieved of his duties as manager and replaced by Ante Skoko with his brother, a recently retired professional footballer, Josip Skoko as his assistant.

Victorian Premier League Under 21 Player of the Year