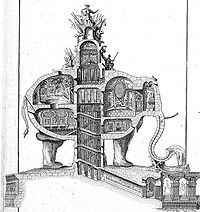 In 1758, he planned an addition to the Champs-Élysées in Paris, to be constructed where the Arc de Triomphe now stands. It consisted of three levels, to be built in the shape of an elephant, with entry via a spiral staircase in the underbelly. The building was to have a form of air conditioning, and furniture that folded into the walls. A drainage system was to be incorporated into the elephant's trunk. The French Government, however, was not amused and turned him down.[1][2] Napoleon would later conceive a similar construction, the Elephant of the Bastille.

Little of his work now survives.