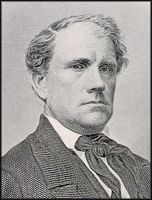 Wentworth was educated at the New Hampton Literary Institute [A Small Gore of Land, Merrill, Gowan et al. 1977] and graduating from the latter in 1836. Later that year, he left for Chicago, arriving in the city on October 25. He was managing editor of Chicago's first , the "Chicago Democrat", eventually becoming its owner and . He started a practice, and eventually entered . In 1844, he married Roxanna Marie Loomis.

As a Republican, Wentworth served as mayor of Chicago for two terms, 1857&ndash;1858 and 1860&ndash;1861. Wentworth instituted s in the city and tried to clean up the city's morals. To do this, he hired spies to determine who was frequenting Chicago's brothels. In 1857, Wentworth led a raid on the Sands, Chicago's , which resulted in the burning of the area.

Wentworth was a personal friend of .

He authored "The Wentworth Genealogy - English and American". 1878, 3 Volumes, 2241 pages. The [http://books.google.ca/books?hl=en&id=KR8aAAAAIAAJ&dq=Wentworth+genealogy+english+and+american&printsec=frontcover&source=web&ots=MdAKBttWFa&sig=ZCKBnaY2lkD5LNC3xNWIwjBSi18#PPP1,M first] volume chronicles the ancestry of Elder William Wentworth, the first of this family in New England, and his first five generations of New World descendants. The second and [http://contentdm.lib.byu.edu/cdm4/document.php?CISOROOT=/FH10&CISOPTR=58611&REC=17 third] volumes discuss the "Elder's" many descendants and others of the name. ("Chicago Giant: A Biography of "Long John" Wentworth". By Don E. Fehrenbacher. (Madison, Wis.: American History Research Center. 1957. Pp. viii, 278.))

From 1868, he lived at his country estate at 5441 South Harlem Avenue in Chicago where he owned about convert|5000|acre|km2|0 of land in what is today part of the Chicago neighborhood of Garfield Ridge and suburban Summit. Wentworth died at the estate in 1888, and was buried in Rosehill Cemetery. The house was then sold and lived in by another family for several decades until it was torn down in the mid-1960s to make way for new single family housing as the Garfield Ridge neighborhood exploded in population.