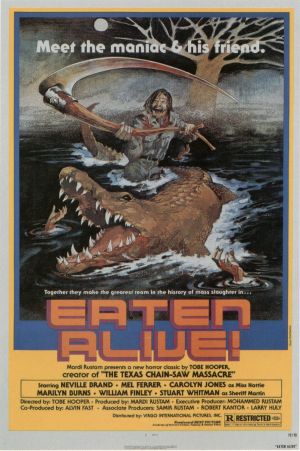 The local fleabag hotel is run by Judd (Brand), who keeps a pet crocodile. As guests arrive, Judd reveals that he is far from a typical hotel owner, and keen on introducing his lodgers to his and his pet.

After refusing a request from Buck (Robert Englund), a frisky customer, a is dismissed from her job at the town . She then makes her way to a run-down where she encounters Judd (Neville Brand), the mentally disturbed proprietor and his pet . Upon discovering his new lodger is a woman of questionable virtue, Judd attacks. He begins tearing at her blouse while ranting and raving, causing her to run outside, where Judd savagely finishes her off with an odd looking . However, once she is dead, Judd looks shocked by what he has done. But it is already too late. Judd's crocodile greedily eats the body, following which it turns on its former master and eats him alive.

* This movie was one of the so called "Video Nasties" in the UK during the early 80s. The movie wasn't successfully prosecuted for obscenity. Mary Whitehouse apparently took a personal objection to this movie, though she'd never actually viewed it.

* The film was inspired by serial killer , who reputedly fed over 20 victims to alligators as a means of disposal.

* Director used this movie's character Buck for the line in his kung fu homage movie , "My name is Buck, and I'm here to fuck".

* New York band Mortician used a soundbyte from the film for the intro to the song "Devoured Alive" from their 1998 Zombie Apocalypse EP.

* Robert Englund claimed in Samhain magazine (1988, no.14) “I found out recently from someone who saw it in Japan that they literally put in insert shots of me in that, so in Japan you can see bogus uncircumcised Robert Englund genitalia. In the American version I say a couple of rude words and I flirt with a girl in brassiere. In Japan it’s a monster shot, I need it. I’m just hoping the guy’s well hung!”