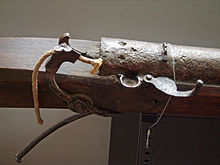 The matchlock was the first mechanism, or "lock" invented to facilitate the firing of a hand-held firearm. This design removed the need to lower by hand a lit match into the weapon's flash pan and made it possible to have both hands free to keep a firm grip on the weapon at the moment of firing, and, more importantly, to keep both eyes on the target. 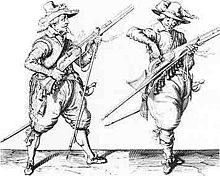 Engraving of musketeers from the 30 years war

The classic European matchlock gun held a burning slow match in a clamp at the end of a small curved lever known as the serpentine. Upon the pulling of a lever (or in later models a trigger) protruding from the bottom of the gun and connected to the serpentine, the clamp dropped down, lowering the smoldering match into the flash pan and igniting the priming powder. The flash from the primer travelled through the touch hole igniting the main charge of propellant in the gun barrel. On release of the lever or trigger, the spring-loaded serpentine would move in reverse to clear the pan. For obvious safety reasons the match would be removed before reloading of the gun. Both ends of the match were usually kept alight in case one end should be accidentally extinguished.

Earlier types had only an "S"-shaped serpentine pinned to the stock either behind or in front of the flash pan (the so-called "serpentine lock"), one end of which was manipulated to bring the match into the pan.[1][2]

Most matchlock mechanisms mounted the serpentine forward of the flash pan. The serpentine dipped backward, toward the firer, to ignite the priming. This is the reverse of the familiar forward-dipping hammer of the flintlock and later firearms.

A type of matchlock was developed called the snapping matchlock, in which the serpentine was strongly spring-loaded, and released by pressing a button, pulling a trigger, or pulling a short string passing into the mechanism. As the match was often extinguished after its relatively violent collision with the flash pan, this type fell out of favour with soldiers, but was often used in fine target weapons. 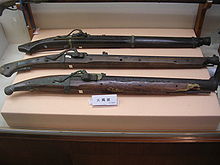 An inherent weakness of the matchlock was the necessity of keeping the match constantly lit. Being the sole source of ignition for the powder, if the match was not lit when the gun needed to be fired, the mechanism was useless, and the weapon became little more than an expensive club. This was chiefly a problem in wet weather, when damp match cord was difficult to light and to keep burning. Another drawback was the burning match itself. At night, the match would glow in the darkness, possibly revealing the carrier's position. The distinctive smell of burning match-cord was also a give away of a musketeer's position (this was used as a plot device by Akira Kurosawa in his movie Seven Samurai). It was also quite dangerous when soldiers were carelessly handling large quantities of gunpowder (for example, while refilling their powder horns) with lit matches present. This was one reason why soldiers in charge of transporting and guarding ammunition were amongst the first to be issued self-igniting guns like the wheellock and snaphance.

The matchlock was also uneconomical to keep ready for long periods of time. To maintain a single sentry on night guard duty with a matchlock, keeping both ends of his match lit, required a mile of match per year.[3]

The matchlock appeared in Europe in the mid-15th century, although the idea of the serpentine appears some 40 years previously in an Austrian manuscript. The first dated illustration of a matchlock mechanism dates to 1475, and by the 16th century they were universally used.

The Janissary corps of the Ottoman army adopted matchlock arms from Hungary gradually from the 1440s onwards.[4] Improved versions of the musket were transported to India by Babur in 1526.[5][6]

China is credited with inventing both gunpowder and firearms but the matchlock was introduced to China by the Portuguese. Europeans refined the primitive hand cannons used in China and in the 15th century the matchlock mechanism was developed. Portuguese arriving in China in the 16th century carried matchlocks and the Chinese obtained the technology for themselves and matchlocks were used by the Chinese into the 19th century.[7] 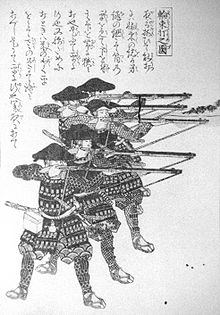 In Japan the first documented introduction of the matchlock which became known as the tanegashima was through the Portuguese in 1543.[8] The tanegashima seems to have been based on snap matchlocks that were produced in the armory of Goa India, which was captured by the Portuguese in 1510.[9] While the Japanese were technically able to produce tempered steel (e.g. sword blades), they preferred to use work-hardened brass springs in their matchlocks. The name tanegashima came from the island where a Chinese junk with Portuguese adventurers on board was driven to anchor by a storm. The lord of the Japanese island Tanegashima Tokitaka (1528–1579) purchased two matchlock rifles from the Portuguese and put a sword smith to work copying the matchlock barrel and firing mechanism. Within a few years the use of the tanegashima in battle forever changed the way war was fought in Japan.[10]

Despite the appearance of more advanced ignition systems such as that of the wheellock and the snaphance, the low cost of production, simplicity, and high availability of the matchlock kept it in use in European armies until about 1720. It was eventually completely replaced by the flintlock as the foot soldier's main armament.

There is evidence that matchlock rifles may have been in usage among some peoples in Christian Abyssinia in the late Middle Ages. Although modern rifles were imported into Ethiopia during the 19th century, contemporary British historians noted that along with slingshots the elderly used matchlock rifle weapons for self-defense and by the militaries of the Ras.[11][12] They were also known to have been used by the Somalian Adal Sultanate against Ethiopia.