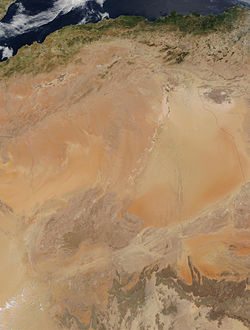 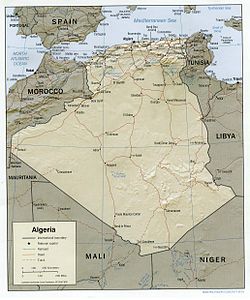 Shaded relief map of Algeria with settlements and roads.

Algeria comprises 2,381,741 square kilometers of land, more than four-fifths of which is desert, in northern Africa, between Morocco and Tunisia. It is the largest country in Africa. Its Arabic name, Al Jazair (the islands), derives from the name of the capital Algiers (Al Jazair in Arabic), after the small islands formerly found in its harbor. It has a long Mediterranean coastline, most of which is more properly termed the Alboran Sea, which is the westernmost element of the Mediterranean Sea.[1] The northern portion, an area of mountains, valleys, and plateaus between the Mediterranean Sea and the Sahara Desert, forms an integral part of the section of North Africa known as the Maghreb. This area includes Morocco, Tunisia, and the northwestern portion of Libya known historically as Tripolitania.

Stretching from the Moroccan border the Tell Atlas, including the Djebel Babor formation, is the dominant northwestern mountain range. Stretching more than 600 kilometers eastward from the Moroccan border, the High Plateaus (often referred to by their French name Hauts Plateaux) consist of undulating, steppe-like plains lying between the Tell and Saharan Atlas ranges. The plateaus average between 1,100 and 1,300 meters in elevation in the west, dropping to 400 meters in the east. So dry that they are sometimes thought of as part of the Sahara, the plateaus are covered by alluvial debris formed when the mountains eroded. An occasional ridge projects through the alluvial cover to interrupt the monotony of the landscape.

Higher and more continuous than the Tell Atlas, the Sahara Atlas range is formed of three massifs: the Ksour near the Moroccan border, the Amour, and the Oulad Nail south of Algiers. The mountains, which receive more rainfall than those of the High Plateaus, include some good grazing land. Watercourses on the southern slopes of these massifs disappear into the desert but supply the wells of numerous oases along the northern edge of the desert, of which Biskra, Laghouat, and Béchar are the most prominent.

Eastern Algeria consists of a massive area extensively dissected into mountains, plains, and basins. It differs from the western portion of the country in that its prominent topographic features do not parallel the coast. In its southern sector, the steep cliffs and long ridges of the Aurès Mountains create an almost impenetrable refuge that has played an important part in the history of the Maghrib since Roman times. Near the northern coast, the Petite Kabylie Mountains are separated from the Grande Kabylie range at the eastward limits of the Tell by the Soummam River. The coast is predominantly mountainous in the far eastern part of the country, but limited plains provide hinterlands for the port cities of Bejaïa, Skikda, and Annaba. In the interior of the region, extensive high plains mark the region around Sétif and Constantine; these plains were developed during the French colonial period as the principal centers of grain cultivation. Near Constantine, salt marshes offer seasonal grazing grounds to seminomadic sheep herders.

The Algerian portion of the Sahara extends south of the Saharan Atlas for 1,500 kilometers to the Niger and Mali frontiers. The desert is an otherworldly place, scarcely considered an integral part of the country. Far from being covered wholly by sweeps of sand, however, it is a region of great diversity. Immense areas of sand dunes called areg (sing., erg) occupy about one-quarter of the territory. The largest such region is the Grand Erg Oriental (Great Eastern Erg), where enormous dunes two to five meters high are spaced about 40 meters apart. Much of the remainder of the desert is covered by rocky platforms called humud (sing., hamada), and almost the entire southeastern quarter is taken up by the high, complex mass of the Ahaggar and Tassili n'Ajjer highlands, some parts of which reach more than 2,000 meters. Surrounding the Ahaggar are sandstone plateaus, cut into deep gorges by ancient rivers, and to the west a desert of pebbles stretches to the Mali frontier.

The desert consists of readily distinguishable northern and southern sectors, the northern sector extending southward a little less than half the distance to the Niger and Mali frontiers. The north, less arid than the south, supports most of the few persons who live in the region and contains most of the desert's oases. Sand dunes are the most prominent features of this area's topography, but between the desert areas of the Grand Erg Oriental and the Grand Erg Occidental (Great Western Erg) and extending north to the Atlas Saharien are plateaus, including a complex limestone structure called the M'zab where the M'zabite Berbers have settled. The southern zone of the Sahara is almost totally arid and is inhabited only by the Tuareg nomads and, recently, by oil camp workers. Barren rock predominates, but in some parts of Ahaggar and Tassili n'Ajjer alluvial deposits permit garden farming.

See also: Tropic of Cancer in the torrid zone 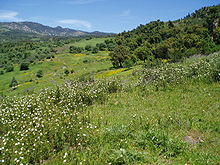 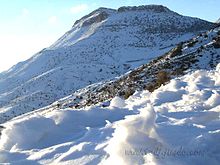 Mount Tahat of the Ahaggar Mountains, most elevated point in Algeria (9,852 ft)

Northern Algeria is in the temperate zone and enjoys a mild, Mediterranean climate. It lies within approximately the same latitudes as southern California and has somewhat similar climatic conditions. Its broken topography, however, provides sharp local contrasts in both prevailing temperatures and incidence of rainfall. Year-to-year variations in climatic conditions are also common.

In the Tell, temperatures in summer average between 21 and 24 °C (70 and 75 °F) and in winter drop to 10 to 12 °C (50 to 54 °F). Winters are not cold, but the humidity is high and houses are seldom adequately heated. In eastern Algeria, the average temperatures are somewhat lower, and on the steppes of the High Plateaus winter temperatures hover only a few degrees above freezing. A prominent feature of the climate in this region is the sirocco, a dusty, choking south wind blowing off the desert, sometimes at gale force. This wind also occasionally reaches into the coastal Tell.

In Algeria only a relatively small corner of the Sahara lies across the Tropic of Cancer in the torrid zone, but even in winter, midday desert temperatures can be very hot. After sunset, however, the clear, dry air permits rapid loss of heat, and the nights are cool to chilly. Enormous daily ranges in temperature are recorded.

Rainfall is fairly abundant along the coastal part of the Tell, ranging from 400 to 670 mm (15.7 to 26.4 in) annually, the amount of precipitation increasing from west to east. Precipitation is heaviest in the northern part of eastern Algeria, where it reaches as much as 1,000 mm (39.4 in) in some years. Farther inland the rainfall is less plentiful. Prevailing winds that are easterly and northeasterly in summer change to westerly and northerly in winter and carry with them a general increase in precipitation from September to December, a decrease in the late winter and spring months, and a near absence of rainfall during the summer months.

Clearing of land for agricultural use and cutting of timber over the centuries have severely reduced the once bountiful forest wealth. Forest fires have also taken their toll. In the higher and wetter portions of the Tell Atlas, cork oak and Aleppo pine grow in thick soils. At lower levels on thinner soils, drought-resistant shrubs predominate. The grapevine is indigenous to the coastal lowlands, and grasses and scrub cover the High Plateaus. On the Saharan Atlas, little survives of the once extensive forests of Atlas cedar that have been exploited for fuel and timber since antiquity.

The forest reserves in Algeria were severely reduced during the colonial period. In 1967 it was calculated that the country's forested area extended over no more than 24,000 square kilometres of terrain, of which 18,000 km2 were overgrown with brushwood and scrub. By contrast, woodlands in 1830 had covered 50,000 km2. In the mid-1970s, however, the government embarked on a vast reforestation program to help control erosion, which was estimated to affect 100,000 cubic meters of arable land annually. Among projects was one to create a barrage vert (green barrier) more or less following the ridge line of the Saharan Atlas and extending from Morocco to the Tunisian frontier in a zone 1,500 kilometers long and up to twenty kilometers wide.

The barrage vert consists principally of Aleppo pine, a species that can thrive in areas of scanty rainfall. It is designed to restore a damaged ecological balance and to halt the northern encroachment of the Sahara. By the early 1980s, the desert had already penetrated the hilly gap between the Saharan Atlas and the Aurès Mountains as far as the town of Bou Saâda, a point well within the High Plateaus region. The barrage vert project was ended in the late 1980s because of lack of funds.

This is a list of the extreme points of Algeria, the points that are farther north, south, east or west than any other location.