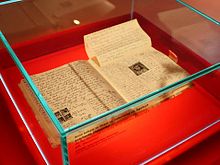 The original diary of Anne Frank at display in Berlin

A diary is a record (originally in handwritten format) with discrete entries arranged by date reporting on what has happened over the course of a day or other period. A personal diary may include a person's experiences, and/or thoughts or feelings, including comment on current events outside the writer's direct experience. Someone who keeps a diary is known as a diarist. Diaries undertaken for institutional purposes play a role in many aspects of human civilization, including government records (e.g., Hansard), business ledgers and military records.

Generally the term is today employed for personal diaries, normally intended to remain private or to have a limited circulation amongst friends or relatives. The word "journal" may be sometimes used for "diary," but generally a diary has (or intends to have) daily entries, whereas journal-writing can be less frequent.

Whilst a diary may provide information for a memoir, autobiography or biography, it is generally written not with the intention of being published as it stands, but for the author's own use. In recent years, however, there is internal evidence in some diaries (e.g., those of Ned Rorem, Alan Clark, Tony Benn or Simon Gray) that they are written with eventual publication in mind, with the intention of self-vindication (pre- or posthumous) or simply for profit.

By extension the term diary is also used to mean a printed publication of a written diary; and may also refer to other terms of journal including electronic formats (e.g., blogs).

As internet access became commonly available, many people adopted it as another medium in which to chronicle their lives with the added dimension of an audience. The first online diary is thought to be Claudio Pinhanez's "Open Diary," published at the MIT Media Lab website from 14 November 1994 until 1996.[1] Other early online diarists include Justin Hall, who began eleven years of personal online diary-writing in 1994,[2] Carolyn Burke, who started publishing "Carolyn's Diary" on 3 January 1995,[3] and Bryon Sutherland, who announced his diary The Semi-Existence of Bryon in a USENET newsgroup on 19 April 1995.[4]

Web-based services such as Open Diary (started in October, 1998) and LiveJournal (January, 1999) soon appeared to streamline and automate online publishing, but growth in personal storytelling came with the emergence of blogs. While the format first focused on external links and topical commentary, widespread blogging tools were quickly used to create web journals. Recent advances have also been made to enable the privacy of internet diary entries. For example, some diary software now stores entries in encrypted format, such 256-bit AES (Advanced Encryption Standard) encryption, and others only permit access to the diary after correct PIN entry on a secure USB device.

Other forms of diary

A travel journal, travel diary, or road journal, is the documentation of a journey or series of journeys.

A sleep diary or sleep log is a tool used in the diagnosis and treatment of sleep disorders.

The German Tagebuch is normally rendered as diary in English, but the term includes workbooks or working journals as well as diaries proper. For example, the notebooks of the Austrian writer Robert Musil are called Tagebücher.

Some officer cadets at the Royal Military College of Canada wrote their diaries in India ink on their t-squares; examples of these from the 1880s are retained in the College's museum.

A war diary is a regularly updated official record of a military unit's administration and activities during wartime maintained by an officer in the unit.

There are numerous examples of fictional diaries. One of the earliest printed fictional diaries was the humorous Diary of a Nobody by George Grossmith and his brother Weedon. 20th century examples include radio broadcasts (e.g. Mrs. Dale's Diary) and published books (e.g. the Diaries of Adrian Mole). Both prompted long-running satirical features in the magazine Private Eye: the former entitled Mrs Wilson's Diary in reference to Mary Wilson, wife of Prime Minister Harold Wilson, the latter entitled "The Secret Diary of John Major Aged 47¾" and written as a pastiche of the Adrian Mole diaries from the perspective of the then Prime Minister John Major.