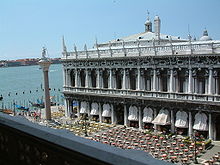 The Biblioteca Nazionale Marciana (English: National Library of St Mark's) is a library and Renaissance building in Venice, northern Italy; it is one of the earliest surviving public manuscript depositories in the country, holding one of the greatest classical texts collections in the world. The library is named after St. Mark, the patron saint of Venice. It is not to be confused with the State Archive of the Republic of Venice, which is housed in a different part of the city.[1]

The library was provided with a building designed by Jacopo Sansovino. The first sixteen arcaded bays of his design were constructed during 1537 to 1553, with work on frescoes and other decorations continuing until 1560. Sansovino died in 1570, but in 1588, Vincenzo Scamozzi undertook the construction of the additional five bays, still to Sansovino's design, which brought the building down to the molo or embankment, next to Sansovino's building for the Venetian mint, the Zecca. One of the early librarians, from 1530, was Pietro Bembo. However, the library stock began to be collected before the construction of the building. For example, the germ of the collections in the library was the gift to the Serenissima of the manuscript collection assembled by Byzantine humanist, scholar, patron and collector, Cardinal Bessarion; he made a gift of his collection on 31 May 1468: some 750 codices in Latin and Greek, to which he added another 250 manuscripts and some printed books (incunabula), constituting the first "public" library open to scholars in Venice. (In 1362 Petrarch's library was donated to Venice but this collection of manuscripts, ancient books, and personal letters was lost or dispersed).[2]

Like the British Library or the Library of Congress at later times, the Biblioteca Marciana profited from a law of 1603 that required that a copy be deposited in the Marciana of all books printed at Venice, the first such law.[citation needed] The Marciana was enriched by the transfer in the late eighteenth century of the collections accumulated in several monasteries, such as SS. Giovanni e Paolo in Venice and S. Giovanni di Verdara in Padua.

Great additions have been made to the collection from time to time:

With the fall of the Venetian Republic in 1797, the Marciana was enriched by the transfer of manuscripts and books from religious houses that were suppressed under the Napoleonic regime. In 1811 the library was moved to more spacious quarters in the Doge's Palace, where further collections entered:

In 1904 the collection was moved to Sansovino's Zecca (built 1537-47 as a mint). The Library has since expanded back into its adjacent original quarters and even into sections of the Procuratie Nuove facing Piazza San Marco.

Today, besides about a million printed books, the Biblioteca Marciana contains about 13,000 manuscripts and 2883 incunabula and 24,055 works printed between 1500 and 1600. There are many illuminated manuscripts. Among the irreplaceable treasures are unique scores of operas by Francesco Cavalli and sonatas by Domenico Scarlatti.