Doña Bárbara is a novel by Venezuelan author Rómulo Gallegos, first published in 1929.[1] It was described in 1974 as "possibly the most widely known Latin American novel".[2]

This regionalist novel deals with the confrontation between civilization and the barbaric aspects of the rural environment and its inhabitants. It is written in the third person and mixes vernacular language and regionalisms with literary narrative, making the main conflict more obvious and at the same time more tangible. This novel is considered a masterpiece of Venezuelan literature and a classic in Latin American literature. It establishes a psychological study of the people of the Venezuelan plains:[3] victims of unfortunate situations, but at the same time strong and courageous.

Gallegos took his first trip into the llanos of Apure, central Venezuela at Easter 1927, in order to gather material for the book he was writing,[4] staying on a ranch near San Fernando de Apure.[2] His previous book, La Trepadora, had been well-received.[4] He gathered many details of the local idiom, scenery, and daily life, and was inspired by the real people he encountered; Doña Bárbara herself is derived at least in part from the local landowner Doña Pancha.[4] Of the fifty place names mentioned, over half are easily identifiable in the area, and many more can be associated with existing sites with a little more effort.[4]

Within a month of returning to Caracas the first pages of the resulting novel, La Coronela, were being printed.[4] Yet dissatisfied with the title and the first printed pages, Gallegos called the printing off.[4] Gallegos then took his wife to Bologna, Italy, for an operation, and returned to the manuscript, making substantial revisions and coming up with a better title: Doña Bárbara.[4] The novel was then first published in Barcelona, Spain, in February 1929, by Spanish publisher Editorial Araluce.[5][6] It was substantially revised for its January 1930 second edition,[5] Gallegos adding five chapters amounting to 20,000 words, re-ordering chapters, and making various other changes. Gallegos later made further changes, until the author was finally satisfied with his work in 1954.[6]

The novel was published to worldwide acclaim, and despite Gallegos' research in the llanos taking just 8 days,[4] those familiar with the Venezuelan llanos were almost without exception convinced of its authenticity, convinced Gallegos was very familiar with them, if not born there.[4]

In the 1920s, Venezuela was under the dictatorial regime of Juan Vicente Gómez. His rule saw wealth from oil discovered in the early twentieth century, and he used it to develop modern infrastructure and end the era of caudillismo, fully and completely uniting the country for the first time. However his rule was also brutal and corrupt.

Santos Luzardo, a graduate lawyer of the Central University of Venezuela, returns to his father's land in the plains of Apure to sell the land but desists when he discovers that it is controlled by a despotic woman, Doña Bárbara, also known as the men's devourer; it is said that she uses seduction and pacts with demonic spirits to satisfy her whims and achieve power.

Santos Luzardo meets his cousin Lorenzo Barquero and discovers that he was a victim of the femme fatale, who left him bankrupt and a daughter, Marisela, whom she abandoned and who became quickly a vagrant. Lorenzo lives in poverty in a miserable house consumed by his own constant drunkenness.

Doña Bárbara falls in love with Santos Luzardo but he is charmed by Marisela, no longer living in abandonment and taken under Luzardo’s care.

The novel ends with the “defeat” of Doña Bárbara, who is able to obtain neither the land nor Luzardo’s heart, and finally departs to an unknown location. 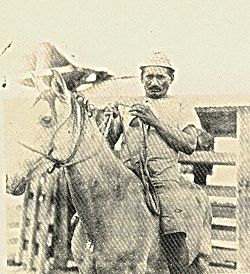 Gallegos based the character of Maria Nieves on a real man of the same name he knew during his travels in the plains. Maria Nieves photographed here in 1920 ready to direct the cattle across a river.