His professional playing career started with Chesterfield in 1967, before moving on to clubs including Rotherham United, Hartlepool United, Scunthorpe United, Aldershot, Barnsley, York City and Crewe Alexandra before retiring as a player in 1979.

Since becoming a manager in 1980 he has managed several English football league clubs including Huddersfield Town, Notts County, Plymouth Argyle, Crystal Palace and, most successfully, an eight-year spell at Sheffield United.

Warnock played for Chesterfield, Rotherham United, Hartlepool United, Scunthorpe United, Aldershot, Barnsley, York City and Crewe Alexandra, making a total of 326 league appearances in an eleven-year playing career. At Hartlepool he won the club's Player of the Season award in 1972.[2]

After being involved in Sunday League coaching his first full managerial job was with Northern Premier League side Gainsborough Trinity in 1981. Following this he managed Burton Albion and Scarborough. At Scarborough he and Paul Evans, his assistant, won the Football Conference title in 1987, making them the first team to win automatic promotion to the Football League following the abolition of the re-election system.

He had earlier spent time as a coach at Peterborough United, where he met Posh assistant boss Mick Jones, who would become his own long-time assistant. Warnock then became manager of Notts County with Jones as his assistant. Warnock's assistant at Scarborough Paul Evans and ex-Scarborough physio Dave Wilson also joined the backroom staff, and the pair achieved successive promotions to get County into the top flight in 1991 (with Warnock turning down lucrative offers to manage Chelsea and Sunderland during this time), before Warnock left in the 1992–93 after County's relegation had cost them a place in the new Premier League.[3]

In March 1993 he took over as 'consultant' at Torquay United, saving the club from relegation from the Football League. Warnock resumed his partnership with Jones, Evans and Wilson at Huddersfield Town, his appointment coming in July 1993.

Warnock was quick to inject new blood into the Terriers' side, snapping up 'keeper Steve Francis, Darren Bullock, Ronnie Jepson, Tom Cowan and Pat Scully during his first season, all of whom would go on to become mainstays in the 1994/95 promotion season. He also showed faith in Centre of Excellence products such as Chris Billy, Simon Baldry and Andy Booth – a player then struggling to make the breakthrough who would go on to become a club legend in modern times. Despite these acquisitions Town struggled for most of the 1993/94 season, their last at Leeds Road, and Warnock was quick to offload fan favourites Iwan Roberts, Iffy Onoura and Chris Marsden while introducing a more direct style of play. He also did not enjoy the best of relationships with cult hero Phil Starbuck.

The run to the final of the Autoglass Trophy coincided with an upturn in league form and a mass optimism further bolstered by the move to the new Alfred McAlpine Stadium for the 1994/95 season. Warnock's side won the Yorkshire Electricity Cup in late 1994. Warnock's side were genuine contenders for automatic promotion until falling away in the final few games to finish 5th (the final Play-Off spot that season owing to league re-structuring). They triumphed on penalties over 2nd-placed Brentford after two thrilling ties and went on to beat Bristol Rovers at Wembley.

He quit Huddersfield just days after their promotion, but made a swift and surprising return to management at Plymouth Argyle, which had just been relegated to Division Three.

In his first season as manager of Plymouth Argyle, Warnock took the club to Division Three play-off glory after finishing 4th in the league. The play-off semi-final was a memorable affair - Argyle played Colchester United and were 1–0 down from the 1st leg, but won 3–1 at Home Park in the 2nd leg. During this game, Warnock was sent off from the dug-out. Warnock responded to this by jumping into the crowd to watch the remainder of the match with the Argyle supporters.

The final was the first match that the club had played at Wembley Stadium. A header from Ronnie Mauge on 65 minutes gave Argyle a 1–0 win over Darlington and promotion to Division Two.

In February 1997, Warnock was surprisingly sacked as Argyle manager despite his popularity with the supporters.

Following his successful period as manager of Plymouth Argyle, Warnock rounded out the 1990s with Oldham Athletic and Bury. 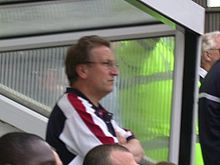 Warnock with the Blades

He was appointed as manager of his boyhood club Sheffield United on 2 December 1999. In 2002–03, Warnock led Sheffield United to the semi-finals of the FA Cup and League Cup only to lose to Liverpool and Arsenal respectively, as well as the First Division play-off final, with the Blades beaten 3–0 by Wolverhampton Wanderers. This was the first time in his management career that he had lost a play-off contest, as he had achieved four promotions via the playoffs in the 1990s.

In 2005 Jones resumed the partnership by taking up the assistant's post at Bramall Lane, and at the end of the 2005–06 season the club were promoted to the Premiership as runners-up in The Championship.

The Blades performed well in their expected relegation battle, and for a long time looked to be heading for survival. However a turning point in the season occurred with victories for both West Ham and Wigan on the final day of the season, condemning Warnock's side to relegation. Warnock claimed in his autobiography that minutes after the final game of the season, actor and Blades fan Sean Bean burst into his office, blaming Warnock for the team's relegation in a "foul-mouthed tirade" while Warnock's wife and daughter were present. Bean denied this, calling Warnock "bitter" and "hypocritical", and arguing that he would never use such language in front of another man's wife and children. Warnock resigned from the club following relegation to take some time out of football.

A major factor that caused Sheffield United's relegation was that Fulham beat Liverpool in the penultimate game of the season. Liverpool rested many first team players (due to the fact Liverpool had a Champions League final to look forward to) and consequently lost 1–0. Liverpool started the day in fourth place and finished the league a week later in third place.

Warnock was frustrated that Liverpool played a weaker team, because it did not give the teams in the relegation battle an equal chance of survival.

He spoke to Milan Mandarić about the vacant managerial role at Leicester City in the summer, but was never handed the job.[4] Simon Jordan spoke to Warnock about taking over at Crystal Palace following the sacking of Peter Taylor and, after initially not being keen over the job, he returned to football management with Palace on 11 October 2007.[5][6] Having his personal friend Simon Jordan as Owner and Chairman was certainly a help in him getting the job. Jones returned from his own sabbatical to join Warnock's team as assistant. Under Warnock and Jones Palace made a massive turn-around, moving from relegation battlers to promotion contenders in the space of six months, with Warnock's use of youngsters a major factor in the improved performances and results. Palace made the play-offs in the end, but were beaten at the semi-final stage by Bristol City, who went on to lose to Hull City in the final.

Warnock stayed on for the 2008–09 season, but on taking the job a year earlier he had made it clear that the Crystal Palace job would be his last managerial role in football, with the club's finances beginning the take a turn for the worse. The 2009–10 season saw Palace perform well despite being heavily restricted by the club's poor financial position, which resulted in the club being placed in administration late in January. A 10-point deduction was imposed by the Football League for this.[7] Crystal Palace's administrator commented that Warnock was 'let go' after telling the administrator he did not have the stomach for the fight to save the club.[8]

On 1 March 2010 Warnock joined Queens Park Rangers as manager on a three-and-a-half year deal after agreeing compensation with Crystal Palace.[9] His first match in charge was an emphatic 3–1 home win against West Bromwich Albion.

He helped QPR comfortably avoid relegation in 2009-10 – including a 2–0 win against former club Crystal Palace at Selhurst Park. Warnock was awarded Manager of the Month for August 2010. Using a new 4–2–3–1 formation built around playmaker Adel Taarabt who went on win the Football League Championship Player of the Year 2011. QPR topped the table for the majority of the 2010-11 season and On 30 April 2011 were promoted as Championship champions after a 2-0 win over Watford.[10]

Warnock, who is qualified as a referee,[11] but has never officiated at the very top level, is renowned for his outbursts, which some see as controversial

Warnock has been a lifelong supporter of Sheffield United. He is married to Sharon and has four children, Natalie, James, Amy and William.[43] As of 2010[update], he lived in Richmond, London[44] and had a home in Cornwall.[45]

He has published two books, Neil Warnock's Wembley Way: The Manager's Inside Story with Rick Cowdery in 1996, which recalls Plymouth Argyle's Third Division play-off final win in the same year, and Made in Sheffield: Neil Warnock – My Story, his autobiography, published in 2007.

Manager of the month