The Parallax Propeller microcontroller, Propeller Assembly language, and Spin interpreter were designed by one person, Parallax's co-founder and president Chip Gracey. The Spin Programming language and "Propeller Tool" integrated development environment were designed by Chip Gracey and Parallax's software engineer Jeff Martin. The Propeller is known for being easy to program.[2]

Each of the eight 32-bit cores (called a cog) has a CPU which has access to 512 32-bit long words (2 KB) of instructions and data. Self-modifying code is possible and is used internally, for example by an instruction that is used to create a subroutine call/return mechanism without the need for a stack. Access to shared memory (32 KB RAM; 32 KB ROM) is controlled in round-robin fashion by an internal bus controller called the hub. Each cog also has access to two dedicated hardware counters and two special "video registers" for use in generating PAL, NTSC, VGA, servo-control, or other timing signals.[3]

The Propeller can be clocked using either an internal, on-chip oscillator (providing a lower total parts count, but sacrificing some accuracy and thermal stability) or an external crystal or resonator (providing higher maximum speed with greater accuracy at an increased total cost). Only the external oscillator may be run through an on-chip PLL clock multiplier, which may be set at 1x, 2x, 4x, 8x, or 16x.

Both the on-board oscillator frequency (if used) and the PLL multiplier value may be changed at run-time. If used correctly, this can improve power efficiency; for example, the PLL multiplier can be decreased before a long "no operation" wait required for timing purposes, then increased afterwards, causing the processor to use less power. However, the utility of this technique is limited to situations where no other cog is executing timing-dependent code (or is carefully designed to cope with the change), since the effective clock rate is common to all cogs.

The effective clock rate ranges from 32 kHz up to 80 MHz (with the exact values available for dynamic control dependent on the configuration used, as described above). When running at 80 MHz, the proprietary interpreted Spin programming language executes approximately 80,000 instruction-tokens per second on each core, giving 8 times 80,000 for 640,000 high level instructions per second. Most machine-language instructions take 4 clock-cycles to execute, resulting in 20 MIPS per cog, or 160 MIPS in total for an 8-cog Propeller.

In addition to lowering the clock rate to that actually required, power consumption can be reduced by turning off cogs (which then use very little power), and by reconfiguring I/O pins which are not needed, or can be safely placed in a high-impedance state ("tristated"), as inputs. Pins can be reconfigured dynamically, but again, the change applies to all cogs, so synchronization is important for certain designs. (Some protection is available for situations where one core attempts to use a pin as an output while another attempts to use it as an input; this is explained in Parallax's technical reference manual.)

Each cog has access to some dedicated counter/timer hardware, and a special timing signal generator intended to simplify the design of video output stages, such as composite PAL or NTSC displays (including modulation for broadcast) and VGA monitors. Parallax thus makes sample code available which can generate video signals (text and somewhat low-resolution graphics) using a minimum parts count consisting of the Propeller, a crystal oscillator, and a few resistors to form a crude DAC. The frequency of the oscillator is important, as the correction ability of the video timing hardware is limited to the clock rate. It is possible to use multiple cogs in parallel to generate a single video signal. More generally, the timing hardware can be used to implement various pulse-width modulated (PWM) timing signals.

In addition to the Spin interpreter and a bootloader, the built-in ROM provides some data which may be useful for certain sound, video, or mathematical applications:

The math extensions are intended to help compensate for the lack of a floating-point unit as well as more primitive missing operations, such as multiplication and division (this is masked in Spin but is a limitation for assembly language routines). The Propeller is a 32-bit processor, however, and these tables may not have sufficient accuracy for higher-precision applications.

Spin code is written on the Propeller Tool, a GUI oriented software development platform written for Windows XP.[5] This compiler converts the Spin code into bytecodes that can be loaded (with the same tool) into the main 32 KB RAM, and optionally into the serial boot FLASH EEPROM, of the Propeller chip. After booting the propeller a bytecode interpreter is copied from the built in ROM into the 2 KB RAM of the primary COG. This COG will then start interpreting the bytecodes in the main 32 KB RAM. More than one copy of the bytecode interpreter can run in other COGs, so several Spin code threads can run simultaneously. Within a Spin code program, assembler code program(s) can be "inline" inserted. These assembler program(s) will then run on their own COG's.

Like Python, Spin uses indentation/whitespace, rather than curly braces or keywords, to delimit blocks.

The Propeller's interpreter for its proprietary multi-threaded SPIN computer language is a byte code interpreter. This interpreter decodes strings of instructions, one instruction per byte, from user code which has been edited, compiled, and loaded onto the Propeller from within a purpose-specific IDE. This IDE, which Parallax simply calls "The Propeller tool", is intended for use under the Windows operating system.

The SPIN language is a high level language. Because it is interpreted in software, it runs slower than pure Propeller assembly but can be more space-efficient (Propeller assembly opcodes are 32 bits long; SPIN directives are 8 bits long, which may be followed by a number of 8-bit bytes to specify how that directive operates). SPIN also allows users to avoid significant memory segmentation issues that must be considered for assembly code.

Mixing SPIN and assembly code is straightforward; SPIN is more appropriate for high-level logic, while assembly routines may be required for I/O routines that require exact timing.

At startup, a copy of the byte code interpreter (less than 2 KB in size), will be copied into the dedicated RAM of a cog and will then start interpreting byte code in the main 32 KB RAM. Additional cogs can be started from that point, loading a separate copy of the interpreter into the new cog's dedicated RAM (a total of eight interpreter threads can, therefore, run simultaneously). Notably, this means that at least a minimal amount of startup code must be SPIN code, for all Propeller applications.

The syntax of Spin can be broken down into blocks. The blocks are as following.

reboot: causes the microcontroller to reboot

waitcnt: wait for the system counter to equal or exceed a specified value

coginit: starts a processor on a new task

An example program, (as it would appear in the "Propeller Tool" editor) which outputs the current system counter every 3,000,000 cycles, then is shut down by another cog after 40,000,000 cycles:

The Parallax Propeller is gradually accumulating software libraries which give it similar functionality to Parallax's older BASIC Stamp product; however there is no uniform list of which PBASIC facilities now have Spin equivalents.

The initial version of the chip (called the P8X32) provides one 32 bit port in a 40-pin 0.6" DIP, 44-pin LQFP, or QFN package. Of the 40 available pins, 32 are used for I/O, four for power and ground pins, two for an external crystal (if used), one to enable brownout-detection, and one for reset.

All 8 cores can access the 32-bit port (designated "A"; there is currently no "B") simultaneously. A special control mechanism is used to avoid I/O conflicts if one core attempts to use an I/O pin as an output while another tries to use it as input. Any of these pins can be used for the timing or pulse-width modulation output techniques described above.

Parallax has stated that it expects later versions of the Propeller to offer more I/O pins and/or more memory.[6]

The screen capture displayed here was made using a software "virtual display driver" that sends the pixel data over a serial link to a PC.[8]

Dedicated cores instead of interrupts

To handle an external signal promptly on the Propeller, any one of the 32 I/O lines is configured as an input. A cog is then configured to wait for a transition (either positive or negative edge) on that input using one of the two counter circuits available to each cog. While waiting for the signal, the cog operates in low-power mode, essentially sleeping. Extending this technique, a Propeller can be set up to respond to eight independent "interrupt" lines with essentially zero handling delay. Alternately, a single line can be used to signal the "interrupt" and then additional input lines can be read to determine the nature of the event. The code running in the other cores is not affected by the interrupt handling cog. Unlike a traditional multitasking single-processor interrupt architecture, the signal response timing remains predictable,[10] and indeed using the term "interrupt" in this context can cause confusion, since this functionality can be more properly thought of as polling with a zero loop time.

On power up, brownout detection, software reset, or external hardware reset, the Propeller will load a machine-code boot routine from the internal ROM into the RAM of its first (primary) cog and execute it. This code emulates an I2C interface in software, temporarily using two I/O pins for the needed serial clock and data signals to load user code from an external I2C EEPROM.

Simultaneously, it emulates a serial port, using two other I/O pins that can be used to upload software directly to RAM (and optionally to the external EEPROM). If the Propeller does not see any commands from the serial port, it will load the user program (the entry code of which must be written in SPIN, as described above) from the serial EEPROM into the main 32K RAM. After that it will load the SPIN interpreter from its built-in ROM into the dedicated RAM of its first cog, thereby overwriting most of the bootloader.

Regardless of how the user program is loaded, execution starts by interpreting initial user bytecode with the SPIN interpreter running in the primary cog. After this initial SPIN code runs, the application can turn on any unused cog to start a new thread, and/or start assembler code routines.

The Propeller boots from an external serial EEPROM; once the boot sequence completes, this device may be accessed as an external peripheral.[11]

There is also a C compiler available from ImageCraft, the ICCV7 for Propeller. It has been marked to End Of Life state.[12] It supports the 32K Large Memory Model, to bypass the 2K limitation per cog, and is typically 5 to 10 times faster than standard SPIN code.[13] A free ANSI C compiler called Catalina is also available.[14] It is based on LCC.

There is also a movement in place to put the JVM on Propeller. A compiler, debugger, and emulator are being developed.[15] 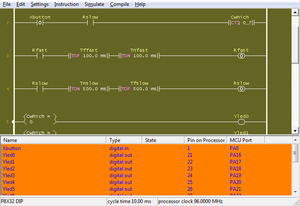 PICoPLC supports output to Propeller processor. The program is created in a GUI ladder logic editor and resulting code is emitted as SPIN source. PICoPLC also supports P8X32 with create-simulate-run feature. No restrictions on target hardware as the oscillator frequency and IO pins are freely configurable in the ladder editor. PICoPLC is free to use and distribute.

Parallax is currently building a new Propeller[16] with cogs that each will run at about 160 MIPS, whereas the current Propeller's cogs each run at around 20 MIPS. The improved performance would result from a maximum clock speed increase to 160 MHz (from 80 MHz) and an architecture that pipelines instructions, achieving an average execution of nearly one instruction per clock cycle (approximately a four-fold increase).[6]