Teresina is the capital and most populous municipality in the Brazilian state of Piauí. It is located in North-central Piauí 366 km from the coast.It is therefore, the only capital in the Northeast that is not located on the shores of the Atlantic Ocean. With 814 439 inhabitants, it is the 19th largest city in Brazil, and the 15th largest state capital in the country. Together with Timon, in the nearby state of Maranhão the conurbation has a population of about 953,172 inhabitants, and the entire metropolitan region of Teresina has over 1,135,920 inhabitants. The only natural barrier that separates Teresina from Timon is the Parnaíba river, of the largest in the Northeast. Teresina is the second capital with the best quality of life in the North-Northeast according to FIRJAN. According to IPEA it is the third safest capital of Brazil (second only to Natal / RN, and Palmas / TO) . Teresina is also the third city with the most lightning strikes in the world. For this reason, the region receives the curious name of "Chapada do Corisco".

Its motto is the phrase "Omnia in Charitatis"which means, in English, "All for charity. " The city is the birthplace of Torquato Neto, who belonged to the Tropicalismo movement, and Carlos Castelo Branco, a political columnist for the Jornal do Brasil. 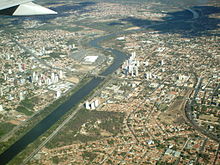 Aerial view of the city. Notice the Poti River through the city.

With a latitude of 5 ° 5'20 south and longitude 42 ° 48'07 West, located near the border with Maranhão, west of the state, at an altitude of 72 meters on average. The city is separated from the city of Timon (Maranhão) by Parnaíba. The central part of town is situated between the River and Rio Parnaiba Poti, belonging to the catchment of Emotions. For this feature, some people call the capital of Piauí in northeastern Mesopotamia. In the north of town, the two rivers come together and transform themselves into a single bed into the Atlantic Ocean. In place is an environmental park, with observatories, so the landscape can be appreciated up close. There you can also find some ceramic pieces from the rich handicrafts of Teresina and a monument that illustrates the legend of Cuia Head, a character from local folklore. Teresina is bounded by two rivers: the Rio Poti and Parnaíba. The two also join forces and flows directly into the ocean. Teresina is the largest city in northeastern territorial extension, with 1755.698 km ².

Teresina has a tropical climate with two seasons semiúmido characteristics: the rainy season (which occur in summer and autumn) and the dry season (which occurs in winter and spring). From January to May, due to the rains, the weather is cold and wet (likely to occur when there is fog in the morning), from June to August the climate gets really dry with relatively cool nights, September to December the weather becomes more hot and stuffy, and may begin to occur a few rain showers from November.

A peculiar feature of the rains in the city is because they are fast and very intense, with strong winds, large force of water and lightning striking. The occurrence of lightning is also very common, so where Teresina is located is known as the Chapada do Corisco. The annual rainfall stands at around 1,500 mm.

Hot most of the year, Teresina has an average temperature around 27 °C, with minimum of 20 °C and maximum 35 °C. The lowest ever recorded in Teresina was 14 °C in the month of February, as the warmer months, the maximum can reach 40 °C, especially in October. These fluctuations are mitigated by the contribution of the winds that make the atmosphere more pleasant. Air quality is considered good in Teresina, except in the driest period, when the relative humidity drops, and there are occurrences of fires.

Located in a transition zone between the northeast and the Amazon (Mid-North), Teresina is surrounded by woods of coca crops, savannas and cerradões where you can see many carnauba wax, babassu, buriti, jatoba, shin, ipe, and many other trees medium. In the region of Teresina there are also remnants of Atlantic Forest, which gives the landscape a rich shrub cover and dense. Teresina has more green areas than recommended by the UN, and reconciles your progress with respect to the environment. This ensures Teresina to the title of 'Green City'. 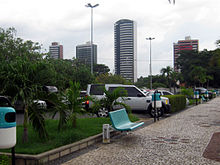 The Gross Domestic Product of Teresina represents about 40% of GDP in the state of Piaui. In industry, there is the textile and garment industry, which exports to other regions and generates about ten thousand jobs. There are also manufacturers bicycles, drink industries, pharmaceuticals, chemicals, furniture and ceramics, among others. The building deserves to be a fast-growing sector due to the verticality of the city over the past 15 years. Teresina also has one of the only shopping mall concept of Open Country Mall.

People from various parts of Brazil and the world arrive in Teresina to conduct business, conferences, meetings, fairs, events, and seeking medical care quality and diverse, than those who arrive in Teresina to discover the beauties across the state Piaui, this causes people to take advantage to know the attractions of the capital, thus generating tourism in the city. Teresina has the privilege of being well served by spaces for the development of educational and cultural events, because in addition to achievements have facilities for fairs, sporting events, exhibit, among others, has 26 auditoriums. In the general context, the auditoriums offer satisfactory conditions of comfort and convenience. The hotels in Teresina and consists of 22 units, totaling 575 apartments and 1,129 beds.

Teresina has a complete network of health services, consisting of several hospitals, clinics, polyclinics, mixed units, centers and clinics belonging to the State, county and private initiative, which makes the capital of Piauí an important center medical care in various specialties, and best of the Northeast.

For these features, combined with its geographical location, for Teresina moving people from several states of North and Northeast in search of health services, up to 40% of medical care in public hospitals in the capital.

This is a growing trend in the city, not only because of hosting a medical school that is among the most reputable of the country but also for the excellent quality of services provided by health professionals. In Teresina, today, are made cardiac surgery, organ transplants, neurological surgery, among others.

Thanks to good location of the capital of Piauí, Teresina became The Center for Medicine in the Northeast. In recent years the capital has been highlighted by nationwide, to receive more (percentage) people from other regions for treatment in hospitals.[citation needed]

And investment in the area are enormous, ultimately, the clinics have nearly doubled the number. According to statistics from City Hall, 634 are health institutions, eight hospitals, 181 clinics and 170 clinics, employing fifteen thousand people.

Moreover, there is a significant number of small "pension" that host people from the interior of Piauí and neighboring states in search of health services in Teresina.

Portuguese is the official national language, and thus the primary language taught in schools. But English and Spanish are part of the official high school curriculum.

Teresina/Senador Petrônio Portella Airport. Opened on September 30, 1967, Teresina Airport has been administered by Infraero since February 3, 1975. Teresina Airport is located four kilometers from downtown, roughly a ten-minute trip by car. It is 67 meters above sea level and the local temperature averages 30.9°C (87.62°F). 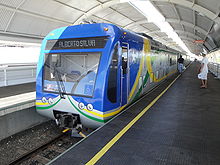 Created on August 15, 1989, in order to deploy a high capacity transport for the urban agglomeration of Greater Teresina, Teresina Metro has become one of the most beautiful and modern in the country. The trains are new and each has the capacity to carry 800 people. The average flow of movement can reach 30 thousand passengers per day in 2010, and each train has a central air-conditioning system that ensures comfort and convenience to passengers. Teresina Metro now has nine stations, and the projected deployment of two more in 2010. One will be in the neighborhood and the other in St. John Piçarra. There are plans to further extend the subway to meet a growing number of people.

Lagoas do Norte Project - aims to transform regions located near the lakes in the northern area of the municipality.

Vila-district - has its roots in a formulation made ​​by the city of Teresina, in January 1997 and over the years has established a clear priority for investment in social infrastructure, sometimes concentrating efforts on decentralizing or actions directed to outlying areas. With this accumulated experience and confidence in dealing with the issue, another project approved by UNESCO.

Revitalization Center - This is another project that seeks the restoration of streets and old buildings and areas of Teresina taken by vendors, in addition to the revitalization of squares.

Teresina Polo Health - Its goal is the development of the hospital and other health care establishments in the last sixty years, accompanied by the growth of technological engineering healthcare, human resources at all levels and professions, or higher, technical, and administrative assistant. 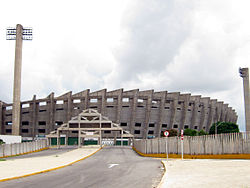 Lindolfo Miller Stadium: The "Lindolfinho, " is known as the Municipal Stadium, opened in 1944. Since then, the stadium has just passed a reform in 1964. With the new restoration completed in 2008, the stadium has won 1,868 plastic seats in the stands, in addition to 768 seats within the standards of the best Brazilian stadiums. An electronic scoreboard 15 square meters has also been installed in the stadium which now offers good accommodation for 6,000 spectators. Football teams Teresina: Flamengo-PI, PI-River, Tiradentes and Piauí-PI CE Rugby has grown a lot in the city harboring three times today: Teresina Rugby Club, Lions Rugby Club, Rugby Titans Clash.