Chesterfield's most notable successes came in the 1990s, when they won the Division Three playoff final at Wembley in 1995 and reached the FA Cup semi-finals two years later. They were the first club from outside the top two divisions to reach this stage of the competition since 1984 (Plymouth Argyle). On 7 May 2011 Chesterfield beat Gillingham to secure the League 2 title.

Chesterfield play their home games at the 10,300 capacity B2net Stadium, having moved from their old home Saltergate, for the 2010-11 season.

John Sheridan is the current manager having been given a three year contract in June 2009, along with his assistant Tommy Wright. 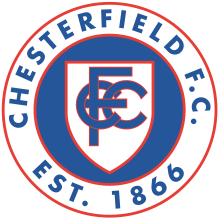 The first Chesterfield Football Club was formed in the late 1860s, as an offshoot of Chesterfield Cricket Club. The exact date of its foundation is disputed: many sources list the year as 1866, but the current club's official site states that there is no evidence for its existence prior to October 1867, although other club memorabilia and literature carries 1866 as the year of formation. The cricket and football clubs moved to the Recreation Ground at Saltergate in 1871, the same year that they became separate entities. However, a souring of the relationship between the two led to the closure of the football club a decade later, in 1881, when it found itself homeless.[1][2]

Three years later a new Chesterfield Football Club was formed, again making its home at Saltergate.[1] After changing its name to Chesterfield Town, the club turned professional in 1891 and won several local trophies in the following two seasons, entering the FA Cup for the first time in 1892. Chesterfield joined the Midland League in 1896, and successfully applied for a place in the Second Division of the Football League at the start of the 1899-1900 season, finishing seventh. After finishing bottom of the League three years in a row, the club failed to gain re-election to the League in 1909, returning to the Midland League.[3]

In 1915 Chesterfield Town was put into voluntary liquidation and a new club with the same name formed. It lasted only two years before its management and players were suspended by the FA for illegal payments, and the club shut down. Chesterfield Borough Council formed a new club in April 1919, Chesterfield Municipal F.C., to fill the gap. It was run by the council itself, but the FA forced the club to become independent in December 1920. The club's name was changed to Chesterfield F.C. as a result of the ownership change.[1]

After the war the club achieved their best League position, finishing fourth in the Second Division in 1946-47. However, the sale of several players at the end of the season reduced their overall quality, and Chesterfield were relegated at the end of the 1950-51 season. They were placed in the Third Division on its formation at the start of the 1958-59 season; future England international goalkeeper Gordon Banks made his professional debut in a Third Division game in November 1958, but was sold to Leicester City for a then-club record £7,000 fee at the end of the season. In 1961 Chesterfield were relegated to the Fourth Division for the first time.[3]

Chesterfield spent eight seasons in the Fourth Division, earning promotion as champions in 1969-70 under manager Jimmy McGuigan. The Anglo-Scottish Cup was won in 1981. The club was relegated in 1983-84, and won the Fourth Division title the following season. Financial difficulties forced Chesterfield Borough Council to bail out the club in 1985 and the club's training ground to be sold. Relegation followed in 1988-89; Chesterfield reached the play-off competition a year later, but were beaten by Cambridge United in the play-off final. The arrival of John Duncan as manager in 1993 was followed in the 1994-95 season by play-off victories over Mansfield Town and Bury to earn promotion to the redesignated Second Division.[3]

The 1996-97 season saw Chesterfield beat four clubs including Premier League side Nottingham Forest to reach the semi-final of the FA Cup for the first time. The semi-final match against Middlesbrough was drawn 3-3 after extra time; Chesterfield lost the replay 3-0.[4]

The club were relegated to the Third Division in 2000 following a run of 21 games without a win, and chairman Norton Lea was replaced by Darren Brown. The following year, Chesterfield were deducted nine points for financial irregularities after Brown attempted to avoid paying Chester City the fee agreed by the FA for Luke Beckett. Amid mounting evidence of fraud, he relinquished control of the club in March 2001 and ownership passed to a hastily organised fans' group, the Chesterfield Football Supporters Society. Massive debts run up by Brown forced the club into administration, but the team still secured the division's final automatic promotion place. (Brown was later sentenced to four years in prison following a Serious Fraud Office investigation that led to charges including false accounting, furnishing false information and theft).[5]

On 22 April 2011 Chesterfield were promoted to League One after a 0-0 draw between Wycombe Wanderers and Torquay United confirmed that the former could not catch Chesterfield, who had been top of League Two since the 16th October 2010.[7] On the 7th May 2011 Chesterfield FC were crowned League 2 champions following a 3-1 victory against Gillingham.[8]