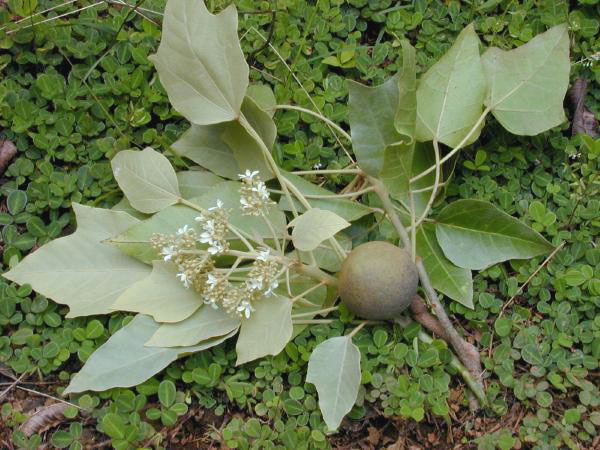 The Candlenut ("Aleurites moluccana"), is a in the family , also known as Candleberry, Indian walnut, Kemiri, Varnish tree or Kukui nut tree.

Its native range is impossible to establish precisely because of early spread by humans, and the tree is now widely distributed in the New and Old World tropics. It grows to a height of 15-25 m, with wide spreading or pendulous branches. The leaves are pale green, simple and ovate, or trilobed or rarely 5-lobed, with an acute apex, 10–20 cm long. The nut is round, 4–6 cm in diameter; the inside has a very hard seed coat and a high oil content, which allows its use as a candle (see below), hence its name.

*The candle nut is similar (though "rougher") in flavor and texture to the nut, which has a similarly high oil content. It is mildly toxic when raw.Fact|date=May 2008
*The nut is often used cooked in and Malaysian, where it is called "kemiri" in Indonesian or "buah keras" in Malay. In Java of , it is used to make a thick sauce which is eaten with vegetables and rice.
*Several parts of the plant have been used in traditional medicine in most of the areas where it is native. The oil is an irritant and and sometimes used like . It is also used as a hair stimulant or additive to hair treatment systems. The seed kernels have a effect. In its has been used on s. In , pounded seeds, burned with charcoal, are applied around the navel for . In Malaya, the pulped kernels or boiled leaves are used in poultices for headache, fevers, ulcers, swollen joints, and . In Java, the bark is used for bloody or .
*In ancient Hawaiokinai, the nuts, named "kukui" were burned to provide light. The nuts were strung in a row on a palm leaf midrib, lit one end, and burned one by one every 15 minutes or so. This led to their use as a measure of time. One could instruct someone to return home before the second nut burned out.
*In , still nowadays, ripe nuts, named "tuitui" are pounded into a paste, "tukilamulamu", used as soap or shampoo.
*Candle nuts are also roasted and mixed into a paste with salt to form a Hawaiian condiment known as "inamona". Inamona is a key ingredient in traditional Hawaiian "poke". It's the Hawaiian state tree. [ [http://www.50states.com/tree/hawaii.htm State tree of Hawaii] ]
* Dead wood of candlenut is eaten by a larva of a called " fairmairei". This larva is eaten by some people.

Modern cultivation is mostly for the oil. In plantations, each tree will produce 30–80 kg of nuts, and the nuts yield 15 to 20% of their weight in oil. Most of the oil is used locally rather than figuring in international trade.

In Hawaiokinai the Candlenut tree is a symbol of enlightenment, protection and peace. Candlenut was considered to be the body form of , the pig god. One of the legends told about a woman who, despite her best efforts to please her husband, was routinely beaten. Finally, the husband beat her to death and buried her under a kukui tree. Being a kind and just woman, she was given new life, and the husband was eventually killed.Fact|date=May 2008

* [http://www.hear.org/pier/species/aleurites_moluccana.htm Pacific Island Ecosystems at Risk factsheet]
* [http://www.oilsofaloha.com Oils of Aloha] — A Hawaii company producing kukui and macadamia nut products, their website plays host to much information about both nuts.