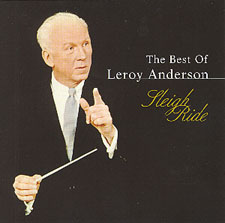 Leroy Anderson ( – ) was an American of short, light concert pieces, many of which were introduced by the under the direction of . John Williams described him as "one of the great American masters of light orchestral music."

Born in to Swedish parents, Leroy Anderson was given his first piano lessons by his mother, who was an organist. He continued studying piano with Henry Gideon at the , and he also took double bass lessons from in Boston. In 1926 Anderson entered , where he studied theory with Walter Spalding, counterpoint with Edward Ballantine, harmony with and composition with . He graduated with a Bachelor of Arts degree in 1929 and Master of Arts in 1930.

In 1942 Leroy Anderson joined the , and was assigned to as a translator and interpreter. Later in 1945 he was assigned to the as Chief of the Scandinavian Desk of Military Intelligence. But his duties did not prevent him from composing, and in 1945 he wrote "" [ [http://www.pbs.org/sleighride/Video&Music/Compositions_SClock.htm PBS - Compositions - Syncopated Clock] ] and "Promenade". Anderson was a reserve officer and was recalled to active duty for the Korean War. In 1951 Anderson wrote his first hit, "", earning a Golden Disc and the No. 1 spot on the Billboard charts.

His pieces and his recordings during the fifties conducting a studio orchestra were immense commercial successes. "Blue Tango" was the first instrumental recording ever to sell one million copies. His most famous pieces are probably "" and "", both of which are instantly recognizable to millions of people. In 1950, in selected "Syncopated Clock" as the theme song for "The Late Show", the WCBS late-night movie. added words to "Syncopated Clock", and later wrote lyrics for other Anderson tunes, including "Sleigh Ride", which was not written as a Christmas piece, but as a work that describes a winter event. Anderson started the work during a heat wave in August 1946. [ [http://www.pbs.org/sleighride/Video&Music/Compositions_SRide.htm PBS - Compositions - Sleigh Ride ] ] From 1952 to 1961, Anderson's composition "Plink, Plank, Plunk!" was used as the theme for the CBS panel show "."

Anderson's musical style, heavily influenced by and folk music of various lands, employs creative instrumental effects and occasionally makes use of sound-generating items such as typewriters and sandpaper. ( also uses a typewriter in his orchestral music, in "", but with a decidedly less humorous effect.)

Anderson wrote his Piano Concerto in C in 1953 but withdrew it, feeling that it had weak spots. In 1988 the Anderson family decided to publish the work. and the released the first recording of this work; three other recordings have since been released.

In 1958 composed the music for the Broadway show "Goldilocks", which earned two Tony awards but did not achieve commercial success. Anderson never wrote another musical, preferring instead to continue writing orchestral miniatures. His pieces, including "", "", and "" are performed by orchestras and bands ranging from school groups to professional organizations.

Anderson would occasionally appear on the Boston Pops regular concerts on PBS to conduct his own music while Fiedler would sit on the sidelines. For "The Typewriter" Fiedler would don a green eyeshade, roll up his sleeves, and mime working on an old typewriter while the orchestra played.

For his contribution to the recording industry, Leroy Anderson has a star on the at 1620 Vine Street. He was posthumously inducted into the in 1988 and his music continues to be a staple of "pops" orchestra repertoire.

In 2006, one of his piano works, "Forgotten Dreams", became the background for a British TV advertisement for mobile phone company '3'. Previously, 's recording of the song had been the closing theme for 's "" for much of the 1970s.

His first name was pronounced the classical way, with the stress on the second syllable; "Luh-ROY" rather than the now prevalent pronunciation of that name, "LEE-roy".

Scottish Suite (1954)
*The Bluebells of Scotland
*Turn Ye To Me