Cyril Henry Hoskin (8 April 1910 – 25 January 1981), more popularly known as Tuesday Lobsang Rampa, was a writer who claimed to have been a lama in Tibet before spending the second part of his life in the body of a British man. Hoskin described himself as the "host" of Tuesday Lobsang Rampa. The name Tuesday relates to a claim in The Third Eye that Tibetans are named after the day of the week on which they were born.

In November 1956 a book called The Third Eye was published in the United Kingdom. It was written by a man named Tuesday Lobsang Rampa and purported to relate his experiences while growing up in a monastery in Tibet after being sent there at the age of seven. The title of the book is derived from an operation, similar to trepanation, that Rampa claimed he had, in which a small hole was drilled into his forehead to arouse the third eye and allow stronger powers of clairvoyance. The book describes the operation as follows:

The instrument penetrated the bone. A very hard, clean sliver of wood had been treated by fire and herbs and was slid down so that it just entered the hole in my head. I felt a stinging, tickling sensation apparently in the bridge of my nose. It subsided and I became aware of subtle scents which I could not identify. Suddenly there was a blinding flash. For a moment the pain was intense. It diminished, died and was replaced by spirals of colour. As the projecting sliver was being bound into place so that it could not move, the Lama Mingyar Dondup turned to me and said:" You are now one of us, Lobsang. For the rest of your life you will see people as they are and not as they pretend to be."

During the story, Rampa meets yetis and, at the end of the book, he encounters a mummified body that was him in an earlier incarnation. He also takes part in an initiation ceremony in which he learns that during its early history the Earth was struck by another planet, causing Tibet to become the mountain kingdom that it is today. 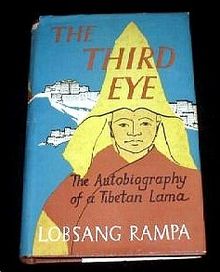 The manuscript of The Third Eye had been turned down by several leading British publishers before being accepted by Secker and Warburg for an advance of £800. Prior to the book's publication Fredric Warburg met "Doctor Carl Kuon Suo" - before he changed his name to Dr Tuesday Lobsang Rampa - and was intrigued by his personality. Warburg sent the manuscript of the unpublished book to a number of scholars, several of whom expressed doubts about its authenticity. Nevertheless, the book was published in November 1956 and soon became a global bestseller. The Times Literary Supplement said of the book: "It comes near to being a work of art."

Controversy over authorship of The Third Eye

Explorer and Tibetologist Heinrich Harrer was unconvinced about the book's origins and hired a private detective from Liverpool named Clifford Burgess to investigate Rampa. The findings of Burgess' investigation were published in the Daily Mail in February 1958. It was reported that the author of the book was a man named Cyril Henry Hoskin, who had been born in Plympton, Devon in 1910 and was the son of a plumber. Hoskin had never been to Tibet and spoke no Tibetan. In 1948, he had legally changed his name to Carl Kuon Suo before adopting the name Lobsang Rampa. An obituary of Fra Andrew Bertie, Grand Master of the Sovereign Military Order of Malta, claims that he was involved in unmasking Lobsang Rampa as a West Country plumber.[1]

Rampa was tracked by the British press to Howth, Ireland and confronted with these allegations. He did not deny that he had been born as Cyril Hoskin, but claimed that his body was now occupied by the spirit of Lobsang Rampa. According to the account given in his third book, The Rampa Story, he had fallen out of a fir tree in his garden in Thames Ditton, Surrey while attempting to photograph an owl. He was concussed and on regaining his senses had seen a Buddhist monk in saffron robes walking towards him. The monk spoke to him about Rampa taking over his body and Hoskin agreed, saying that he was dissatisfied with his current life. When Rampa's original body became too worn out to continue, he took over Hoskin's body in a process of transmigration of the soul.

Rampa maintained for the rest of his life that The Third Eye was a true story. In the foreword to the 1964 edition of the book, he wrote:

I am Tuesday Lobsang Rampa, that is my only name, now my legal name, and I answer to no other.

Lobsang Rampa went on to write another 18 books containing a mixture of religious and occult material. One of the books, Living With The Lama, was described as being dictated to Rampa by his pet Siamese cat, Mrs Fifi Greywhiskers. Faced with repeated accusations from the British press that he was a charlatan and a con artist, Rampa went to live in Canada in the 1960s. He and his wife, San Ra'ab, became Canadian citizens in 1973, along with Sheelagh Rouse (Buttercup) who was his secretary and regarded by Rampa as his adopted daughter. 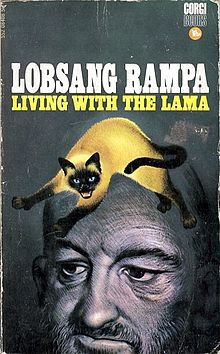 Rampa claimed that his 1964 book, Living with the Lama, was dictated to him by his cat

My Visit to Venus is based on work which Lobsang Rampa did not approve for publication and was published some years after it was written. It describes how Rampa meets the masters of several planets during a trip in a spaceship. The original manuscript was written by Rampa, but this book was not. It was created by Gray Barker who used Rampa's name and manuscript without his permission. Read "Feeding the Flame" page 140 for more information.

Excerpts from Rampa's writings, advocacy of his views