DNA Lounge is a late-night, all ages nightclub in the SoMa district of San Francisco owned by Jamie Zawinski, a former Netscape programmer and open-source software hacker.[1] The club features DJ dancing, live music, burlesque performances, and occasionally conferences, private parties, and film premieres. It is located at 375 Eleventh Street, near Harrison Street.

The club consists of a large main dance floor and stage, surrounded on three sides by a balcony, open to below. There is also a back room with its own dance floor and separate sound system. There are three full bars, and a full kitchen, serving Mexican food. DNA Lounge also has a number of unconventional features, including a free wireless network for internet access. The club also provides continuous audio and video webcasts of all events free of charge.

From 2001 through 2009, the club also provided several publicly accessible computer terminals (running Fedora). They were eventually removed due to maintenance difficulties, and a belief that the prevalence of internet-enabled phones made them obsolete.[2] 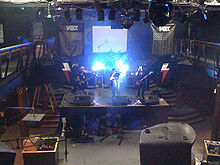 The venue first opened for business in 1977 as a leather bar called Chaps, owned by Chuck Slaton.

In 1985 it was purchased by Jim English, Jeff Mason, and Brian Raffi who opened for business under the name DNA Lounge on November 22, 1985. The name was rumored to be an acronym for "dancing, not art". The earliest regular DJs were Ted Cousens, Adam Fisher, and Brian Raffi. One of the early doormen was Doc Martin, who later became a popular house music DJ. Some nights were genre-specific, with both live bands and DJs. Notable nights and resident DJ's included DJs Blackstone (who spun hip-hop and rap on Wednesday nights), DJ Damon (who spun alternative and industrial) and Kelly Spencer (who played punk and new wave on Tuesdays). Many of DNA's posters and flyers were designed by the San Francisco-based artist, Rex Ray. There were wildly psychedelic, fluorescent murals of strange and twisted monsters with stretched perspectives on the otherwise black downstairs walls and a black and white motif in the upstairs VIP lounge that was painted by celebrated late graffiti artist Keith Haring.

During the early 90s, the DNA offered a black membership card for $10 that offered free entry most nights. Employees got a gold card which allowed up to four guests at no charge, and there was a rumored 'platinum' card that was said to be a free pass to unlimited entry, guests, and drinks. It hosted many rave-themed nights with acts including Right Said Fred, the Hardkiss Brothers and Tasti Box, and afterhours events such as Lift- it was an important venue in San Francisco rave history. The DNA Lounge was also one of the few bars in San Francisco that would serve the Flaming Dr Pepper, an ignited drink.

In 1994, the club was purchased by Tim Dale, John Schneider, and comedian/actor Rob Schneider. From 1995 until 1998, the DNA was a popular late-night destination, featuring unpublicized shows by such top pop musicians as Prince and Metallica, and weekend dance parties headlined by retro bands Grooveline and the M-80s. But, starting in 1996, the Schneiders had to devote the bulk of their time to Rob's TV sitcom Men Behaving Badly. They left the daily operations of the club to subordinates, and it fell into disrepair.[3]

The club was purchased by Jamie Zawinski in 1999. The club was closed for extensive remodeling and soundproofing from April 1999 until it re-opened on Friday, July 13, 2001.[4]

In 2011, Zawinski purchased the pizza restaurant next door to DNA Lounge, renaming it DNA Pizza, and announcing his plans to expand DNA Lounge into that space, combining the two businesses into a single all-ages nightclub, restaurant and cafe.[5]

During the period that DNA Lounge was closed, Zawinski spearheaded a successful grassroots effort to maintain its late-night permits,[6] facing opposition from several neighbors and the SFPD, but was unable to procure an all-ages license. In September 2008, after two and a half years of legal battles, the club's operating permits were successfully modified to allow patrons of all ages, instead of only those 21 years of age or older.[7]

The California Department of Alcoholic Beverage Control (ABC) launched an investigation against the club in 2009, resulting in an accusation of "running a disorderly house injurious to the public welfare and morals", and asking for permanent revocation of the club's liquor license, which would result in the club closing permanently.[8]

The accusations pertain to lewd behavior at certain gay and lesbian events which no longer take place at the club. Members of the community[9] were outraged by the ABC's allegations and the severity of their proposed punishment. Many complained that ABC was unfairly targeting DNA lounge, and their homosexual clientele in particular, pointing out that the specific allegations are far less "lewd" than the standard behavior at heterosexual strip clubs.[10] ABC has not commented on this accusation. Many have claimed that ABC's punishment is in retaliation to DNA's successful appeal to receive an all-ages liquor license, and that this appears to be part of a larger shift in policy by the ABC to crack down on all-ages music venues.[11]

In April 2009, ABC ruled to revoke DNA Lounge's liquor license. DNA promptly filed an appeal citing insufficient evidence in the ABC's case as well as challenging the constitutionality of ABC's code[12] that pertain to regulating sexual behavior and morality.[13] DNA Lounge remained in business, pending resolution of their appeal, and they have set up a legal defense fund soliciting donations to help offset the cost of contesting the decision.[14] On November 10, 2009, a settlement was announced, reducing the revocation of their license down to a 25-day suspension, effective January 4, 2010.[15]

On November 22, 2010, the date of DNA Lounge's 25th anniversary, the San Francisco Board of Supervisors issued a resolution proclaiming that day to be "DNA Lounge Day",[20] "to convey the City's sincere respect for their ability to successfully run an entertainment business for the past 25 years."

On the same day, San Francisco Mayor Gavin Newsom presented the club with a Certificate of Honor, stating that the club "contributes to the rich cultural history of San Francisco's entertainment scene and our beloved historic South of Market District."[20]

The space functions as a venue for both live music and regular dance nights.

DNA Lounge has also hosted several notable tech-industry events, such as CodeCon (a hacker con) and Ignite (a technology conference). The release of Mozilla 1.0 was celebrated there in 2002. Cypress Hill's music video for "Insane in the Brain" was filmed at DNA Lounge in 1993.[22][23] In the background of some shots can be seen parts of the Keith Haring mural that used to adorn the walls of the upstairs lounge. The title sequence of the SingStar Amped video game was shot at DNA Lounge in 2007.[24][25]

DNA Lounge has been well known for both DJ dance nights and live concerts. Since the club was purchased by Zawinski, they have been focusing more on live music,[26] and in 2008 they procured an all-ages liquor license to facilitate this. Currently, dance events are generally 21+, but most live shows are all ages.[27] Concert highlights since 1985[28][29] include: