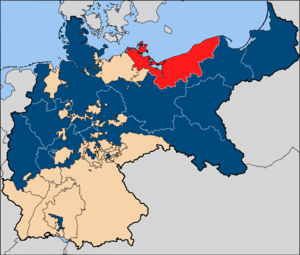 The Province of Pomerania ( _de. Provinz Pommern) was a province of the and the from 1815 until 1946. It was created from and ("Hither" or ""), which were created from the Duchy of Pomerania after the in 1648 and had belonged to and , respectively. Sweden had awarded her part of Pomerania to by the in 1814, but the treaty never entered into force and the territory was passed to Prussia by the the following year.

The province was subdivided into the superior administrative districts () Köslin (Eastern part, "Farther Pomerania"), Stettin (Southwestern part, "Altvorpommern"), Stralsund (Northwestern part, "Neuvorpommern"; merged into Stettin in October 1, 1932), and Grenzmark Posen-Westpreußen (Southeastern part, created from the former Prussian province when it was merged into Pomerania in October 1, 1938). The Province's capital was ("now Szczecin"), the "Regierungsbezirk" capitals were ("now Koszalin"), Stettin, and ("now Pila"), respectively.

After , Pomerania was part of the . The section of Pomerania east of the was ceded to Poland and resettled with Poles after the German population was expelled. The territory west of the Oder-Neisse line became part of the East Germany in 1949 and was merged with to form the new state of .

The Köslin government region ("Regierungsbezirk Köslin") was the administrative name for the region of ("Hinterpommern") along with the smaller region of (easternmost part).

These parts of Pomerania were integrated into Prussia ("") after the ended the in 1648. During the war, the noble ("Griffins"), ruling Pomerania since the 1120s as Dukes of Pomerania, went extinct in the male line with the death of Bogislaw XIV in 1637. Throughout the existence of the Griffin duchy, Brandenburg claimed overlordship and was asserted of Pomerania inheritance in numerous treaties. Yet, had been one of the most important players in the war and as such, she was awarded some of her territorial gains in Pomerania after the war by the Peace of Westphalia, thwartening Brandenburg-Prussia's ambitions for inheritance of the whole former Duchy of Pomerania. This led to tensions between Brandenburg-Prussia and Sweden in Pomerania until Sweden lost her n possessions in 1720 and 1815.

comprised the , a n borderland with a somewhat different history than the rest of Pomerania. It was in 1846 dissolved into smaller administrative units. In contrast to ethnic German Pomerania, this area also had a Kashubian population.

comprised the earlier secular possessions of the bishops, ruled by Pomeranian dukes after the . Until 1872, the area kept its territorial integrity, before it was dissolved into smaller administrative units.

The area was held by after the , when Sweden had occupied all of the former Duchy of Pomerania in 1631. In the , a treaty about an alliance between the last Pomeranian duke Bogislaw XIV and the Swedish king Gustavus (II) Adolphus, Bogislaw acknowledged Swedish succession over his duchy despite century-old Brandenburg claims. In the 1648 , Western Pomarania officially became a part of Sweden. Brandenburg-Prussia succeeded in taking over Swedish Pomerania during the (1674–1679, a war arisen between Brandenburg and Sweden being enemy parties in the contemporary ), yet in the , Sweden regained Western Pomerania except some areas on the right bank of the River, which had been agreed to hand over to Brandenburg already in a 1653 border revision. This tempted , to utter "Exoriare aliquis nostris ex ossibus ultor!" [Büchmann, Geflügelte Worte] .

Stettin, the former ducal residence, was made capital of the province and also was the administrative center of the Regierungsbezirk Stettin.

During , Pomerania became a battlefield and was occupied by the after the Soviet advances in the course of the . By the terms of the , Western Pomerania east of the became part of . This line left the river north of and included the and area ("Stettiner Zipfel") into the Polish state. The remaining German population was expelled and the area was resettled with Poles. Western Pomerania west of the Oder-Neisse line was merged with to constitute the state of in the of Germany, that in 1949 became the (GDR). "Vorpommern" was soon dropped from the federal state's name, and after the GDR states were abolished, the coastal Western Pomeranian Landkreis districts became part of whereas the mainland Landkreis districts became part of .

In 1990, after the GDR communist system was overthrown, the state of was recreated, with Vorpommern being a non-administrative region. The old Landkreis districts were fused into five larger districts: Rügen, , , Uecker-Randow and Demmin, whith the latter also containing ian Landkreis districts. Due to this and slight Landkreis border changes during the GDR period, the old Pomeranian border disappeared from the map and today is only prevailed by the border of the .

The reason for creating a Regierungsbezirk as small as Stralsund was that Neuvorpommern had a somewhat different history than the rest of Pomerania. This region, consisting of the island of and the adjacted mainland between the and rivers, made up the Rani and Danish in the . Although it was inherited by the Pomeranian dukes in 1325, the region was for some time goverened as the splinter duchy of Pomerania-Barth. While a part of , maintained her old claims and occupied the area in 1715 during the . Yet, the Danes were forced to return it to Sweden by the 1720 . In the 1813 , Denmark again gained nominal overlordship, yet was unable to pay her war reparations to Sweden and awarded her claim to in the 1815 along with her debts in exchange for the .

Following , most of the Prussian provinces Posen and became part of reconstituted . The remainders of these provinces formed the province of Posen-West Prussia, combining small German-settled regions all along the new German-Polish border ("Grenzmark" meaning "border march"). In 1938, this province was dissolved and partitioned between Pomerania, Brandenburg and Silesia. The Pomeranian share was extended by Landkreis Neustettin, formally administered by Regierungsbezirk Stettin.

During , it became a battlefield and was occupied by the in early 1945. By the terms of the , the Grenzmark became part of . The German population was expelled and the area was resettled with Poles.