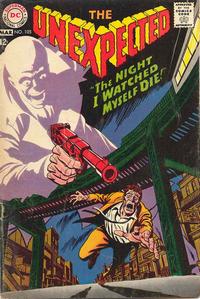 Unlike the predecessor, it was more of a fantasy anthology at first, then turned into a weird/horror anthology in the style of "" and "". With issue #189, "House of Secrets" and "The Witching Hour" were merged into "The Unexpected". Each "Unexpected" story would always include the word in its last panel. After the merge, this was only true of the lead story; there would then be one each in the style of "The Witching Hour", hosted by its witches, and "The House of Secrets", hosted by Abel.