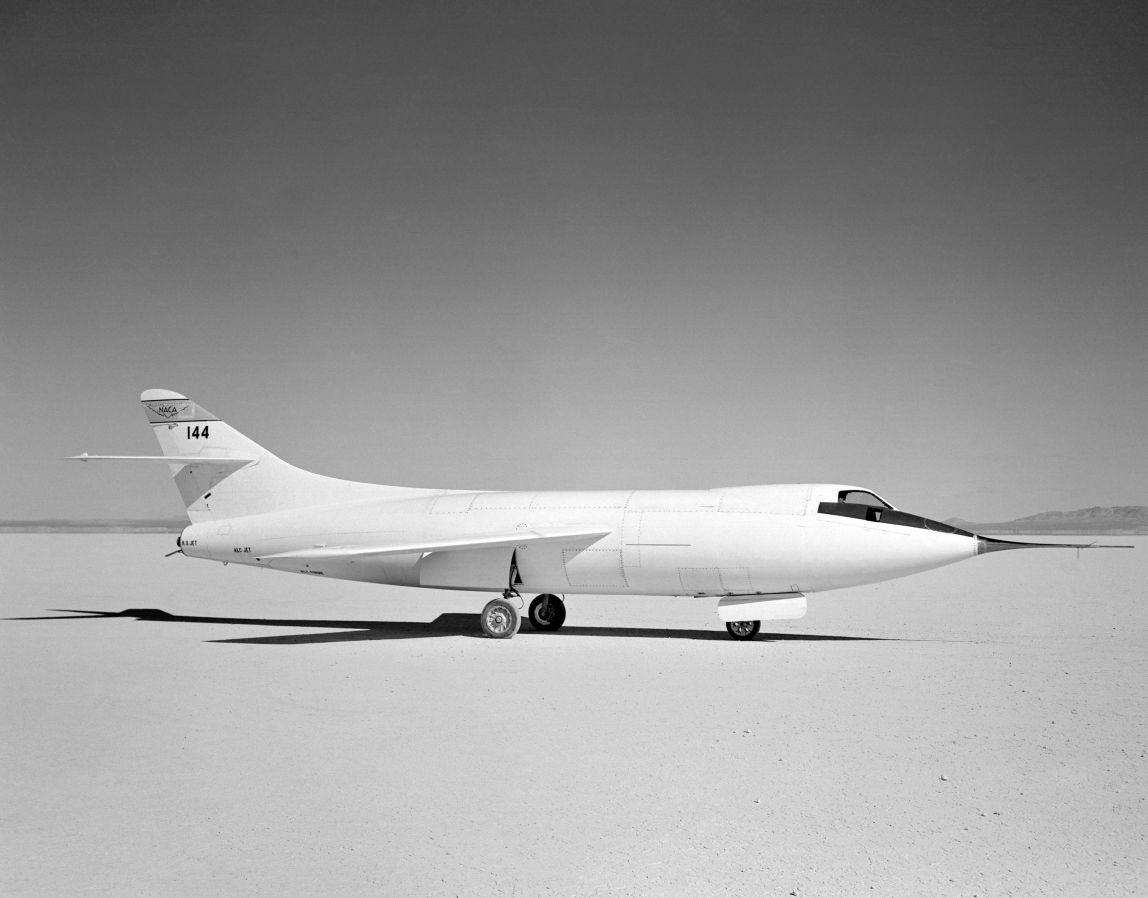 The Douglas Skyrocket (D-558-2 or D-558-II) was a rocket and jet-powered supersonic research aircraft built by the for the . On , , shortly before the 50th anniversary of powered flight, Scott Crossfield piloted the Douglas D-558-2 Skyrocket to Mach 2, or more than 1,290 mph (2076 km/h), the first time an aircraft had exceeded twice the speed of sound.

The "-2" in the aircraft's designation referred to the fact that the Skyrocket was the phase-two version of what had originally been conceived as a three-phase program. The phase-one aircraft, the D-558-1, was jet powered and had straight wings. The third phase, which never came to fruition, would have involved constructing a of a combat type aircraft embodying the results from the testing of the phase one and two aircraft. The eventual D-558-3 design, which was never built, was for a hypersonic aircraft similar to the .

When it became obvious that the D558-1 fuselage could not be modified to accommodate both rocket and jet power, the D558-2 was conceived as an entirely different aircraft [http://65.165.5.234/lb/centers/dryden/news/FactSheets/FS-035-DFRC.html Dryden Flight Research Center D-558-II Fact Sheet] . A contract change order was issued on to formally drop the final three D558-1 aircraft and substitute three new D558-2 aircraft instead

The Skyrocket featured wings with a 35-degree sweep and horizontal stabilizers with 40-degree sweep. The wings and empennage were fabricated from aluminum and the large fuselage was of primarily magnesium construction. The Skyrocket was powered by a Westinghouse J34-40 turbojet engine fed through side intakes in the forward fuselage. This engine was intended for takeoff, climb and landing. For high speed flight, a four-chamber LR8-RM-6 engine (the Navy designation for the Air Force's XLR-11 used in the ), was fitted. This engine was rated at 6,000 lbf (27 kN) static thrust at sea level. A total of 250 gallons (946 liters) of aviation fuel, 195 gallons of alcohol, and 180 gallons of liquid oxygen were carried in fuselage tanks.

The Skyrocket was configured with a flush cockpit canopy, but visibility from the cockpit was poor, so it was re-configured with a raised cockpit with conventional angled windows. This resulted in a greater profile area at the front of the aircraft, which was balanced by an additional 14 inches (36 cm) of height added to the vertical stabilizer. Like its predecessor, the D558-1, the D558-2 was designed so that the forward fuselage, including cockpit, could be separated from the rest of the aircraft in an emergency. Once the forward fuselage had decelerated sufficiently, the pilot would then be able to escape from the cockpit by parachute.

Douglas pilot made the first flight at (later renamed ) in California on in an aircraft equipped only with the jet engine. The goals of the program were to investigate the characteristics of swept-wing aircraft at transonic and supersonic speeds with particular attention to pitch-up (un-commanded rotation of the nose of the aircraft upwards), a problem prevalent in high-speed service aircraft of that era, particularly at low speeds during takeoff and landing, and in tight turns.

The three aircraft gathered a great deal of data about pitch-up and the coupling of lateral (yaw) and longitudinal (pitch) motions; wing and tail loads, lift, drag and buffeting characteristics of swept-wing aircraft at transonic and supersonic speeds; and the effects of the rocket exhaust plume on lateral dynamic stability throughout the speed range. (Plume effects were a new experience for aircraft.) The number three aircraft also gathered information about the effects of external stores (bomb shapes, drop tanks) upon the aircraft's behavior in the transonic region (roughly 0.7 to 1.3 times the speed of sound). In correlation with data from other early transonic research aircraft such as the , this information contributed to solutions to the pitch-up problem in swept-wing aircraft.

NACA aircraft 143 was initially powered by the jet engine only, but was later fitted with the rocket engine. In this configuration, it was tested by Douglas from 1949 to 1951. After Douglas' test program, it was delivered to NACA, who stored it until 1954. In 1954-55 the contractor modified it to an all-rocket air-launch capability with the jet engine removed. In this configuration, NACA research pilot John McKay flew the aircraft only once for familiarization on . The 123 flights of NACA 143 served to validate wind-tunnel predictions of the aircraft's performance, except for the fact that the aircraft experienced less drag above Mach 0.85 than the wind tunnels had indicated.

NACA 144 also began its flight program with a turbojet powerplant. NACA pilots and flew 21 times in this configuration to test airspeed calibrations and to research longitudinal and lateral stability and control. In the process, during August 1949 they encountered pitch-up problems, which NACA engineers recognized as serious because they could produce a limiting and dangerous restriction on flight performance. Hence, they determined to make a complete investigation of the problem.

In 1950, Douglas replaced the turbojet with an LR-8 rocket engine, and its pilot, Bill Bridgeman, flew the aircraft seven times up to a speed of Mach 1.88 (1.88 times the speed of sound) and an altitude of 79,494 ft (24,230 m), the latter an unofficial world's altitude record at the time, achieved on . In the rocket configuration, a Navy P2B (Navy version of the B-29) launched the aircraft at approximately convert|30000|ft|m|-3 after taking off from the ground with the Skyrocket attached beneath its bomb bay. During Bridgeman's supersonic flights, he encountered a violent rolling motion known as lateral instability that was less pronounced on the Mach 1.88 flight on , than on a Mach 1.85 flight in June when he pushed over to a low angle of attack (angle of the fuselage or wing to the prevailing wind direction).

The NACA engineers studied the behavior of the aircraft before beginning their own flight research in the aircraft in September 1951. Over the next couple of years, NACA pilot Scott Crossfield flew the aircraft 20 times to gather data on longitudinal and lateral stability and control, wing and tail loads, and lift, drag, and buffeting characteristics at speeds up to Mach 1.878.

Following Carl's completion of these flights for the Navy, NACA technicians at the High-Speed Flight Research Station (HSFRS) near Mojave, California, outfitted the LR-8 engine's cylinders with nozzle extensions to prevent the exhaust gas from affecting the rudders at supersonic speeds. This addition also increased the engine's thrust by 6.5 percent at Mach 1.7 and 70,000 feet (21,300 m).

Even before Marion Carl had flown the Skyrocket, HSFRS Chief Walter C. Williams had petitioned NACA headquarters unsuccessfully to fly the aircraft to Mach 2 to garner the research data at that speed. Finally, after Crossfield had secured the agreement of the Navy's Bureau of Aeronautics, NACA director Hugh L. Dryden relaxed the organization's usual practice of leaving record setting to others and consented to attempting a flight to Mach 2.

In addition to adding the nozzle extensions, the NACA flight team at the HSFRS chilled the fuel (alcohol) so more could be poured into the tank and waxed the fuselage to reduce drag. With these preparations and employing a flight plan devised by project engineer Herman O. Ankenbruck to fly to approximately 72,000 feet (21,900 m) and push over into a slight dive, Crossfield made aviation history on , when he flew to Mach 2.005, 1,291 miles per hour (2,078 km/h). He became the first pilot to reach Mach 2 in this, the only flight in which the Skyrocket flew that fast.

Following this flight, Crossfield and NACA pilots and flew the aircraft for such purposes as to gather data on pressure distribution, structural loads, and structural heating, with the last flight in the program occurring on , when McKay obtained dynamic stability data and sound-pressure levels at transonic speeds and above.

Meanwhile, NACA 145 had completed 21 contractor flights by Douglas pilots and William Bridgeman in November 1950. In this jet-and-rocket-propelled craft, Scott Crossfield and Walter Jones began the NACA's investigation of pitch-up lasting from September 1951 well into summer 1953. They flew the Skyrocket with a variety of wing-fence, wing-slat and leading edge chord extension configurations, performing various maneuvers as well as straight-and-level flying at transonic speeds. While fences significantly aided recovery from pitch-up conditions, leading edge chord extensions did not, disproving wind-tunnel tests to the contrary. Slats (long, narrow auxiliary airfoils) in the fully open position eliminated pitch-up except in the speed range around Mach 0.8 to 0.85.

In June 1954, Crossfield began an investigation of the effects of external stores (bomb shapes and fuel tanks) upon the aircraft's transonic behavior. McKay and completed the NACA's investigation of this issue, with McKay flying the final mission on .

Besides setting several records, the Skyrocket pilots had gathered important data and understanding about what would and would not work to provide stable, controlled flight of a swept-wing aircraft in the transonic and supersonic flight regimes. The data they gathered also helped to enable a better correlation of wind-tunnel test results with actual flight values, enhancing the abilities of designers to produce more capable aircraft for the armed services, especially those with swept wings. Moreover, data on such matters as stability and control from this and other early research aircraft aided in the design of the of fighter aircraft, all of which featured the movable horizontal stabilizers first employed on the X-1 and D-558 series.

All three of the Skyrockets had 35-degree swept wings.