David Marshall Williams (November 13, 1900–January 8, 1975), also known as Carbine Williams was an American designer of the short-stroke piston used in the M1 Carbine as well as the floating chamber operating system for firearms.

David Marshall Williams was born in Cumberland County, North Carolina. He was the eldest of seven children. As a young boy, he worked on his family's farm. He dropped out of school after eighth grade and began work in a blacksmith shop, served a short stint in the Navy, but was discharged because he lied about his age. After returning from the Navy, he spent a semester at Blackstone Military Academy before being expelled.[1]

In 1918, he married Margaret Cooke and they later had one child, David Marshall, Jr. Williams worked for Atlantic Coast Line Railroad, but on the side he had an illegal distillery near Godwin, North Carolina.[2] During a raid on this still on July 22, 1921, a deputy sheriff named Alfred Jackson Pate was shot and killed, and Williams was charged with first degree murder. The trial ended in a hung jury, but Williams decided to plead guilty to a lesser charge of second degree murder. He was given a 20 to 30 year sentence.[1] 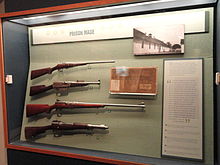 Early carbines created while in prison

While serving time at the Caledonia State Prison Farm in Halifax County, North Carolina, Williams related that the superintendent, H.T. Peoples, noted his mechanical aptitude and allowed him access to the prison’s machine shop where he demonstrated a knack for fashioning replacement parts for the guards’ firearms from pieces of scrap and automobile parts. In prison, he would save paper and pencils and stay up late at night drawing plans for various firearms. His skills in the machine shop permitted him to stay ahead of his assignments and allowed him time for his own hobby. He began building lathes and other tools, and then parts for guns. His mother sent him technical data on guns and also provided him with contacts with patent attorneys. While in prison, he developed ideas for self-loading firearms. Patents were subsequently filed for the floating chamber (published in 1937)[3] and for a short-stroke piston (published in 1944).[4] The family started a campaign to commute his sentence and they were joined by the sheriff to whom he had surrendered and the widow of the man he was accused of killing. Governor Angus McLean reduced the sentence and in 1929 Williams went on parole and in 1931 he was released from prison.

Back in Cumberland County, he set to work perfecting his inventions. After two years, he went to Washington, DC to show his work to the War Department. He got his first contract to modify the .30 caliber Browning machinegun using the floating chamber system to fire .22 caliber rimfire ammunition to facilitate inexpensive training. The Williams floating chamber was also applied to the .45 1911 automatic pistol to function with .22 ammunition (the Colt Ace .22 pistol and Ace conversion kit for .45 pistols).

General Julian Hatcher was impressed by Williams' work and recommended Williams to Winchester Repeating Arms in 1938 as showing the greatest native ability of anyone he knew of. Williams was employed by Winchester on 1 July 1939, where he applied his design of a short-stroke tappet gas piston system to resolve loading problems of a Browning prototype .30-06 M2 rifle.[5] At the urging of Col. Rene Studler, a team at Winchester scaled down Williams' M2 rifle design to produce the Winchester prototype for the M1 carbine. The M1 carbine was manufactured in greater numbers than any other United States small arm of World War II. Winchester entered a license agreement to use Williams' designs during development of the M2 rifle prototype; but disagreements between Williams and Winchester management continued until Williams left Winchester during the Korean War. From the start, Williams had disliked being bound to a team, and preferred to work on his own (see Wikipedia article on the M1 Carbine). Several improvements he made on his own original design for the carbine were later determined to be excellent, but he presented them too late to the Army, which was in a hurry to get the finished weapon into use by the combat troops. Later, Winchester discovered what might have been an earlier patent for a short-stroke piston; but Williams' floating chamber U.S. Patent 2,090,656 appeared to be an original invention, and Winchester decided against litigation.[1] The floating chamber and the short-stroke piston remain to this day Williams' two very significant contributions to the improvement of firearms in particular.

In 1952, MGM released a film loosely based on his life starring James Stewart and Jean Hagen as his wife Maggie; Williams served as a technical advisor.[6] The movie brought Williams his widest fame; and he became known by the nickname, "Carbine" Williams after release of the movie. He spent his last years in Godwin after some time in Connecticut. He died at Dorothea Dix Hospital in Raleigh, North Carolina, on 8 January 1975. 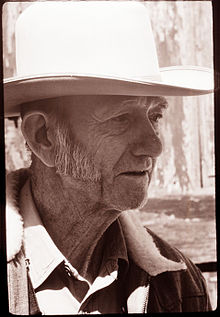 Williams' floating chamber, used in the military .22 training versions of the Browning machinegun and Colt automatic pistol, was used in the Remington 550-A, a popular .22 semi-automatic sporting rifle (the floating chamber allowed the Model 550 to function semi-automatically with .22 Short as well as .22 Long and .22 Long Rifle ammunition). Later, in 1954, the Winchester Model 50 Automatic shotgun was launched. This, too, featured the Williams Chamber, making it the first recoil operated semi-automatic shotgun with a non-recoiling barrel. The U.S. patents for the highly successful Benelli Shotgun (U.S. Patent 4,604,942) reference Williams' U.S. Patent 2,476,232.

Williams' inventions went beyond firearms development. He invented a non-sagging clothesline, an electric can opener (based on his floating chamber idea), and a mousetrap. He held over 50 patents for his ideas.