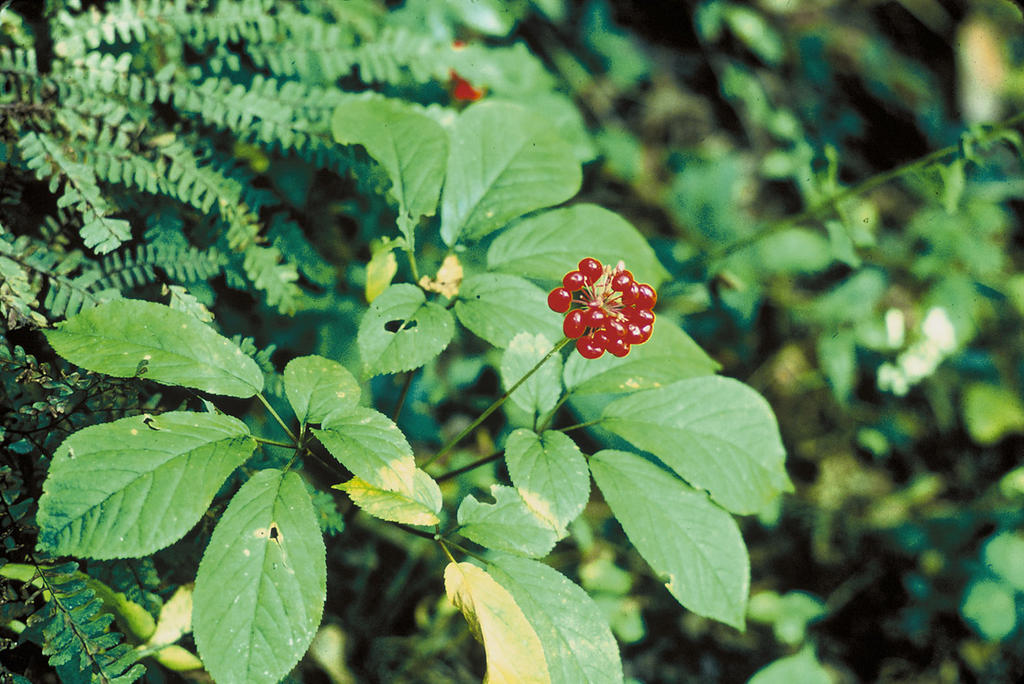 Ginseng refers to species within "Panax", a genus of 11 species of slow-growing s with fleshy roots, in the family . They grow in the in eastern (mostly northern , , and eastern ), typically in cooler climates; "Panax vietnamensis", discovered in , is the southernmost ginseng found. This article focuses on the Series Panax ginsengs, which are the ic herbs, principally "Panax ginseng" and "P. quinquefolius". Ginseng is characterized by the presence of .

Siberian ginseng ("Eleutherococcus senticosus") is not a true ginseng at all. It is another adaptogen, but a different plant that was renamed as "Siberian ginseng" as a marketing ploy; instead of a fleshy root, it has a woody root; instead of s, are present, (see below).

The botanical/genus name "Panax" means "all-heal" in Greek, sharing the same origin as "," and was applied to this genus because was aware of its wide use in as a muscle relaxant.

This ingredient may also be found in some popular : usually the "tea" varieties or Functional Foods. Usually ginseng is in subclinical doses and it does not have measurable medicinal effects. It can be found in cosmetic preparations as well, with similar lack of effect.

Ginseng root can be double steamed with chicken meat as a soup. (See .)

It has been difficult to verify the medicinal benefits of ginseng using science, as there are contradictory results from different studies, possibly due to the wide variety and quality of ginseng used in studies. High-quality studies of the effects of ginseng are rare.

Ginseng is promoted as an (a product that increases the body's resistance to stress), one which can to a certain extent be supported with reference to its anticarcinogenic and antioxidant properties,

A , randomized and study at the National Autonomous University of Mexico indicates it may be "a promising dietary supplement" when assessed for an increase in quality of life

"P. ginseng" appear to inhibit some characteristics associated with cancer in animal models; nevertheless, this effect is unclear in humans.

There are references in literature, including authoritative compendiums, that show interactions with ginseng. Herbalist Jonathan Treasure of the United States traces the growth of misinformation on an alleged adverse herb-drug interaction between the monoamine oxidase inhibitor and Asian ginseng ("P. ginseng" C.A. Meyer). This originally was mentioned in a 1985 editorial by Shader and Greenblatt in the Journal of Clinical Psychopharmacology. Shader and Greenblatt devoted a couple of lines to the case of 64 year-old woman who took an undisclosed dose for an undisclosed time of a dietary supplement product called “Natrol High” while concurrently taking 60 mg qd. She experienced symptoms of “insomnia, headache, and tremulousness”. Treasure contacted Natrol by email and discovered within ten minutes that there was no "P. ginseng" in the formula, but instead "" which was then called by the popular name "Siberian ginseng" and it was given in a subclinical dosage mixed with a variety of other herbs. The purported interaction effects are well-known side effects of phenelzine alone, which had been given in a high dosage and are not at all suggestive of "Eleutherococcus". However this misinformed article with a misidentified herb has been picked up in literature searches, megastudies and is now documented by conventional medical authorities such as Stockley’s, and is repeated in several botanical monographs e.g. World Health Organization (WHO1999). [ [http://www.herbological.com/images/downloads/HH2.pdf] Treasure, Jonathan. "Medline & The Mainstream Manufacture of Misinformation" 2006] [Stockley, IH (2002), Stockley's Drug Interactions. 6th ed. London: Pharmaceutical Press.] [WHO (1999), "Radix Ginseng", in,WHO Monographs on Selected Medicinal Plants, Geneva: World Health Organization, 168-182.]

A 2002 study by the Southern Illinois University School of Medicine (published in the annals of the New York Academy of Sciences) found that in laboratory animals, both Asian and American forms of ginseng enhance and copulatory performance. These effects of ginseng may not be due to changes in hormone secretion, but to direct effects of ginseng, or its ginsenoside components, on the central nervous system and gonadal tissues. [Hong B; Ji YH; Hong JH; Nam KY; Ahn TYA double-blind crossover study evaluating the efficacy of korean red ginseng in patients with erectile dysfunction: a preliminary report.J Urol. 2002; 168(5):2070-3 (ISSN: 0022-5347)Department of Urology, University of Ulsan College of Medicine, Asan Medical Center, Seoul, Korea] In males, ginsenosides can facilitate penile erection. [de Andrade E; de Mesquita AA; Claro Jde A; de Andrade PM; Ortiz V; Paranhos M; Srougi MStudy of the efficacy of Korean Red Ginseng in the treatment of erectile dysfunction.Sector of Sexual Medicine, Division of Urological Clinic of Sao Paulo University, Sao Paulo, Brazil.] This is consistent with traditional and Native American medicinal uses of ginseng.

The common ginsengs ("P. ginseng" and "P. quinquefolia") are generally considered to be relatively safe even in large amounts.

"P. ginseng" is not recommended within Chinese Medicine to be administered along with anti-infective herbs unless a person is quite debilitated, because of the fear that the pathogen will be tonified. Herbalists in China believed this and according to Xu Dachun in his brief essay on ginseng (1757 A.D., during the Qing Dynasty):"if one administers Ginseng of a purely supplementing nature, then one will merely supplement the evil influences and help them settle down. In minor cases, the evil influences will, as a result of such mistaken therapy, never leave the body again. In serious cases, death is inevitable." [ [http://www.itmonline.org/arts/ginseng.htm http://www.itmonline.org/arts/ginseng.htm] ]

:Ginseng that is produced in the and is particularly prized in Chinese societies, and many ginseng packages are prominently colored red, white, and blue.:According to , American Ginseng promotes energy, cleans excess in the body, calms the body. The reason it has been claimed that American ginseng promotes Yin (shadow, cold, negative, female) while East Asian ginseng promotes Yang (sunshine, hot, positive, male) is that, according to , things living in cold places or northern side of mountains or southern side of rivers are strong in Yang and vice versa, so that the two are balanced. Chinese/Korean ginseng grows in northeast China and Korea, the coldest area known to many Koreans in traditional times. Thus, ginseng from there is supposed to be very "Yang". Originally, American ginseng was imported into China via subtropical , the seaport next to , so Chinese doctors believed that American ginseng must be good for "Yin", because it came from a hot area. However they did not know that American ginseng can only grow in temperate regions. Nonetheless the root is legitimately classified as more "Yin" because it generates fluids. [Chinese Herbal Medicine: Materia Medica, Third Edition by Dan Bensky, Steven Clavey, Erich Stoger, and Andrew Gamble 2004]

:The two main components of ginseng are in different proportions in the Asian and American varieties, and may well be the cause of the excitatory versus tonic natures. [http://en.wikipedia.org/wiki/Ginsenoside#Mechanism_of_action]

:The ginseng is sliced and a few slices are simmered in hot water to make a .:Most North American ginseng is produced in the Canadian provinces of and and the American state of , according to [http://www.agr.gc.ca/misb/spec/index_e.php?s1=gin&page=intro Agri-food Canada] . "P. quinquefolius" is now also grown in northern China.:A randomized, study shows that an extract of American ginseng reduces influenza cases in the elderly when compared to placebo.

The treasured aromatic root resembles a small parsnip that forks as it matures. The plant grows 6 to 18 inches tall, usually bearing three leaves, each with three to five leaflets 2 to 5 inches long.

:The form called white ginseng is grown for four to six years, and then peeled and dried to reduce the water content to 12% or less. White Ginseng is air dried in the sun and may contain less of the therapeutic constituents. It is thought by some that enzymes contained in the root break down these constituents in the process of drying. Drying in the sun bleaches the root to a yellowish-white color.

:The form called red ginseng is harvested after six years, is not peeled and is steam-cured, thereby giving them a glossy reddish-brown coloring. Steaming the root is thought to change its biochemical composition and also to prevent the breakdown of the active ingredients. The roots are then dried.

Red ginseng (Korean=홍삼, zh-st|s=|t=), is "P. ginseng" that has been heated, either through steaming or sun-drying. It is frequently marinated in an herbal brew which results in the root becoming extremely brittle. This version of ginseng is traditionally associated with stimulating sexual function and increasing energy. Red ginseng is always produced from cultivated roots, usually from either China or South Korea.

In , a preliminary , crossover study of Korean red ginseng's effects on reported that it can be an effective alternative for treating male erectile dysfunction.

A study shows that Red ginseng reduces the relapse of gastric cancer versus control.

A study of ginseng's effects on rats shows that while both "White ginseng" and "Red ginseng" reduce the incidence of cancer, the effects appear to be greater with "Red ginseng".

Wild ginseng is ginseng that has not been planted and cultivated domestically, rather it is that which grows naturally and is harvested from wherever it is found to be growing. It is considered to be superior to field farmed ginseng by various authorities, and it has been shown to contain higher levels of . Wild ginseng is relatively rare and even increasingly endangered, due in large part to high demand for the product in recent years, which has led to the wild plants being sought out and harvested faster than new ones can grow (it requires years for a ginseng root to reach maturity). Wild ginseng can be either Asian or American and can be processed to be red ginseng.

There are American ginseng programs in Maine, Tennessee, Virginia, North Carolina and West Virginia. [ [http://www.state.tn.us/environment/na/ginseng.shtml TDEC: DNH: Ginseng Program ] ] [ [http://www.ces.ncsu.edu/depts/hort/hil/hil-127.html Care and Planting of Ginseng Seed and Roots ] ] and has been encouraging the woods planting of ginseng both to restore natural habitats and to remove pressure from any remaining wild ginseng, and they offer both advice and sources of rootlets. Woods grown plants have comparable value to wild grown ginseng of similar age.

These mostly ic plants are sometimes referred to as ginsengs, but they are either from a different or . Only Jiaogulan actually contains compounds closely related to ginsenosides, although ginsenosides alone do not determine the effectiveness of ginseng. Since each of these plants have different uses, one should research their properties before using. Descriptions and differentiation can be found in David Winston and Steven Maimes book "Adaptogens" [cite book |title=Adaptogens: Herbs for Strength, Stamina, and Stress Relief |last= Winston |first= David |authorlink=David Winston |coauthors=Maimes, Steven |year = 2007 |publisher= Healing Arts Press|location= |isbn= |pages= ]

Other plants which are referred to as ginsengs may not be adaptogens (although notoginseng is in the Panax Series):